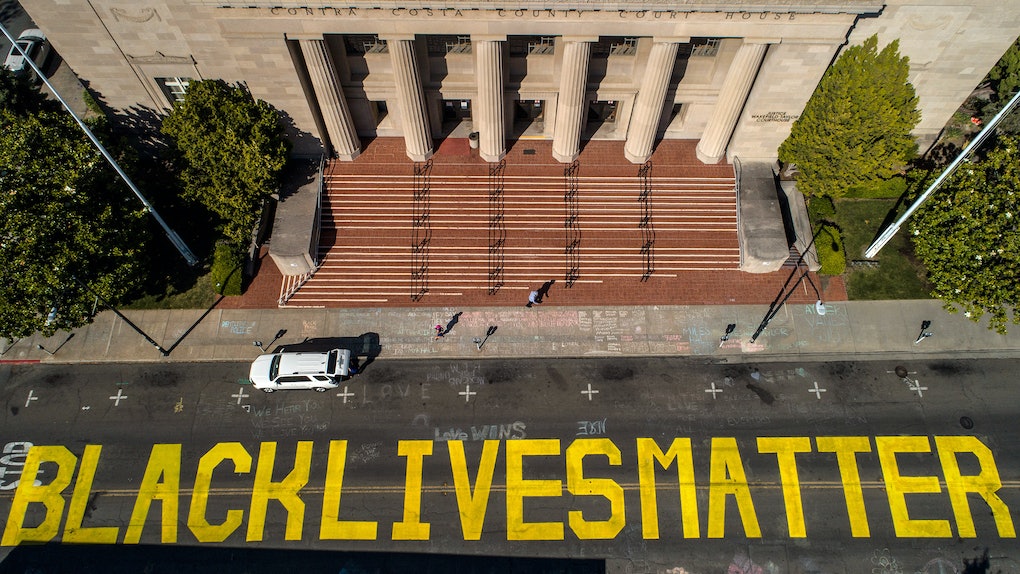 Nationwide protests for racial justice are ongoing following the police killings of Black people including George Floyd, Breonna Taylor, Tony McDade, and Elijah McClain, as well as the killing of Ahmaud Arbery by two white men. Now, to hit American social and economic systems where it hurts, activists are calling for nationwide labor strike on Monday, July 20. Here's what to know about the Strike for Black Lives and how you can get involved.

The Strike for Black Lives calls for Black workers and allies to walk off the job to magnify their calls for anti-racist changes to society and push back against the exploitation of Black workers. Organized by the Movement for Black Lives, the Strike for Black Lives is set to take place in more than 25 U.S. cities in the hopes of putting pressure on big corporations to allow workers to form unions and to raise wages. The strike already has the support of prominent unions, including the American Federation of Teachers (AFT), Service Employees International Union (SEUI), and Communications Workers of America (CWA), among other unions and organizations. Elite Daily reached out to the AFT, SEUI, and CWA for comment on their support for the strike, but did not hear back at the time of publication.

According to a 2019 report from the Brookings Institution's Metropolitan Policy Program, Black people and Latino or Hispanic people are overrepresented among low-wage workers in the United States, with 54% of Black workers in America among those earning a median $10.22 an hour. Ash-Lee Woodard Henderson, an organizer with the Movement for Black Lives and the Co-Executive Director of the Highlander Research and Education Center, tells Elite Daily in a statement, “Corporate giants such as Walmart and McDonald’s profit off racial injustice and inequity. They claim to support Black lives, but their business model functions by exploiting Black labor — passing off pennies as ‘living wage.'" Henderson says, "Corporate power is a threat to racial justice, and the only way to usher in a new economy is by tackling those forces that aren’t fully committed to dismantling racism." In a statement to Elite Daily, McDonald's affirmed its support for the Black Lives Matter movement, but did not comment directly on the strike. Representatives of Walmart did not immediately return a request for comment.

Among strikers' demands are higher wages, better job opportunities, and workers' unions, along with safe and equal access to voting via mail-in ballots and in-person voting locations to elect officials who will implement the necessary changes for Black equality. Other demands include safe workspaces during the ongoing coronavirus pandemic and paid sick leave along with an expansion of health care coverage for uninsured or unemployed Black workers, as Black communities and individuals have been disproportionately affected by COVID-19. The Strike for Black Lives is also asking for a minimum wage of $15 per hour, fully-funded health care, and paid sick leave through workers' unions.

Jamila Allen, a 24-year-old member of the Fight for $15 and a Union, and an employee of Freddy’s Frozen Custard & Steakburgers in Durham, NC, tells Elite Daily, "Racial injustice has always been a problem and we can’t forget that it’s connected to the injustice we face on the job. We need equal justice for Black workers across our city and our country." Allen also brought up the disproportionate number of Black workers on the frontlines as essential workers during the coronavirus pandemic. "Our communities are getting the hardest hit by this virus, so we need proper PPE, hazard pay, paid sick leave, and more protections from our employers," said Allen.

Corporations the Strike for Black Lives is targeting include McDonald's, Amazon, Uber, and Lyft, among others. McDonald's did not comment directly on the strike but affirmed its support of the Black community. “With one of the most diverse workforces in the world, we believe Black lives matter, and it is our responsibility to continue to listen and learn and push for a more inclusive society by being open, honest, and candid,” McDonald's USA tells Elite Daily. Amazon, Uber, and Lyft did not respond to a request for comment by Elite Daily at the time of publication.

A 2020 report from the Congressional Joint Economic Committee (JEC) found Black workers made up 18% of minimum wage workers in the United States in 2018, despite being only 12.7% of the population. Minimum wage workers have far less job security than salaried workers, and the average unemployment rate in 2019 for Black workers versus white workers, both with high school degrees, was 8.5% and 3.9%, respectively. According to 2019 data from the U.S. Bureau of Labor Statistics, Black workers make up about 20% of the country's food preparation and service workers, including fast-food employees, as well as nearly 30% of taxi drivers and chauffeurs. In a research report Uber conducted in 2014, 18% of Uber drivers were Black. Amazon's workforce data report from 2019 also revealed Black workers made up 26% of its workhouse employees, but only about 8% of its management.

Even when Black Americans have a college degree and a job with more security, they continue to be victims of a huge wage gap. The Federal Reserve's 2017 Survey of Consumer Finances (SCF) found that white families with degrees earned a median net worth of $397,000, while Black families with degrees still had a median net worth below $100,000. The same JEC report also said the median annual household income for all Black households in 2018 was $41,692, more than $21,000 less than all other U.S. households and almost $29,000 less than white households, which earned a median income of $70,642. This means in 2018, Black households in America earned about 59 cents for every dollar earned by a white household.

The Strike for Black Lives aims to fight for fair pay, among other issues, on Monday, July 20, and you can support them in a few ways. The first actionable way to stand in solidarity is to take what the event organizers are calling the 8:46 pledge, which is for those who can't physically join a strike or group participating. To take the 8:46 pledge, you need to add your name to the list on the Strike for Black Lives website. Then, commit to doing one of these three options for 8 minutes and 46 seconds: kneel wherever you are at noon local time on Friday, June 20; spend the full time in an act of silence; or walk off of your job.

If you'd like to join a strike to show your support, you can find a Strike for Black Lives near you here or host your own by registering here. Another way to take action is to register to vote, so you can help make a political change.

Whichever way you decide to show support, mark your calendar for Monday, July 20 to join the fight against systemic racism in the U.S. capitalist system.

More like this
After Derek Chauvin's Conviction, Young Black Activists Demand True Justice
By Nylah Burton
Little Miss Flint's Activism Is All About Making Kids Like Her Feel Valued
By Ciarra Jones
Biden's Quote About Police Reform At The 2021 Address To Congress Went Way Beyond Policing
By Rhyma Castillo
Stay up to date