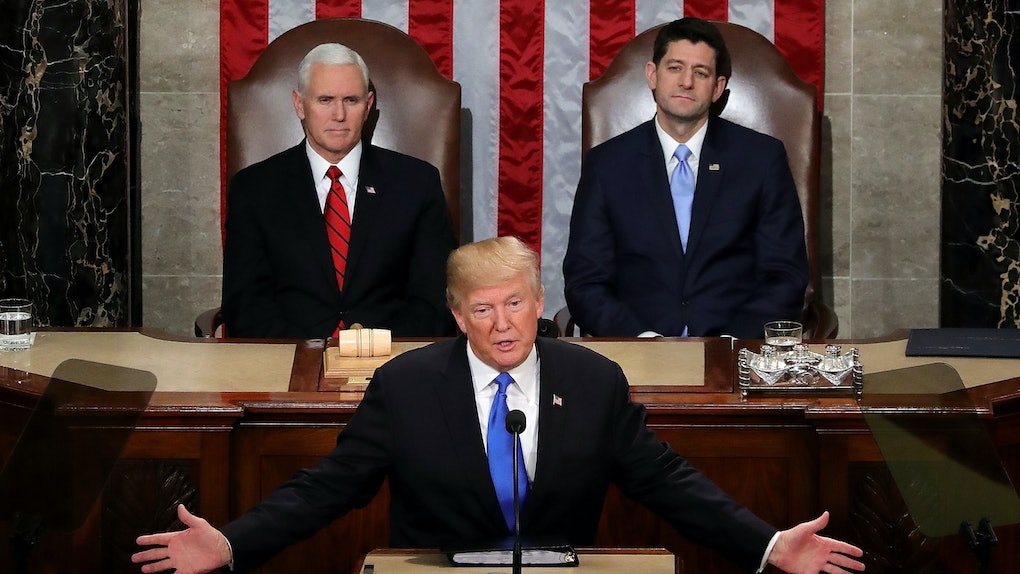 What Time Is The 2019 State Of The Union? Here's When To Tune In

The new year is here, and you know what that means? The 2019 State of the Union is right around the corner. This year's address will be particularly interesting to watch given that it comes in the wake of a partial government shutdown, and there's a Democratic majority in the House for the first time in years. I mean, you really won't want to miss it. So what time is the 2019 State of the Union, you ask? Get ready to set your timer.

The 2019 State of the Union starts at 9 p.m. ET sharp on Tuesday, Feb. 5, per Politico. Trump was invited to deliver the annual address by House Speaker Nancy Pelosi on Jan. 28, after the original event was rescheduled due to the government shutdown. But so far, it's unclear what he might discuss during the event.

We can make some guesses though. For one, it seems more than likely that Trump will discuss the wall he wants at the U.S.-Mexico border, which triggered the historic partial government shutdown after Democrats refused to meet his $5 billion request for wall funding. Over the weeks, he has repeatedly stressed the need for border security to fend off gangs, drugs and more, calling the issue at the border a "humanitarian crisis."

It's not that far-fetched to think that might come up, the way the 2018 State of the Union played out. Earlier that January, there had been a shutdown over a spending bill (yes, then too) and at that point the dispute was over the Deferred Action for Childhood Arrivals (DACA) program, an Obama-era effort that protects some 700,000 young immigrants who arrived in the United States as children from deportation. During his address, Trump called on both parties to put politics to the side and "get the job done," and promoted an immigration deal that would give youth covered under DACA protections in exchange for other major concessions, including — you guessed it — a border wall.

Aside from that, the 2018 State of the Union was really... something. Trump touted a robust economy, raving about low unemployment rates among African Americans and health care accomplishments. He also talked about the "disastrous" Affordable Care Act (ACA), his plans to decrease gang violence, immigration reform, and more. And the whole time, he would not stop clapping for himself.

Meanwhile, some people chose to boycott the address in protest of Trump and his many controversial comments and policies. Democratic Congressman Earl Blumenauer of Oregon said in a statement that he preferred to stay at home rather than listening to "another destructive, divisive speech by Trump." Rep. John Lewis (D-Georgia) decided not to attend in protest of Trump allegedly calling Haiti and African countries "sh*thole countries" in a closed-door meeting in the weeks before the address. (The president denied using the specific language.) Rep. Maxine Waters (D-California), a longtime critic of Trump, was another person who opted out of attending the event, telling MSNBC she didn't care to go listen to a "liar." Waters added, "I don’t appreciate him and I wouldn’t waste my time sitting in that house listening to what he has to say. He does not deserve my attention.”

No word on whether we'll see similar patterns this year, but considering Trump's knack for controversy, you can bet on seeing at least one wild moment or two. Remember to be in front of your TV at 9 p.m. ET on the dot.

More like this
The More Contagious B-117 COVID Variant Is Now The Most Common Strain In The U.S.
By Rhyma Castillo
These Tweets & Memes About Matt Gaetz's Venmo All Make The Same Joke
By Cianna Garrison
Here's How To Make Chipotle's Dragon Sauce With 2 Simple Ingredients
By Daffany Chan
Stay up to date