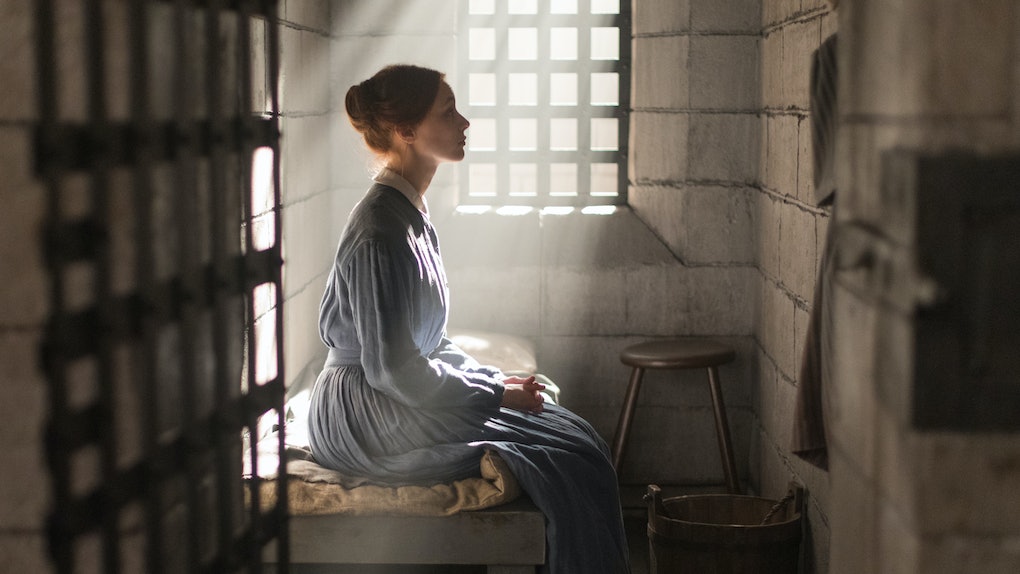 What Time Does 'Alias Grace' Hit Netflix? Here's Everything You Need To Know

Netflix's next major release turns their gaze from the 1980s midwest to a different historical time period. The six-part miniseries called Alias Grace is set in Canada in the 1840s. Directed by Mary Harron and starring Sarah Gadon, this collaboration with Canada's CBC Television is based on Margaret Atwood's 1996 novel of the same name. But when does Alias Grace arrive on Netflix? And does it in any way relate to the other major Atwood adaptation this year, Hulu's The Handmaid's Tale?

In a word, no. Though The Handmaid's Tale has a plot line that is set in Canada, and their newly announced casting for Season 2 suggests we'll be seeing more of the country north of Gilead. Alias Grace does not in any way relate back to that story. It is based on the real life conviction of Grace Marks (played by Sarah Gadon), an Irish immigrant and domestic servant who was accused, along with her lover, the stable hand James McDermott (played by Kerr Logan), of the double murder of her employer, Thomas Kinnear (Paul Gross), and his mistress/housekeeper, Nancy Montgomery (Anna Paquin).

Grace became one of the most enigmatic and notorious women of 1840s Canada for her supposed role in the sensational double murder, and was eventually exonerated after 30 years in jail. Her conviction was controversial, and sparked much debate about whether Grace was actually involved in the murder, or merely an unwitting accessory.

While the facts of the case are real, and Grace Marks was eventually pardoned (spoiler alert) in real life, the part of the series where Marks is interviewed and studied by a doctor named Simon Jordan (played by Edward Holcroft, of The Kingsman series) is entirely fictionalized.

The first two episodes of the series already debuted at the 2017 Toronto International Film Festival to good reviews. The CBC has been airing the episodes weekly since mid-September, with the finale airing the evening of Oct. 30. The episodes will drop in full on Netflix U.S. on Friday, Nov. 3, 2017 at 3:01 a.m. ET.

For fans of The Handmaid's Tale, Alias Grace is going to be right up your alley. Like Hulu, Netflix and the CBC have created a lavish production, with gorgeous historical period details. (Netflix made all six episodes available for preview.) The story is wildly different that the one in Gilead, which is all "speculative" and "dystopian fiction", while Alias Grace is set in actual history and based on people who actually existed.

But the themes are remarkably similar. In some cases, they remind us that while we here in America fear our country becoming a place like Gilead, it wasn't that long ago that our own culture created those same oppressive conditions for women of all statuses.

One of the major themes of Alias Grace, for instance, is "The Women Question," which was one of much debate beginning in the 1840s when Victoria came to the throne, and continues, in some fashion, through to this day. It encompassed such issues that would be familiar to us, including women's suffrage, our reproductive and medical rights, our bodily autonomy, our rights to own property, etc.

In the 1840s in Canada, women had none of those rights. Even a wife was merely property of her husband, and subject entirely to his whims. To wit:

...in Victorian times, every aspect of girls' and women's lives was dictated throughout their lives—which required constant supervision. Victorian women of every class or condition were to be controlled by men whether their fathers, husbands, masters or doctors. "They were sometimes institutionalized due to their opinions, their unruliness, and their inability to be controlled properly by a primarily male-dominated culture.

Sound familiar? This is basically the same set up that June faces in the world of Gilead, where even her mistress, Serena Joy Waterford, is completely powerless in the face of her husband, and the sexuality of all Handmaids is regulated, down to the mutilation of Alexis Bledel's character Emily (known as Ofglen, and later, Ofsteven.) The only difference is the time and place.

More like this
Is Netflix Making A 'To All The Boys' Spinoff Series About Kitty? Here's The Tea
By Rachel Varina
'The Crown' Season 5: Netflix Release Date, Cast, Plot, & More Details
By Ani Bundel
Netflix Renewed 'Bridgerton' For Seasons 3 & 4, Likely With More To Come
By Ani Bundel
Stay up to date