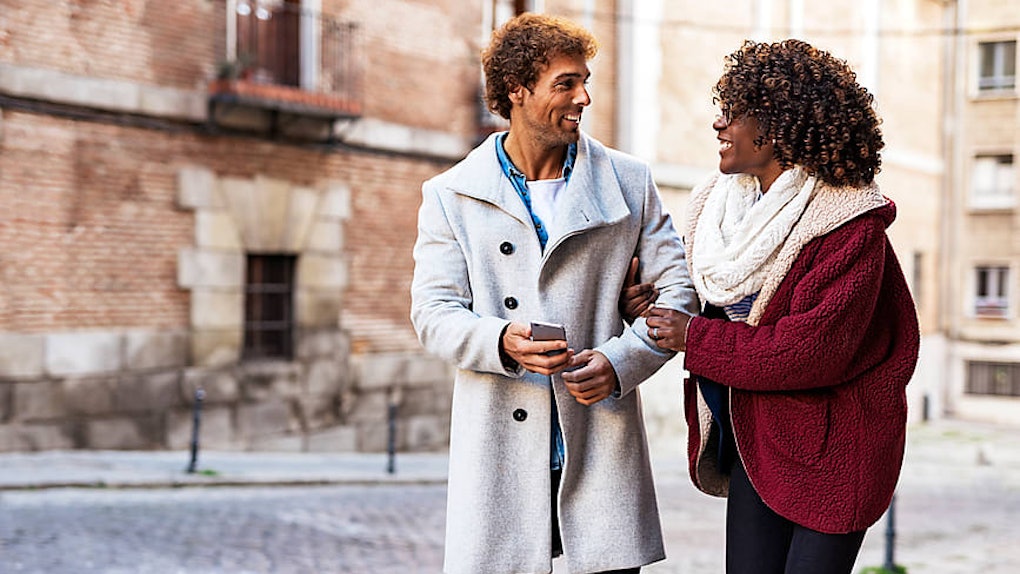 What The Spark Of Chemistry Really Feels Like, According To 12 Women

That initial spark of chemistry you feel on a date can be so exciting. The longer you talk and the more you get to know each other, that spark can make you feel like all you want to do is talk to them forever. It's amazing, but if you've never felt those initial butterflies, figuring out what the spark of chemistry really feels like isn't always easy. Thankfully, women take to Reddit to talk about these sparks all the time, and their explanations about what chemistry feels like hit the nail right on the head. Here, 12 women explain in adorable detail what that spark feels like, and it's so sweet.

But before we get to the goods, it's important to stress that just because you haven't felt the same spark these women are explaining, doesn't mean you haven't connected with someone on the same level. That spark can show itself in multiple different ways, varying per person and per relationship. It can also take time to develop! Just because you don't feel a spark right away, doesn't mean you won't eventually. You may have felt a different kind of spark with someone, and that is just as special. Like with many things in a relationship, there is no one specific way to feel that spark of chemistry with someone. Below, how 12 women describe their experiences.

Sometimes that spark doesn't always turn into something long-term.

He was the first person I had something of a real romantic relationship with. We met on tumblr and hit it off right away. We bonded pretty quickly over our similar interests, mainly our taste in music. It felt great, I would stay up until three in the morning talking with him and I spent all day thinking about what we would talk about next. I started crushing on him pretty quick. After a few weeks he left tumblr and I nearly cried. We reconnected about a week later and started something of a relationship. Didn't last long though.

Magnets have never seemed so beautiful.

When you hold a magnet up to most materials, it does nothing. If you try to stick it onto the surface, it doesn't hold on. It just falls.

When a magnet is next to just the right metal, it holds on even if you let go. It even gets involuntarily pulled toward the surface it's attracted to.

That's a metaphor for sexual/romantic chemistry. Some people just pull you in, and some just don't do anything for you and you don't desire to be all over them. Of course you can't truly know what it feels like through words though. You have to just feel it yourself.

The symptoms are very physical like feeling your heart beating, feeling your limbs and body heat up around them, feeling light in your head, feeling like you want to drink in them and the moments with them, into your eyes and senses. But it's also a lightness of being and a sort of drawing-in. It is magnetism, it's wanting to be closer, to touch and be touched for the safety and warmth and affection of it.

It feels magnetic, likes there's static or sparks in the air. You get goosebumps or a tingly warm feeling. You feel happier. Lighter. You want to hold hands with them. Kiss them. Touch them. It's good chemistry, when all those feelings are mutual. It's hard to describe in a way that doesn't sound cheesy or made up. It may start off as purely physical attraction, but good chemistry also happens when you talk to them.

That spark can take multiple forms.

For me it can take a few forms: I'll look him in the eye and feel drawn in, and also a need to look away at some point because there's some unknown energy building and I can't handle it. For me good "chemistry" means that even when conversation stalls or something breaks our momentum, we can pick it up again without awkward sh*t in between. We naturally feel comfortable with each other. A "spark" can also take the form of a sinking feeling, goosebumps, or butterflies in your stomach feeling when you look at them, get a call from them, they touch you, etc.

That spark is just being excited to be with them.

To me it was that feeling that when I was away from him hanging out with other people or guys, I could only think about how I missed him and wanted him to be the with me. It was the feeling I got from that first message of his I'd get in the morning, or that zing I'd feel when the doorbell rang. It feels like excitement, like anything could happen when you're with them and you want to find out what. I still get it when he comes home from being out, or we go on a date or something. I look at him and just being in that moment with him is enough.

It's wanting to always get closer to them.

That 'spark' can definitely be created over time. With most of the people I've developed crushes on during my life it wasn't an immediate attraction but something that came as I got to know them and got closer.

I've certainly felt immediate lust for a few men but it's rarer and much more shallow of a feeling that is easily forgotten if they are sh*t people. I also never experienced powerful lust like that until I was in my 20s and had been in a relationship for several years.

To describe what physical attraction feels like .. to me, it's wanting to be with a person, get closer, get to know them, get intimate with them. Rarely have I felt like I only want sex with a person. When I was first with my husband there was also a feeling of 'right' ness about it, like finding shoes that fit perfectly.

You have fun with the person and don't want to stop hanging out with them/talk with them. You have a lot in common or you bond over some of your opposites. They make you happy. If it's romantic — you also want to do it with them and always be touching.

For this woman, the spark really did seem electric.

I've had varying levels of chemistry with people of both genders over the years, but I feel like calling it electrical isn't very far off the mark at all. The last guy I really clicked with made me feel like I'd been struck by lightning just by catching his eyes. And when we would inadvertently brush fingertips or arms, I'd feel a zap like a short circuit. It got to be almost painful after a certain amount of time.

Truly great chemistry, you almost feel high around each other. The sex is incredible, almost primal. There's a spark that does not die. It may be an ember, but it is not extinguished.

I consider good chemistry to be when the relationship feels "effortless". Effortless is a word my boyfriend and I have described my current relationship many times. Not to say there is no work and we can just be lazy or taken for granted, it's just that the work we do put into the relationship is productive and invigorating, it doesn't take anything out of us emotionally.

It's like the most happy and comfortable you could possibly feel, but with a delicious unexplainable feeling of the forbidden. It's like being on stage giving the performance of your life — that feeling of being illuminated and beautiful and brilliant — but the other person is your audience, total self awareness and them-awareness, that cliche of "no one else in the room." It's like you can be in each other's space, circle and bat each other, touch, interact, stare and feel completely at ease, you can feel the heat like a physical thing, a flush, even if you've known each other for a few minutes. It's when you see them in your peripherals, can't forget they're there, even see them when they're not there, because your brain wants it so much. It's when you can't get the thought of being close up to them out of your mind. And it's when you're on a level, a wavelength, that you can't describe any better than "it is right that we are in each other's company."

If these definitions of chemistry have anything in common, it's that when you know, you know. It can feel physical, emotional, mental, or like everything combined, but when there's chemistry, it's hard not to notice, and impossible to ignore.