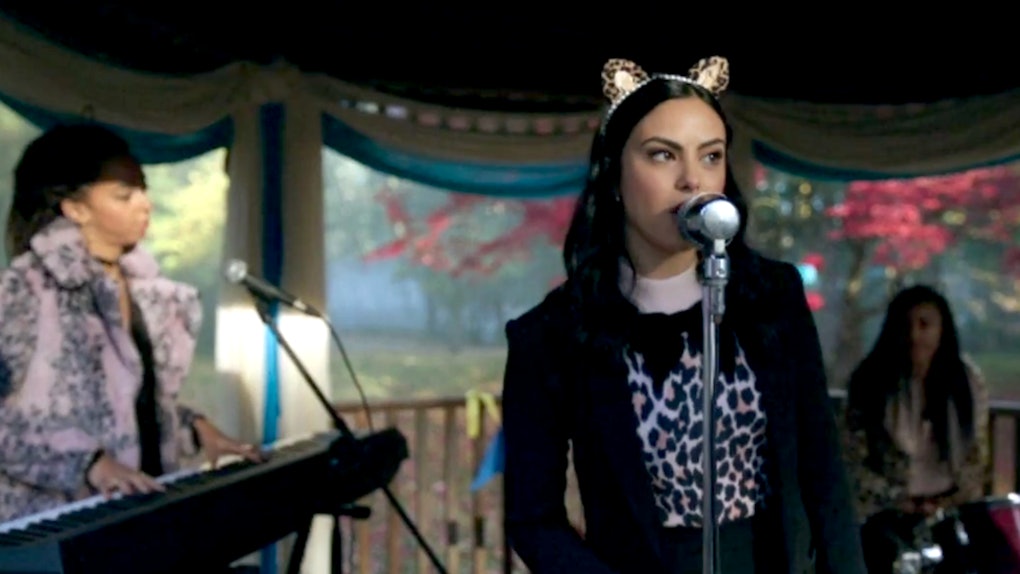 What Song Did Veronica And The Pussycats Sing On 'Riverdale'? It Had A Special Meaning

The Pussycats got a bit of a makeover on the newest episode of Riverdale. Yes, they still wear those kitschy cat ears, but they have passed the mic to a new lead singer: Josie is out and Veronica is in. And for her debut performance as the lead Pussycat, Veronica performed a song that she may not have known would be perfectly suited for the situation she was in. Let's talk about what song Veronica sang on Riverdale, and the special meaning it had to the episode.Spoiler alert: I'm going to be talking about some events in Season 2 Episode 11 of Riverdale, "The Wrestler," so don't read on if you haven't watched it yet.

The latest episode of Riverdale found the ever-growing tension between the Southside Serpents and the North Side reaching a new height. At this point, we already know that Hiram and Hermione Lodge are behind pretty much everything going on in the town — they've already bought out the drive-in theater, Southside High School, and somehow got Mayor McCoy and Sheriff Keller in their pocket. The Lodges are also the driving force behind planning a big celebration for Pickens Day, a town holiday celebrating their founder Augustus Pickens. But when Jughead Jones finds out that Pickens was actually responsible for the deaths of hundreds of the Native inhabitants of the land, and that the surviving Natives were the group that actually formed the Southside Serpents, he leads a charge against Pickens Day. It also doesn't help that the Lodges invited the Serpents to the celebration to work as security, rather than as guests.

It all leads up to yet another tense, spite-filled confrontation between the Southside Serpents and the North Side, this time at the Pickens Day celebration. And right before it all kicks off, we hear Veronica perform her song with the Pussycats: Duran Duran's 1983 single "Union of the Snake." I mean... the significance is pretty obvious in the song's title — as the Southside Serpents are coming together for a common cause for the first time in a while. Remember that Jughead has actually found himself a bit at odds with the rest of the Serpents recently, when he refused to listen to their pleas to stop causing trouble at Riverdale High by wearing his jacket. Veronica's song signifies that the Serpents are all working in unison once again, focused on shutting down Pickens Day.

Veronica's version of "Union of the Snake" is a lot smoother and more coffeehouse than Duran Duran's original new wave jam. You can check out the Duran Duran version of the song below, along with a very trippy music video:

Unfortunately, the union of the snake was no match for Hiram Lodge's silver tongue. Riverdale's resident bigwig talked down Toni Topaz's impassioned speech against Pickens Day and essentially dismantled the Serpents' protest, clearly enraging Jughead. If Jughead wasn't gunning for Hiram before, he certainly is now.

But the real drama involving Veronica's song in this episode is the fact that she usurped Josie's position as lead Pussycat. Veronica actually asked Josie to perform together with the Pussycats at first, but when Josie's mom walked in on the convo she coldly shut it down and made her feelings towards Veronica very clear. Obviously, Mayor McCoy is not a fan of the Lodges, even though she is forced to work with them after they bribed her. She tells Josie that Veronica is as manipulative as her parents are, and Josie turns on Veronica, refusing to perform at the Pickens Day festival.

This McCoy-Lodge rivalry is a pretty new development in the show, so it will definitely be interesting to see how it affects things in the future. Maybe Veronica and Josie will have a sing-off? I'd watch that.