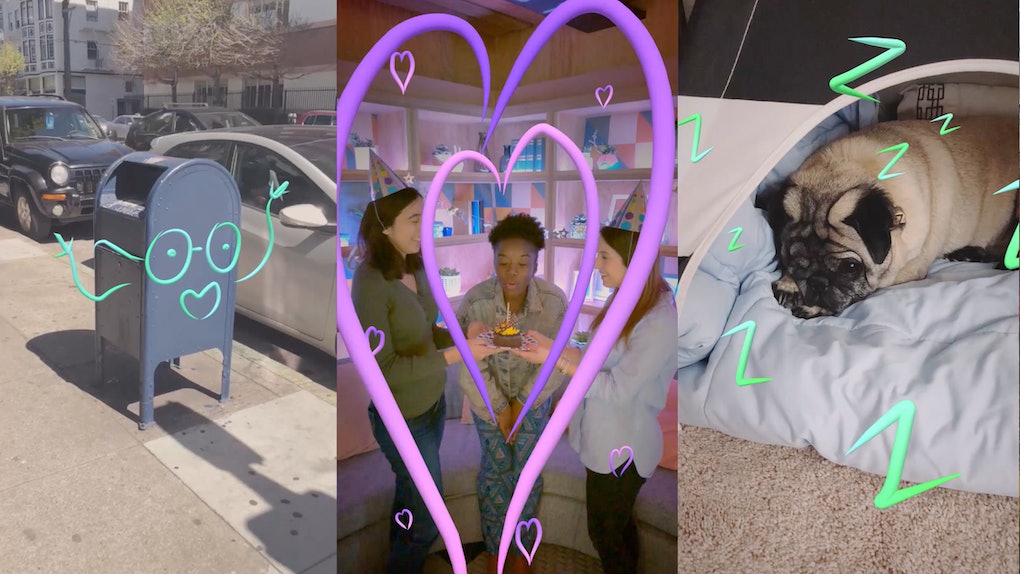 What Is The New Facebook Camera 3D Drawing Tool? It Will Make All Your Videos Pop

When it comes to sharing videos and photos with your friends, there seems to be an endless number of ways to punch them up with colorful filters and emojis. As of Monday, April 9, Facebook is introducing a new drawing tool that will give all your videos a little something extra. So, what is the new Facebook Camera 3D drawing tool?

According to an email from Facebook about the new feature, the Facebook Camera 3D drawing tool rolled out in an update for iOS and Android on Monday afternoon, and it allows you to use augmented reality to add 3D drawings to your videos (yes, please!). John Barnett, Product Manager for Facebook Camera, was quoted in the email explaining why Facebook created this new tool. Barnett shared, "We wanted to give people an easy way to create with augmented reality and draw in the world around them."

You can use the new 3D drawing tool before or while you take a video in the Facebook Camera. Keep in mind this advice about the new tool from Barnett as you use the new feature: "3D drawings work best on objects and the environment around you, so you can use the feature either before or while you are capturing a video." So if you want that real 3D feel, roll the video in Facebook Camera.

If your Facebook app is updated with the new 3D drawing tool, you can start adding the effects to your videos right away. Don't panic if you can't find the 3D tool in your app, though, because Facebook will "continue rolling it out globally over the coming weeks," according to Barnett.

Once you have the 3D drawing tool, it's super simple to use. After opening the Facebook Camera, you click on the "drawing tool" in the top right corner of your screen (pro tip: the drawing tool is the swirl-like icon at the top). Once you're using the 3D drawing tool, you can slowly move your camera to set tracking, and then you point the camera at the object of your video and draw away.

Since Facebook views drawing as a great way for people to express themselves, they will release more brush and tool options within the 3D drawing tool over the next few months.

In addition to the new Facebook Camera 3D drawing tool, Facebook is also looking at how they can expand their other features in the app. In an effort to help their users connect more in the ways that they like, Facebook is testing the option to allow its users to create and share Boomerangs on Facebook.

Facebook has been doing its best to regain the trust of its users since it was revealed allegedly 87 million Facebook users' data may have been improperly shared with Cambridge Analytica, an American data-analysis firm. Facebook suspended Cambridge Analytica from their platform on March 16, and Facebook has been sharing updates to their privacy policy. Mark Zuckerberg will be testifying in Congress on Wednesday.

It appears that in addition to policy changes, Facebook is also trying to retain their current users by updating features like Facebook Camera and Facebook Stories. I can't say that a new 3D drawing tool is the answer to Facebook's problems, but it is a fun, new feature that might make their users think twice before quitting the app altogether.