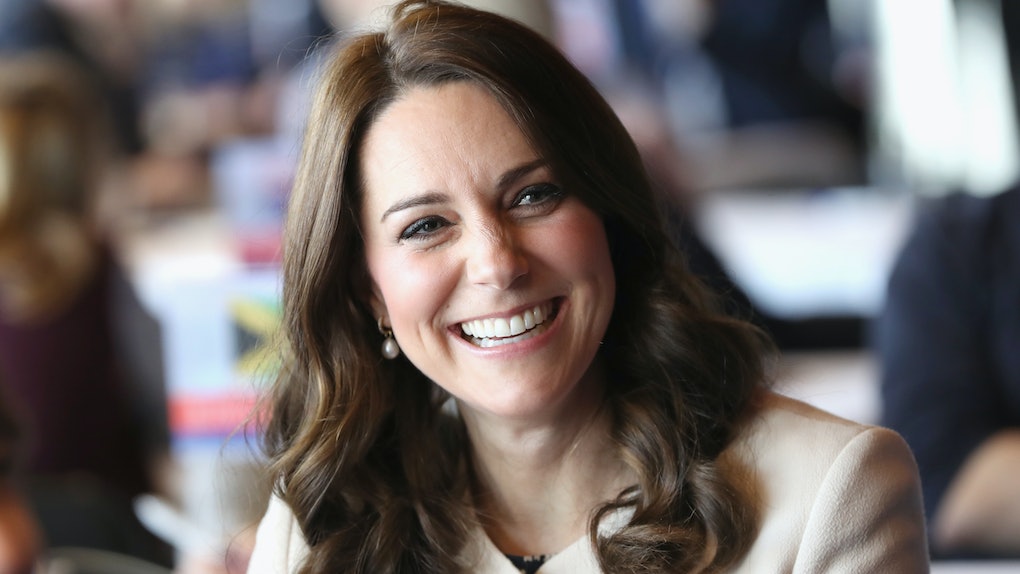 What Is Kate Middleton's Third Baby's Name? It’s A Regal One

Hear ye! Hear ye! A beautiful royal gift has been bestowed upon us! Kate Middleton and Prince William just welcomed their third child and Britain (plus Twitter!) is rejoicing like whoa. While fans were waiting desperately to find out if they were welcoming a new little prince or princess (spoiler alert: it's a boy!), they've also been dying to hear what Kate Middleton named her third baby. Can I get a drumroll please.... *drum sounds* Please welcome the one, the only, Louis Arthur Charles!

Kensington Palace announced the arrival of Kate Middleton and Prince William's third child on April 23 at 8 a.m. EST. He was born at 11:01 a.m. local time. In a tweet, Kensington Palace said, "Her Royal Highness The Duchess of Cambridge was safely delivered of a son at 1101hrs. The baby weighs 8lbs 7oz. The Duke of Cambridge was present for the birth. Her Royal Highness and her child are both doing well."

The Duke and Duchess of Cambridge are delighted to announce that they have named their son Louis Arthur Charles.The baby will be known as His Royal Highness Prince Louis of Cambridge.

When Louis' big brother Prince George was named, it was a nod to the Queen's famous father, King George VI. Managing editor of Majesty magazine told People, "George was a bit of a giveaway – it was bandied around so much and we expected it." As for Charlotte, her full name, Princess Charlotte Elizabeth Diana, includes nods to both Queen Elizabeth and William's late mother, Princess Diana.

While Alice and Arthur were at the top of the running for baby number three, fans were delighted to learn it was actually Louis.

Louis arrived just as scheduled, considering his due date was reportedly set around April 28th. The public learned Middleton was expecting at the same time they learned she was once again struggling with hyperemesis gravidarum. Middleton suffered the condition with her first two children, as well. Hyperemesis gravidarum symptoms include excess vomiting, nausea, or weight loss, but fortunately can be treated by a medical professional. Kensington Palace released a statement announcing Middleton's third pregnancy and her condition all in one. It said:

Now that Louis is here, the UK has so much to celebrate! With his Aunt Meghan and Uncle Harry's wedding right around the corner, Louis is the newest royal before Meghan Markle says her vows and becomes one herself. His arrival came just a few weeks before the famous nuptials, leaving fans in a full-on tizzy. Fortunately, Middleton and Markle leaned on each other during this particularly exciting time.

Before Louis' arrival and the wedding, a source told Entertainment Tonight,

Kate has been doing whatever she can to help Meghan adjust to life behind Palace walls... Kate has her hands full, but she’s been guiding Meghan on Palace protocol and supporting her... Meghan often pops around to visit with Kate and the kids dropping off treats. Meghan has also been leaning on Kate for advice as she joins the Royal family.

The insider added, "Meghan has also turned to Kate to keep her company as she has less flexibility roaming around freely since joining life as a future member of the Royal Family."

What a growing family you guys have over there!

Welcome to the big, big world Louis! You are SO loved! (And so famous.)