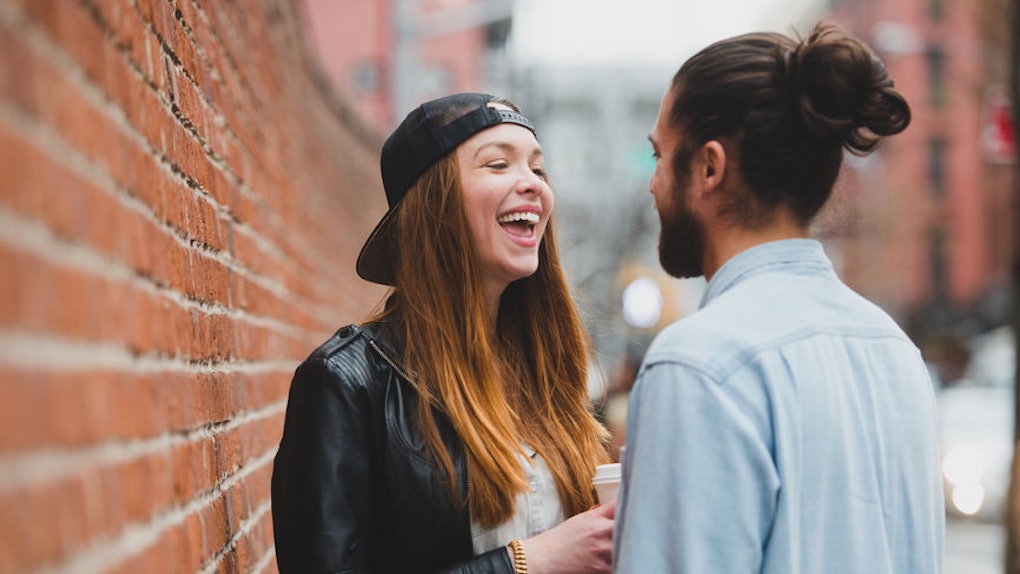 What Is Emotional Cheating? Here’s What 13 People Had To Say, Because It Can Get Blurry

Before I ever even asked myself, "What is emotional cheating?" I was a victim of it. I once had a partner who had an emotional affair. At the time, my partner was 21 years old, and I was still about six months from my 21st birthday, so they started going to a local bar without me. I trusted them, so I didn't sweat it until they started coming home later and later after the bar had closed. It turned out they had developed a friendship with the bartender, and they were staying and chatting for hours after the bar closed, and developed a close, intimate friendship that they lied about and tried to hide from me for months. (It eventually made its way back to me through mutual friends.) My partner always swore that nothing sexual happened, but I was still totally devastated. I felt betrayed and lonely and lost. I knew that a line had been crossed, I didn't have the language to describe what had happened, but I knew it was some kind of cheating.

My story is all too common, in part because what constitutes emotional cheating can be so unclear, and people cross that line without realizing it exists, only to face the consequences on the other side. So, what is the actual definition of emotional cheating?

"Any time you seek something out in someone else to fill a void in a relationship/marriage, it constitutes as an emotional affair," Amber Turner, the founder of Deluxe Matchmaking, told Elite Daily. And I speak from experience when I say it's every bit as painful (perhaps even more so) than a sexual affair. "Someone has stepped into emotional territory previously reserved for them, to which they used to have free and exclusive access," Wendy Lustbader, M.S.W., explains in a piece in Psychology Today. "Now there are sections of this sphere that belong to someone else, that are off-limits to them and have become private."

That still feels a bit vague, so I turned to Reddit to see what other people consider to be emotional cheating, and honestly, I agree. Here's what they had to say.

Lying About The “Friendship”

Anything you have to lie to your partner about re: level of closeness to another person. I don't expect to hear all the private details of discussions a partner has with others, but once hiding aspects of the relationship comes into play there's a problem.

If you feel the need to lie about an "innocent" friendship, you need to reevaluate that friendship.

If you have a conversation with someone that you wouldn’t 100% have in front of your SO, I would say it’s crossing into emotional cheating.

Making Someone Other Than Your Partner Your Priority

When your partner's priority is no longer you, it's someone else. This happened to me with my ex husband. He had this work colleague who was quite emotionally unstable and used to get drunk and cry a lot. I realised he was staying out later at work-drinks to "look after her"....it got to the point where he would be texting her rather than talk to me. I don't believe they cheated physically, but I realised I wasn't his priority anymore. She was. That to me is very much an emotional affair.

Ignoring your partner's feelings for the other person, my ex did this and I'm ashamed of how long it took me to realise, it's totally put me off relationships and now I can't open up to anyone about how I really feels any point which sucks because I liked that about myself before. All I seem to do is lie about how I feel now.

Emotional Intimacy Outside Of Your Relationship

Emotional Cheating is where you share an intimate conversation with someone who isn't your SO, and you know that your SO would be angry/hurt/disappointed/betrayed if they found out what had been said, so you conceal it from them/lie by omission. Doesn't necessarily have to be about sex. But seeking intimacy outside of your marriage, in a manner your SO doesn't approve of, and concealing it? That's emotional cheating.

When they share things with someone else that they'd never share with you. This could mean little things, but mainly I'm talking about huge things, like stuff that's been bugging them for a while or worries they have or questions about their happiness, that sort of thing. When it comes to topics on that scale, I believe you should be an open book to your partner, and visa versa, more than with anyone else, otherwise it's going down like the Titanic.

Sharing more of yourself with someone else than with your partner.

Hiding Your Relationship From Others

Of course there is. My long-term boyfriend had an internet relationship with some girl from gaming. she didn't even know he had a girlfriend. It was like I didn't exist. He constantly messaged her cutesy relationship things with "<3"s, calling her "babe", etc. That f***ed up our relationship really badly and we never really recovered.

He denied my existence in front of other women. Furthermore he often played video-games with (female) friends online. Every time they were able to hear my voice through his headset he answered in a weird way. He never referred to me as his girlfriend when explaining where this voice came from.

Testing The Waters With Other People

Dishonesty and allowing temptation to grow.

Yes, being shady online is cheating, too.

Some of these behaviors are pretty obviously crossing a line, while others may feel a bit more like a gray area — not to mention they can often create a slippery slope effect. As Lustbader explained, “Many who have found themselves in an emotional affair have told me they didn’t seek it out, but rather that 'it just happened.' In retrospect, they acknowledge that there were danger signs that they ignored along the way, especially as the contacts became sweeter and more furtive.”

She adds, "Increasing secrecy is certainly a red flag. Another is looking forward to the specialness of contact with this other person more than the daily-ness of being with your partner. It turns out that feeling understood on the level of the soul is far more sexy than sex itself.” And when you put it that way, what qualifies as an emotional affair suddenly isn’t so blurry anymore, is it?