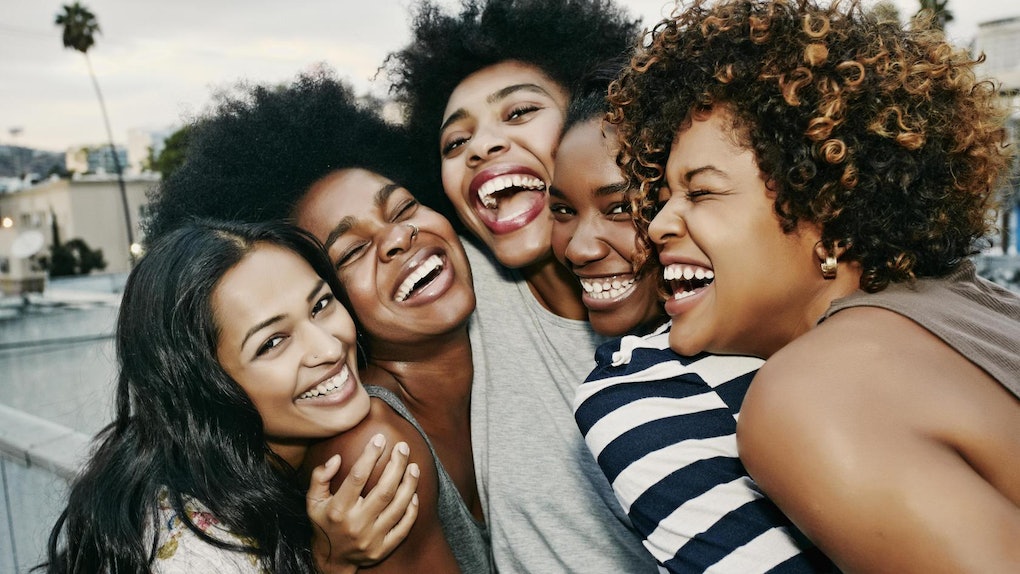 What Is Black Sisterhood, You Ask? Why It's The Unshakeable Bond That Keeps Us Going

We've all done it, gone in for an interview to an all-white office, insecure, shy and not knowing what to expect, thinking to ourselves, "Please, don't let me be the only black woman." And just as you've accepted the fact that you might have to be the ambassador for the black society if hired here, you are greeted by one of your own, your sista! So why is black sisterhood important? Well, whether it be a subtle head nod or slight smirk, this simple black sisterhood universal code instantly gives us a sense of relief, a sense of acceptance if you would. But where did all of this come from ? Why does this natural affinity even exist in black culture, you ask ? Our struggle.

Now, if you are confused at this point, I'm assuming you are not a black woman because every black woman, regardless of her background knows just what struggle I speak of. Let's face it: It's hard being black in America — society has proven that time and time again. But as a black woman, it's even harder.

The struggle of a black woman comes in many forms. Whether it's being constantly overlooked and questioned for your intelligence (much like our forever first lady so eloquently stated) or the daily struggle of not coming off as an "angry black woman" by simply having your own opinion, there's a lot we have to be on top of. Or what about having to answer countless unnecessary questions about black culture as if you have led the tribe for centuries?

Look, it's rough, but despite it not being the easiest job, I wouldn't trade a thing. It is that same understanding that allows the black sisterhood to be so close knit. We pretty much understand each other without having to express ourselves to anyone. We're all we got when you think about it.

You ever notice the pure excitement of a black woman when one of her sisters succeeds? It's simply beautiful.

To see the genuine joy and support from another woman who gets it means more than one can ever put into words. You feel safe, understood, and instantly uplifted. Your success suddenly isn’t even about you anymore, it’s now about the sisters before you who made it possible, and the sisters waiting to follow in your footsteps.

Think back to when Halle Berry won the Academy Award for Best Actress in 2002. Despite 80 percent of the speech being "this moment" followed by tears and other illegible words, Halle Berry took that time to acknowledge and celebrate her sisters who paved the way and stood beside her in this journey. Fast forward more than a decade later to when television royalty and Emmy winner Viola Davis did the exact same thing.

In 2016, Viola Davis stood on the Academy Award stage and made sure to inform the Caucasian thespians (which sounds better than white actors) about just what separated her from them: opportunity.

It’s no secret that black and white Americans are not afforded the same opportunities in various industries, with television being one of the most recognizable places. According to studies by The Center for the Study of Women in Television & Film as of 2016-2017, black women only hold 21 percent of black characters on television today — a “rise” from the previous year of only 17 percent.

Although this rise in mainstream black actresses is almost unnoticeable, we are taking steps in the right direction. In fact, this year’s Primetime Emmy nominations were labeled one of the most diverse ever, with people of color finally being recognized for their roles both on screen and behind the scenes.

When Lena Waithe made history and became the first black woman ever to win for comedy writing, we all won that night. Black women move off the belief that "she wins, I win."

An unapologetic black woman, Issa Rae, can definitely attest to that. The writer, producer, and actress was not the least bit shy about who she supported in this year's 69th Primetime Emmy Awards. When a Variety reporter asked who she was rooting for, Rae boldly answered, “I’m rooting for everybody black."

It's a sentiment that transcends the black community. Rae has personally witnessed the support of black women contributing to her now mainstream success, and now uses her platform to open new doors to women of color. But of course, not everyone understood Rae’s honesty and some even went so far as to call her racist.

Despite that ignorance, the black community understood just what Rae meant, and by no means were her comments meant to be racist. (Not that black people can even be racist, but I digress.)

What many fail to realize is, for so long, the black community didn’t succeed — or even considered. Therefore, we collectively understand each other's struggle. Every loss we took, every downfall, and every time we were overlooked, we collectively felt that. So every win we take will have the same effect. So like Issa, we’re also rooting for everybody black!

As the wise 21st century philosopher Onika Miraj, best known as Nicki Minaj, once said, "I loose, you loose Ma it's just logistics." And that's exactly what it is.

Black sisterhood is an unexplainable bond that includes love and respect for one another that we were forced to support early on. After all, if we didn't support each other, who would? This bond has been passed down throughout generations. Success after success, failure after failure, our sisters are there to cheer us on or wipe our tears. An unbreakable bond like no other.

So to my sisters... I understand your struggle, I congratulate your success, and I love you for all you are.

Flourish on, sis! I'm rooting for you.