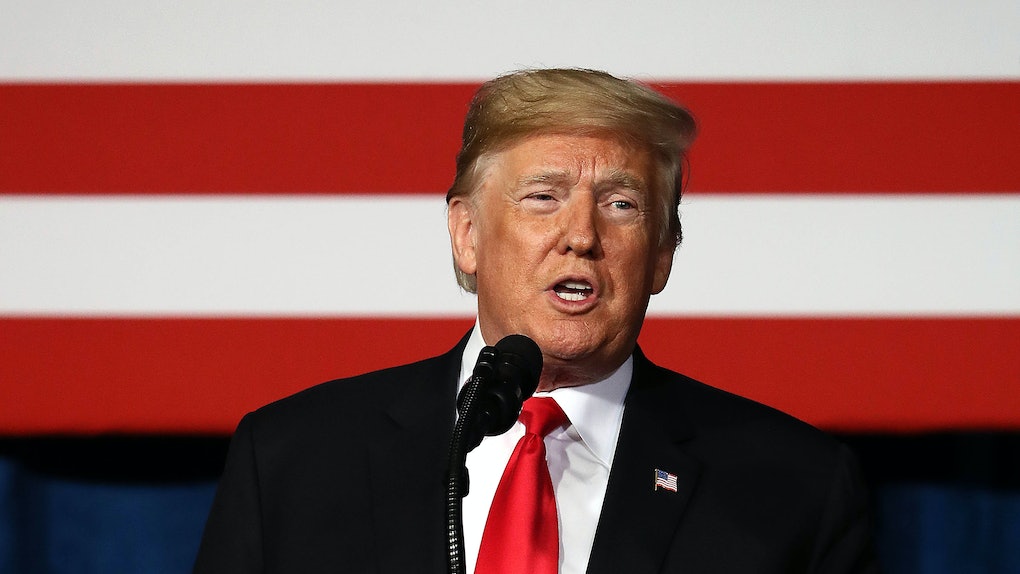 What Does The Manafort Sentencing Memo Mean For Trump? It's Tough

There's a lot going on in President Trump's world. He's been busy responding to his critics on Twitter, winding down from the G20 summit in Argentina, and perhaps trying to stomach all the legal drama many of his past associates have been ensnared in as of late. His former campaign chairman Paul Manafort is just one of many of those people whose name has been all over the news lately, largely because a sentencing memo for his alleged crimes was just released on Friday, Dec. 7. The memo glosses over a bunch of alleged lies Manafort told prosecutors in the Office of the Special Counsel (OSC), one of which involves the President himself. With his name in the mix, you may be wondering: what does the Manafort sentencing memo mean for Trump? And to that, I say... it's complicated.

The OSC's Dec. 7 filing details five instances where Manafort allegedly lied to prosecutors, from his business affairs to his communications with his former business partner Konstantin Kilimnik, who allegedly has ties to Russian officials. The latter adds to potential evidence FBI Special Counsel Robert Mueller — who is investigating potential collusion between Russia and members of the 2016 Trump campaign — might have regarding contacts people close to Trump and Russian officials had during the election. Of course, if Mueller is able to prove any wrongdoing by Trump as it relates to the matter, it might not be pretty. Elite Daily reached out to Manafort's trial lawyer for comment on the allegations that Manafort lied to the Office of the Special Counsel about his former business partner, but did not hear back.

The filing also details Manafort's alleged lies about his communications with the Trump administration. After signing a plea deal with Mueller in August 2018 (which has since fallen through), Manafort reportedly said he had "no direct or indirect communications with anyone" in the Trump administration. The document, however, suggests otherwise. Per the filing,

Elite Daily reached out to Manafort's trial lawyer for comment on the allegations that Manafort lied to the Office of the Special Counsel about his Trump administration contacts, but did not hear back. Per CNN, White House press secretary Sarah Sanders said in statement on Dec. 7, "The government's filing in Mr. Manafort's case says absolutely nothing about the President." Elite Daily reached out to the White House for further comment regarding the allegations, but did not hear back at the time of publication.

It's unclear exactly what was discussed (and with which member or members of the Trump administration he allegedly spoke) or if there were any conversations after May 2018, but the update appears to give light to a Nov. 27 report from The New York Times, which said that his lawyer had been filling in President Trump's lawyers on what he'd told investigators in the Russia probe. While that's not illegal, the Times noted that it was "highly unusual." Elite Daily reached out to representatives of Manafort and the White House for comment on the report at the time, but did not hear back.

Although it's all probably worthy of an eyebrow raise or two, at the least, White House Press Secretary Sarah Sanders is maintaining that the filing has nothing to do with the President. In a statement shared with CNN on Dec. 7, she said,

The government's filing in Mr. Manafort's case says absolutely nothing about the President. It says even less about collusion and is devoted almost entirely to lobbying-related issues. Once again the media is trying to create a story where there isn't one.

Elite Daily reached out to the White House for further comment regarding the allegations, but did not hear back at the time of publication.

It seems as though the White House believes that Trump has nothing to worry about with regard to the OSC's memo about Manafort. With plenty of alleged lies brought up in the memo by Mueller's team, though, you should probably keep your eyes peeled for what's next.