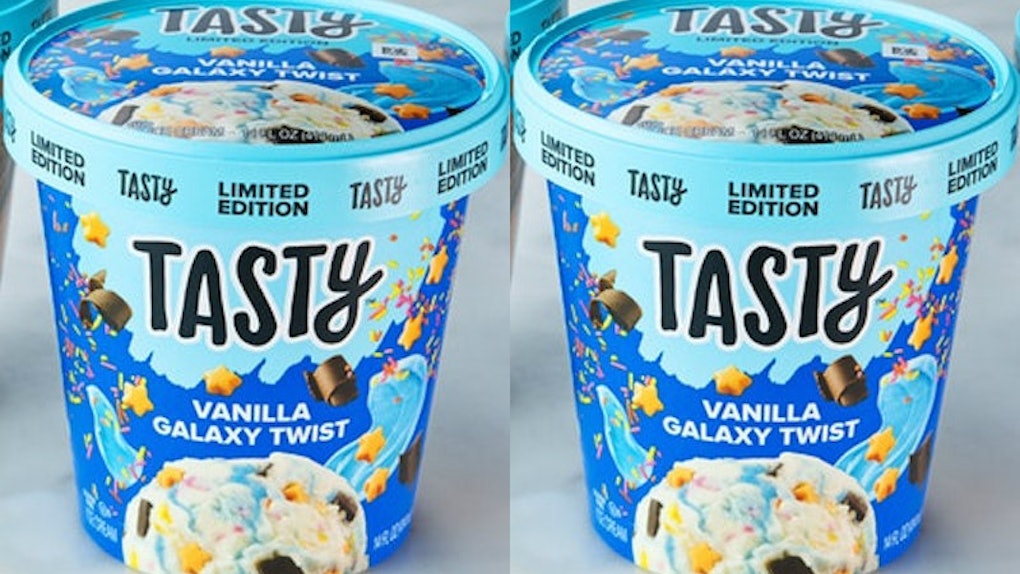 What Does Tasty's Vanilla Galaxy Twist Taste Like? This Ice Cream Is Next-Level

If you're one of the millions of people who follow Buzzfeed's Tasty on social media for meal inspiration, easy-to-follow recipes, and overall delicious-looking food, you might have already heard that the food network recently released a line of delicious ice cream flavors. Among the four new flavors, one really stands out — the Vanilla Galaxy Twist. With a name like that, you might be wondering: What does Tasty's Vanilla Galaxy Twist taste like? The ice cream might have "vanilla" in the name, but the flavor is so much more.

Vanilla Galaxy Twist is part of Tasty's four new limited-edition ice cream flavors that also include Peanut Butter S'mores Smash, Chocolate Caramel Pretzel Crunch, and White Chocolate Raspberry Lava Cake. Like the name suggests, the the Vanilla Galaxy Twist starts with a sweet vanilla base and is instantly upgraded with silky, blue frosting swirls. Not stopping there, it also has rainbow sprinkles and caramel-flavored stars. Talk about a flavor that is out of this world.

Before I get to exactly when you can expect from these flavors, I'll let you know that Vanilla Galaxy Twist and the three other Tasty flavors, which are made with Nestlé Dreyer’s Ice Cream, are available across the United States as of February 2019 until supplies last. The flavors are sold in 14-ounce containers for around $4.99, per Tasty.

Elite Daily's Tina Kolokathis, Deputy Editor of News & Entertainment, got a taste of the amped up flavor, and she shared that it still has a "classic vanilla ice cream flavor but it's brought to the next level of sugary sweetness with the swirls of blue cake frosting inside." To really elevate this dessert, Kolokathis says, "The caramel stars and sprinkles make it extra tasty and add in some texture!"

Talia Halperin, General Manager of Tasty Commerce, talked about the company's decision to release a limited-edition ice cream line. In a press release, she said:

Our exclusively limited-edition ice cream gives us the chance to do what we do best — continue innovating in the kitchen and sharing our tastiest creations with consumers.

She also noted, “Tasty is all about driving human connection around food, and what’s more social than ice cream?”

The Vanilla Galaxy Twist may is one I most have my eye on out of these flavors, but the other flavors are close runners-up. The White Chocolate Raspberry Lava Cake is made with white chocolate ice cream, raspberry swirls, and chunks of cake for a sweet and tart birthday cake alternative. Chocolate Caramel Pretzel Crunch is geared toward the lover of savory foods, with a chocolate ice cream that contains bits of pretzel and salted caramel swirl. Finally, Peanut Butter S'mores Smash is made with peanut butter-marshmallow ice cream, and it's filled with peanut butter cup and graham cracker chunks, mini marshmallows, and fudge swirl. Whatever your favorite kind of ice cream, you really can't go wrong with any of Tasty's four new flavors.

According to the FAQ on the Tasty website, fans can look forward to new flavors hitting the shelves later this year for more ice cream goodness. The FAQ also mentions that the current flavors will be around for three to four months before the next flavors sweep in, just in time for summer! In the meantime, be sure to keep an eye on the current flavors in Meijer, Albertson's/Safeway, HEB, Dollar General, and Hy-Vee stores around the country. Happy snacking!