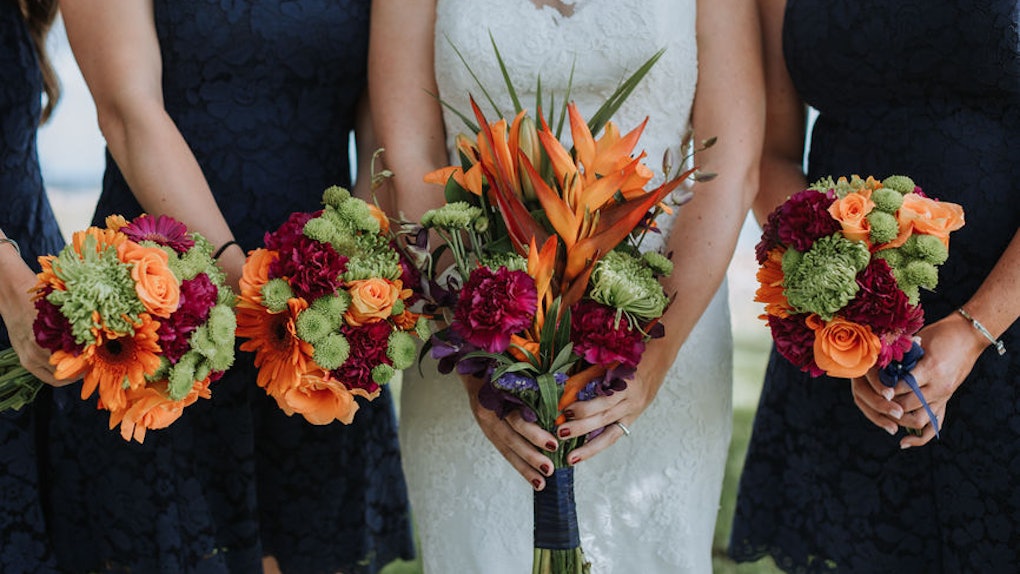 What Does It Mean If I Don't Dream About A Wedding? An Expert Explains

I’ve reached a time in my life when it seems as though all my friends are either married or planning a wedding, and it's been fascinating to see which route each of them took with the ceremony and their reception. Some went all-out with huge, traditional ceremonies, while others opted for more intimate and smaller affairs. However, what they all had in common what that they seemed to know what they wanted right away — and not one confessed “I don't dream about a wedding,” because they had been picturing it in their mind for years.

But what if you haven't? What if you don't have the slightest idea of what kind of wedding you want because it's never really been something you thought about — or even that you want, like, at all? Is that weird? Aren't you supposed to dream about your wedding? Don't panic, because Anita Chlipala, licensed marriage and family therapist and author of First Comes Us: The Busy Couple's Guide to Lasting Love, tells Elite Daily you’re not alone. “It is common to not dream of a wedding,” says Chlipala, and that's likely because you may have different priorities, she explains. The fact is, weddings aren't for everyone, and that's totally OK. But if you're not sure why you've never fantasized about your wedding day, here's what Chlipala says that could mean.

1. You’re uncomfortable with all the attention.

For some folks, their wedding is “their day.” They get to be the centers of attention, and it's all about them. If that's something you enjoy, then of course the idea of a wedding with all its pomp, circumstance, and public speaking is something you dream of. However, if you tend to be less comfortable with attention, Chlipala says it's likely your wedding day isn’t something you dream of. “You don't like [or] want to be the center of attention. You prefer a low-key wedding and prefer the day to be over as quickly as possible, and so, [you] don't spend time thinking of what that would look like,” she explains.

2. A wedding seems too inconvenient.

Putting on a wedding can be a really big production, and for some people, Chlipala says, it's just not that feasible. Like, for instance, if you friends and family are far away. “You're considerate of the time commitment and travel costs for them and don't expect a big wedding,” she says. This can make it less enjoyable to fantasize about a wedding, so instead you’d rather focus your mental energy on other things.

3. You have different financial priorities.

Getting hitched, especially with a big wedding and reception, isn’t cheap. That cost, Chlipala says, may make the idea of a wedding not very appealing for some. "[If] you'd rather spend the money on other goals, like travel, buying a home, or retirement,” says Chlipala, you’re probably spending your time imagining those scenarios instead.

4. You’re more interested in the marriage than the wedding.

It's also possible, Chlipala says, that it's just as simple as not really caring that much about the wedding itself. “The wedding is one day of a marriage that they hope lasts a lifetime,” she explains. Not only is this attitude common for people who don't really give their weddings much thought, but it can actually be a healthy one. “I would prefer women — and their SO — spend more time thinking about their marriage than their wedding,” Chlipala concludes.

While there is certainly nothing wrong with already having every detail of your future wedding mapped out in your dreams, the takeaway here is that the opposite is true too. If you don't care, want, or think about your future nuptials, that is totally fine — and, as it turns out, not as uncommon as you may think. Just do you, and save sweating the wedding stuff for when, and if, you ever need to.

More like this
Zac Clark & Tayshia Adams Are Wedding Planning & I’m So Pumped
By Lydia Wang
When Are Ariana Grande & Dalton Gomez Getting Married? Here's The Reported Tea
By Corinne Sullivan
Elizabeth Olsen & Robbie Arnett's Astrological Compatibility Is A Dream
By Rachel Shatto
Stay up to date