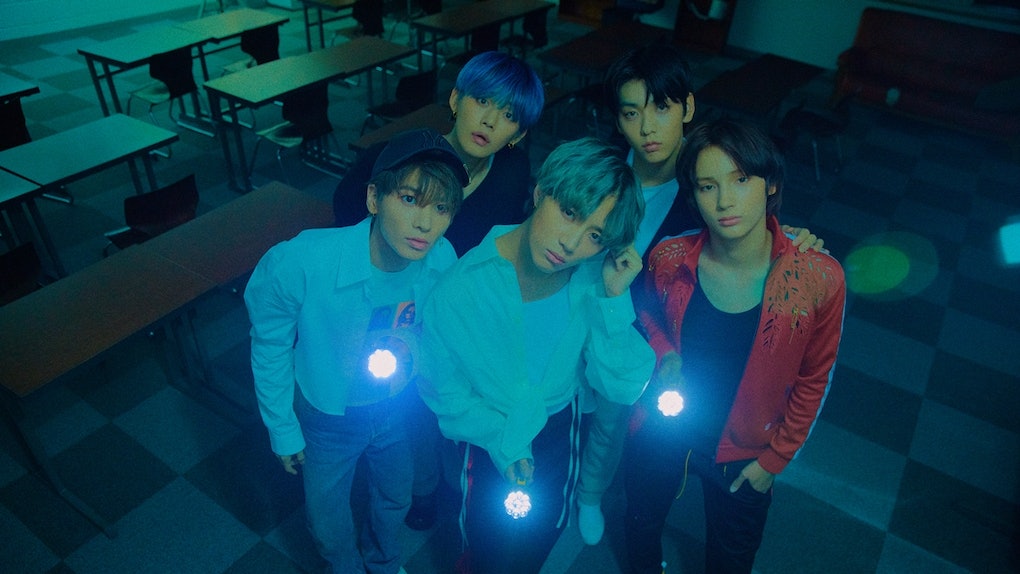 What Do TXT's "Can't We Just Leave The Monster Alive" Lyrics Mean In English? They're Heavy

When I saw TXT perform at KCON NY on July 6, I was so blown away. It seemed that everyone there knew the words to TXT's songs, which surprised me since the group just debuted on March 4. With how big TXT is, you would think these guys have been doing their thing for years. TXT fans must be thrilled right now because the group has a new album out. The Dream Chapter: MAGIC is the perfect follow-up to the group's debut EP, The Dream Chapter: STAR. It has eight songs and each are amazing in their own way. One song that fans can't get enough of is "Can’t We Just Leave The Monster Alive?" Fans keep asking the same question: What do TXT's "Can’t We Just Leave The Monster Alive" lyrics mean in English? You can't fully appreciate how awesome of a song this track is without knowing the translation, y'all!

Ever since Big Hit Entertainment revealed TXT's The Dream Chapter: MAGIC tracklist on Oct. 10, fans have been really curious about the song's meaning. I mean, it literally has "monster" in the title, what could be more interesting than that? What "monster" was TXT talking about? Was this a tease at their upcoming music video? Was "monster" just a symbol to represent something else? Fans had these questions and so many more.

The song is now out and "Can't We Just Leave The Monster Alive?" is actually one of the more upbeat tracks on The Dream Chapter: MAGIC. But don't let the song's cheery tone fool you. The song is heavy AF. On the surface, the song sounds like it's just about playing a video game, but it could actually be about escapism and not wanting to grow up. In a video game, you can be anyone you want to be and you can never really be harmed or age. There are no limits and you can even get re-dos. In real life, that's not the case, and that's why this song hits so hard.

You can listen to "Can't We Just Leave The Monster Alive?" below.

According to a fan translation by @translatingTXT on Twitter, TXT's "Can't We Just Leave The Monster Alive?" lyrics translates to the following lyrics in English:

The tangles bush, the maze of darkness

Past that I encountered a forest

This moment that kept on repeating

The ending that appeared before my eyes

Oh stop right there for a moment

The ending that is given

Can be pushed back, I want to go back

Now, the final boss, push your feeling of terror back

I want to enjoy this world a bit more, this moment

Alright, in this time and space

If I could stay here forever

I would take a trip through this dungeon

Now throw away all these weapons and to a festival

Throw away all weapons

Even if I give up the stats

You can be the hero

And I'll be the monster now

Away from our boring roles and become each other

I won't hurt you

You can reset it

Do you want to hide in this game?

Alright, in this time and space

If I could stay here forever

I would take a trip through this dungeon

This place we ran away to

Do I have to break this stage, become an adult

In order to do well

I want to live as a boy forever

And the tangled bushes are twisted

Oh I even like the monster in the forest

Our chosen paths are boring

This place we ran away to, forever just stay

It's a fatal error

But it's peaceful (Alright)

Stop this time for a bit

Oh I want to stay (Alright)