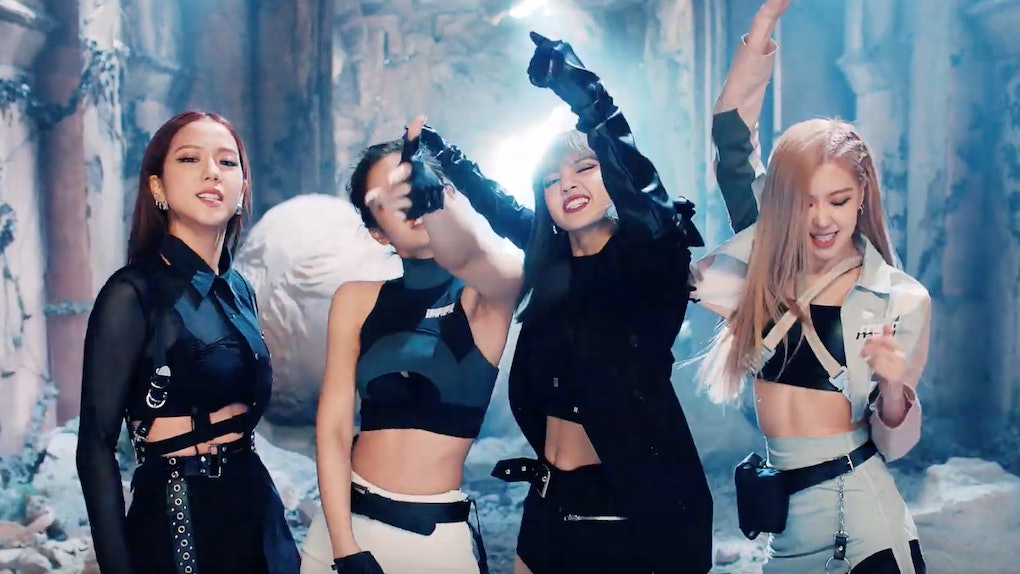 What Do BLACKPINK's "Kill This Love" Lyrics Mean? It's Going To Be Your New Breakup Anthem

Well, well, well. If it isn't a new BLACKPINK song to get me going at the gym. The girl K-pop group just dropped a new EP called Kill This Love and it's fire, obviously. When it comes to K-pop, many U.S. based fans know they love the music but often don't speak their idol's native language. For this reason, plenty of Blinks are rushing to their computer and typing in the question: What do BLACKPINK's "Kill This Love" lyrics mean? It's a bomb breakup anthem for sure.

The music video dropped on Friday, April 5, after the release of four teaser videos featuring each girl in harsh lighting in front of red walls. Based on this, fans were anticipating a sexy, fierce romp and boy did BLACKPINK deliver. Members Lisa, Jennie, Jisoo, and Rosé smash their way through this banger in leather outfits and military-inspired dance moves.

Once you know what the lyrics mean, it makes the entire experience even more fierce.

Here are just some of the badass words, according to a translation on Genius:

[Verse 2] Here I come kick in the door / Give me the strongest one / So obvious, that love / Give me more give me some more / Cling onto the edge of the cliff if you want / With just one word you’re like starstruck again / That warm nervous feeling, extreme excitement / Felt like heaven but you might not get it in

[Pre-Chorus] Look at me Look at you who will be in more pain? / You smart like who? You are / If you cry tears of blood from both eyes / So sorry like who? You are / What should I do, I can’t stand myself being so weak / While I force myself to cover my eyes / I need to bring an end to this love

Not for nothing, BLACKPINK's followers do know that Jennie just broke up with EXO's Kai... coincidence? Hmm...

Despite what is going on with the member's personal lives, BLACKPINK is quickly making their way into the U.S. mainstream and history as the first female K-pop group to perform at Coachella. Just one week after the arrival of "Kill This Love," the girls will step on stage in Indio, California at the historical music festival. On January 3, the girls shared the Coachella lineup on their official Instagram account with the caption: "@coachella 2019 🌴 see you there🖤💖"

According to the Hollywood Reporter, BLACKPINK is busy soaring in Asia and also holds the record as the highest-charting female K-pop act on the Billboard Hot 100. They peaked at No. 55 with their former hit "Ddu-Du Ddu-Du," and came in at No. 40 on the Billboard 200 albums chart thanks to their EP, Square Up. Now that "Kill This Love" is here, their fans will be anxious to see how it impacts their ranking and reach.

Congratulations on all the success, ladies! More like "GROW This Love," ya feel me?

More like this
Rosé From BLACKPINK's "Gone" Music Video Is The Ultimate Sad-Girl Aesthetic
By Abby Monteil
Demi Lovato & Ariana Grande's "Met Him Last Night" Lyrics Focus On Toxic Love
By Brandy Robidoux
What Do BTS' "Film Out" Lyrics Mean In English? They're About A Past Relationship
By Michele Mendez
Stay up to date