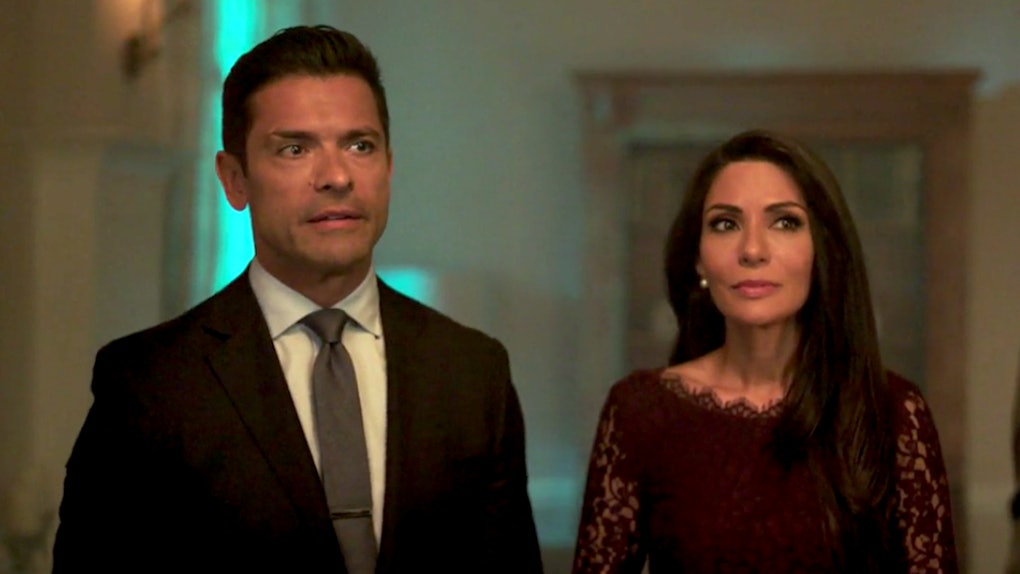 What Did Hiram Lodge Do On 'Riverdale'? The FBI Is On His Case

OK, y'all, I can't be the only one wondering what the hell the Lodges are planning on Riverdale. After Wednesday night's midseason premiere, I'm more confused than ever about that mysterious plan Hiram Lodge has been cooking up since the start of the season. Now that the Black Hood stuff is out of the way (at least for now), the new big mystery that has everyone puzzled is what the Lodge family is doing on Riverdale. The new episode gave fans even more insight into Hiram and Hermione's schemes, but the end game is still keeping us guessing.

Riverdale viewers have picked up on some of the Lodges' shady dealings throughout the first half of Season 2, but it became more apparent than ever in Wednesday night's midseason premiere. Hiram and Hermoine Lodge bribe Mayor McCoy into closing down Southside High after her drug raid — she makes up a lie about meth labs in the basement to justify the shutdown. Why do the Lodges want Southside High closed? Well, apparently they are interested in buying out the land that it's on.

Hmmm, interesting; that certainly follows the actions that we've seen Hiram Lodge engage in since he has shown up in town after his stint in prison. Since he has been in Riverdale, we've already seen him mastermind the purchase of the old drive-in theater lot and buy out Pop's Diner. Hiram's plan definitely seems to be all about buying as much property in Riverdale as possible... maybe even buying out the whole town? The end goal of his excessive land-buying is still unclear, but since he is referring to it as his SoDale Project (a combination of Southside and Riverdale), it sounds like it has something to do with merging the warring neighborhoods.

The other surprising revelation about the plan from the new episode is that Veronica doesn't only know about it, she's helping her parents carry it out. At the beginning of the episode, Hiram and Hermione warn Veronica that she is going to be at the center of the turmoil over their plan to shut down Southside High since the Southside students would be entering Riverdale High, and Veronica responded by assuring them she would keep the peace between the rival students. And despite some blowback from Cheryl and Reggie, Veronica does work to keep everyone happy with the new high school situation, and appears to be much closer with her parents now that they have shared their plans with her.

So, is Veronica actually on the dark side now, or is her parents' plan for the town not necessarily and evil one? There's also the possibility that Hiram and Hermione only shared part of their overall plan with their daughter, making her think it is a good thing while hiding the ulterior motives. But still, it sure seems like the fact that Veronica is working with her parents and keeping it a secret from her friends is going to cause a lot of drama when the truth about the SoDale Project eventually comes out.

And of course, we can't forget about the new FBI presence in Riverdale. A special agent has gotten Archie to help the authorities get more information about Hiram Lodge and the SoDale Project in an effort to take them down, and after some initial hesitation, Archie is all in. It looks like we are going to be finding out everything we have been wondering about the Lodge family and their secret scheme soon enough, thanks to secret agent Archie Andrews.

More like this
In 'Riverdale' Season 5, Toni Topaz Is The Black Superwoman Without A Cape
By Erika Hardison
Who Did Emily Poison? 'The Handmaid's Tale' Season 2 Is Off To An Intense Start
By Ani Bundel
These Fake 'Riverdale' Brand Names Are Even Better Than The Real Thing
By Rachel Varina
Stay up to date