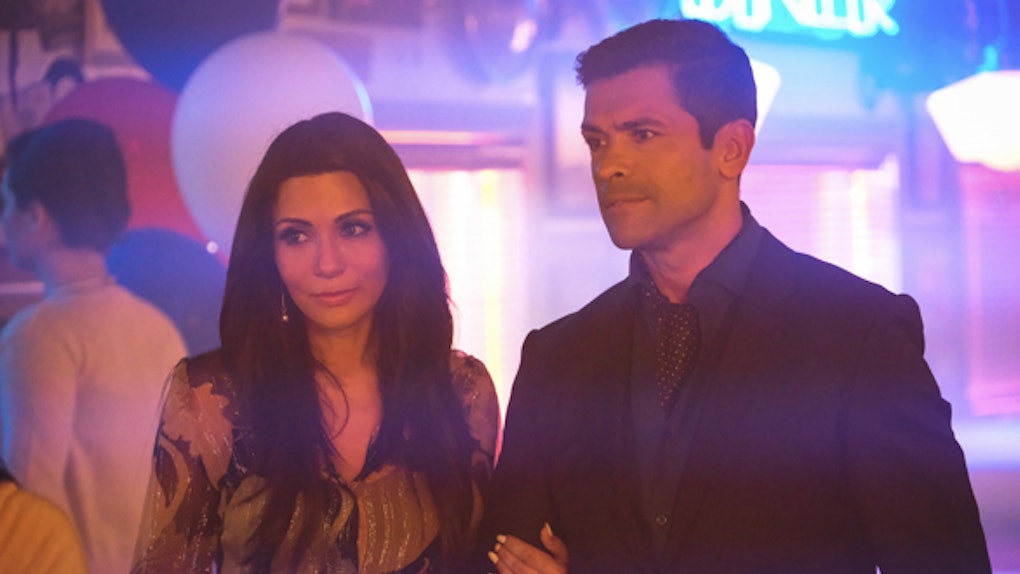 Hermione & Hiram Lodge's Relationship On 'Riverdale' Is Complicated, But Marisol Nichols Perfectly Sums It Up

Any fan of Riverdale knows the relationships on the show are nothing if not complicated. Now that Veronica's father, Hiram, is out of prison and back in the picture, Hermione and Hiram's relationship on Riverdale is no exception to this rule. Between Hermione's "briefest of flings" with Fred Andrews and Hiram's shady business dealings, it's hard to see why these two stay with each other — there's clearly something more to their story; luckily, Marisol Nichols, the actress who plays Hermione, recently spoke with Insider about her background theory on Hermione and Hiram's relationship and why her character chooses to stay with the shady businessman despite her obvious love for Archie's dad.

You'll remember Season 1 of Riverdale begins with Veronica and Hermione returning to Riverdale after having lived the lavish life in New York for quite some time. Their move wasn't by choice, though; instead, they were forced to relocate after their millionaire father/husband was arrested for embezzlement and fraud. We never actually meet Hiram in Season 1, but we hear often of his money, power, and influence — even from behind bars.

Season 2 is a different story, though; Hiram is out of prison, acting like nothing has ever happened, and, unsurprisingly, he's a suspect in Fred Andrews' shooting. Of course, the question many of us have now is: Why is Hermione still with him?

There are the obvious explanations: business dealings, financial dependency, wanting to keep her family together, but Marisol Nichols recently explained to Insider her own theory on why she sticks around, saying,

I had this wonderful idea that [Hermione] had the choice between Fred [Andrews] and Hiram, and she made the wrong choice. Fred was the love of her life, but Hiram was intoxicating. So maybe it's that? Who knows what the writers have planned, but I like it.

For a while Hermione and Veronica were on their own. It seemed like Hermione could flex her independence for once, but now that Hiram is out of prison, she's got to get back into the old swing of things with her husband. The actress continued by saying,

It's complicated. I would say that at one point, they loved each other. I think that they admire each other's strengths. I think that they're a f—ing great team. At the same time, when Hiram went away, it was sort of a wake up call for Hermione and she started to look at things differently. Then, unfortunately, he came back, and so she has to go back into the dynamic that they are used to, and we'll see how long that lasts.

In the most recent episode of Riverdale, Hiram threatens Hermione if she tries to ruin his (pretty much already ruined) relationship with Veronica; for some reason she remains loyal to him, though, continuing to lie for and defend him.

There is one thing Hiram could do that would throw Hermione over the edge, however, according to Nichols, and that's hurt Veronica. She says, "If he hurt Veronica, that would be it. If he was willing to expend her and put her in direct harm's way, then absolutely, that'd be done."

Now that Veronica wants to play a larger role in Lodge Industries, though, who knows what could happen. There are dark secrets and shady dealings that Veronica would certainly not approve of, and Nichols herself is unsure of how the rest of the season will pan out for the family. The actress reveals,

I think that Hermione is realizing that she's not going to be able to keep Veronica at bay, and the choice is more of how do we involve her rather than if. It's kind of unavoidable I think. How much do we tell her and how much do I even know? We'll see.

Ultimately, the actress settled on one explanation for why she hasn't left Hiram and started the love affair we've all been waiting for with Fred Andrews; she tells Insider,

I guess we'll have to wait and find out how everything turns out with The Lodge's. Right now we're wary of Hiram, but let's not forget this is Riverdale, so nothing is ever as it seems.