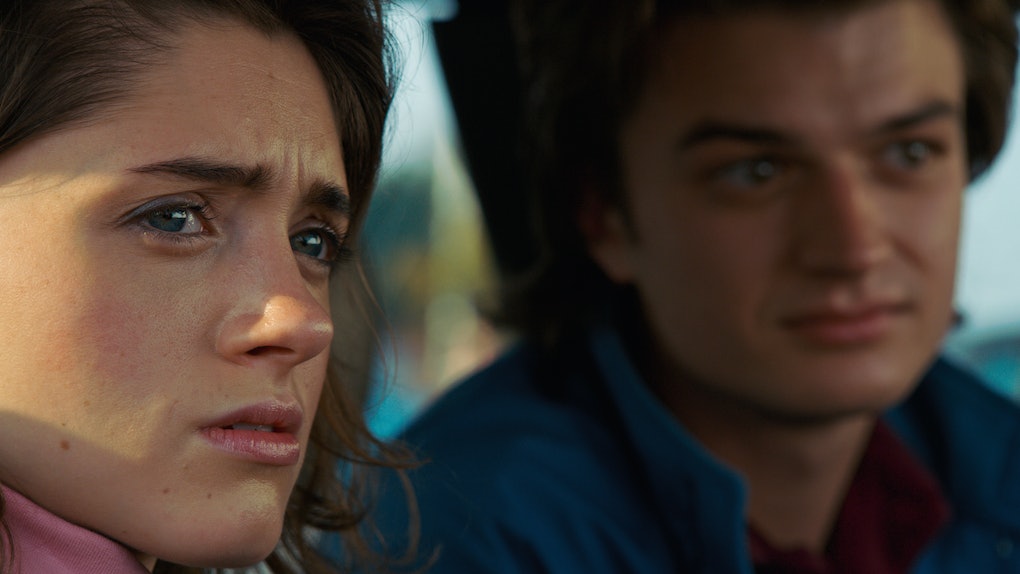 What Are Nancy & Steve For Halloween? 'Stranger Things' Halloween Episode Had Great Costumes

One of the chief delights of Stranger Things has been all of the 1980s references that are packed into every episode. Even if Max might call the story slightly derivative for all the famous media that the Duffers pulled from, identifying all the allusions is a favorite past time of fans. And nowhere is the show more stacked to the gills with obscure minutia than the Halloween episode. But what are Nancy and Steve for Halloween? Other than "normal teens partying and getting drunk"? Please note: This post contains spoilers for Stranger Things Season 2.

From the moment we follow Billy the new "Keg King" into Tina's party house, the references come thick and fast. There are at least two Madonnas, one in the wedding dress outside, and one that's from her "Borderline" video as we walk in. Billy is kegging with Steve's former friend Tommy, who is dressed as the Karate Kid. There's also a Footloose girl outside in just a cut up sweatshirt. As well as your cheap looking kings, vampires, and playboy bunnies, there's a Caveman from the early 1980s film of the same name, there's a Ronald Reagan, those quintessential silver googly eyed glasses dancer, and then there's Steve and Nancy.

But who exactly are Steve and Nancy supposed to be?

Yep, they are dressed as Joel (Tom Cruise) and Lana (Rebecca De Mornay) from the 1983 film Risky Business.

It was Tom Cruise's first breakout hit. What most people remember is the famous dance sequence where Cruise, alone at home, gets drunk and plays air guitar to Bob Seegar's "Old Time Rock and Roll."

But while this is certainly one of the movie's highlights, what most people don't remember is that the actual plot of the movie was a romantic comedy. Lana is an older woman escort that the young and dumb teenager hires for the night, never considering how much she might bill him for in the morning.

While much of the plot of the movie revolves around Joel trying to pay for all the things that go wrong over the next two hours, like a crashed Porsche, and Lana's pimp stealing all the family's furniture, by the end of the movie Joel and Lana have admitted they are attracted to each other. Lana even suggests she'll give up her job to keep seeing him now that he's been accepted to Princeton.

Part of the reason why it might not be obvious at first glance is that Steve, despite his claim that they worked "so hard" on these costumes, is not quite accurate. Instead of a grey sports jacket with his sunglasses, he's black on black on black, but it suits him.

Here's the actual outfit, with the Ray Ban sunglasses that became an icon of the early '80s. It's from the scene where he's interviewing for Princeton.

She, on the other hand, is in Lana's final outfit, the one she's wearing at the close of the film, when she's planning on giving up her escort trade.

The irony of the two of them dressing up as these two characters, who begin their relationship with her pretending to be in love with him for cash should not be lost on anyone. Especially since by the end of the night, Nancy has been sloshed with punch, making her look less like a high end escort and more like a murder victim in a Halloween movie, and admitting that she was just playacting at being in love with Steve the whole time.

Next time, kids, dress as people from an 1980s movie who are really in love, like Sam and Jake from 16 Candles.