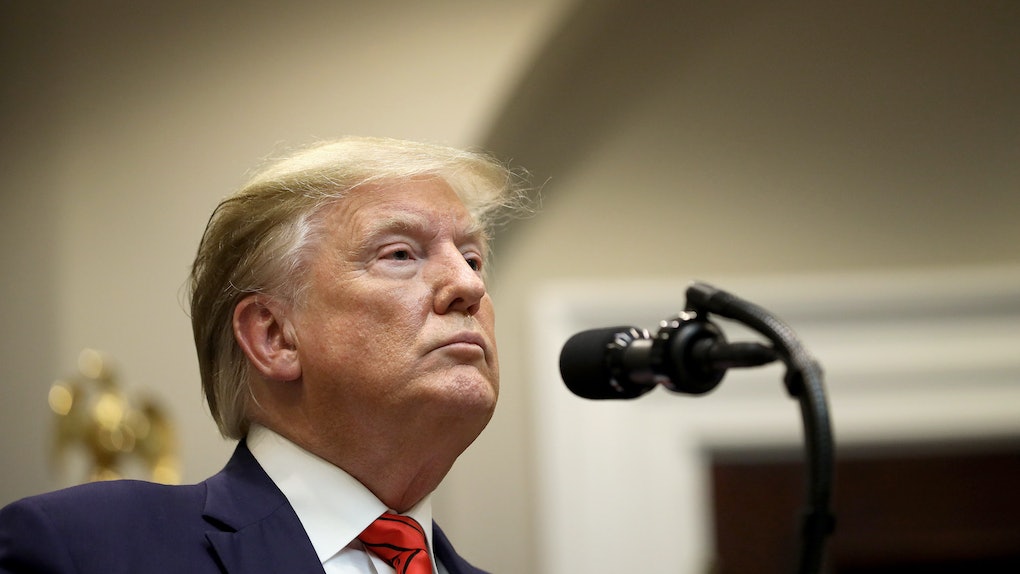 What Are High Crimes & Misdemeanors? These Impeachment Requirements Are Tricky

In recent weeks, the word "impeachment" has taken over headlines. On Sept. 24, Speaker of the House Nancy Pelosi announced the House would begin official impeachment inquiries into Trump, which the White House characterized as Democrats' attempts to "weaponize politics" in a statement to Elite Daily. However, the impeachment process can be lengthy and tricky to understand, so it's helpful to know exactly what the qualifications are for impeaching a president. What are high crimes and misdemeanors? They're key.

Ultimately, besides the very specific possibility of treason or bribery, "high crimes and misdemeanors" are the charges on which a president can be impeached, according to Section II Article IIII of the Constitution. "The President, Vice President and all civil Officers of the United States, shall be removed from Office on Impeachment for, and Conviction of, Treason, Bribery, or other high Crimes and Misdemeanors," the Constitution reads.

The problem? High crimes and misdemeanors aren't explicitly defined by the Constitution, which was probably intentional on the part of the framers. "High crimes and misdemeanors is what’s called a term of arts. It’s an expression, it doesn’t mean crimes and it doesn’t mean misdemeanors the way we know it," Barbara Radnofsky, author of A Citizen's Guide To Impeachment, told Elite Daily in 2017. The legal phrase is borrowed from British law, and can mean basically anything that causes harm to American society. "What it means in the United States is some act or omission of a high official that causes substantial harm to society," Radnofsky explains.

In general, the term can refer to instances where a president directly abused his powers of office, or committed acts that endanger the American people. However, it's ultimately up to Congress to define the term and make the call to impeach, which is where it can be tricky. In fact, President Gerald Ford once stated, "An impeachable offense is whatever a majority of the House of Representatives considers it to be at a given moment in history." So, the exact definition of a "high crime" or "misdemeanor" is still debatable.

Only two U.S. presidents have ever been impeached — President Bill Clinton in 1998 and President Andrew Johnson in 1868. Both were acquitted in the Senate.

On Sept. 24, House Speaker Nancy Pelosi announced that she would open an official impeachment inquiry into President Donald Trump. "Today, I'm announcing the House of Representatives is moving forward with an official impeachment inquiry," Pelosi said. "I'm directing our six committees to proceed with their investigations under that umbrella of impeachment inquiry." The inquiry was spurred by a Sept. 18 report from The Washington Post revealing that an anonymous whistleblower had filed a complaint about a July 25 phone call between Trump and Ukrainian President Volodymyr Zelensky, in which Trump asked Zelensky to investigate 2020 presidential candidate Vice President Joe Biden. Trump has admitted to the conversation, but denied wrongdoing. Some House Democrats have criticized Trump for his request to Zelensky, stating that enlisting foreign nations to investigate a political rival could represent an abuse of power.

President Trump responded to the impeachment inquiry by claiming "PRESIDENTIAL HARASSMENT" in a tweet.

Despite the criticism, Trump has reiterated his call for Ukraine to investigate the Biden family, and on Oct. 3, he told reporters that China should also investigate the Bidens. Per The Guardian, this is likely due to Hunter Biden's presence on a 2013 trip Biden made to China as vice president. At the time, Hunter was setting up a private equity fund that included Chinese investors. In an emailed statement to Elite Daily, Biden's Deputy Campaign Manager and Communications Director Kate Bedingfield responded to Trump's comment by condemning the president's actions and words. "As Joe Biden forcefully said last night, the defining characteristic of Donald Trump's presidency is the ongoing abuse of power," a part of the statement read.

Even if Congress impeaches Trump, though, it doesn't automatically mean he'll be removed from office. While the House votes to impeach a president, it's up to the Senate, which is currently Republican-controlled, to convict. Conviction and the subsequent removal requires a two-thirds majority vote from the Senate.