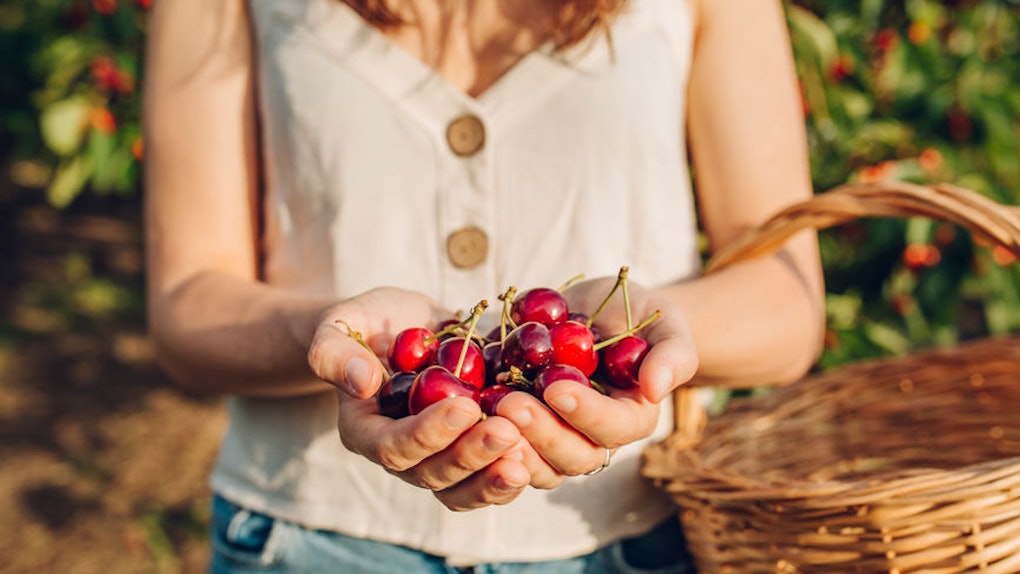 What Are Groundcherries? The New Fruit Sounds Delish, So Here's When You'll Find It In Stores

When I first heard about about cotton candy grapes, I was definitely intrigued. I'm a total sucker for any kind of unusual fruit, TBH. So when I came across another unique kind of produce, I couldn't wait to learn more. Groundcherries are a delicious new fruit that you probably haven't tried before, but once I tell you a bit about them, I guarantee you'll want to give them a taste.

According to CNN, the fruit tastes like a combination of vanilla, pineapple, and — unexpectedly — it apparently has some undertones of tomato. At first, that last ingredient sounded a little weird to me, but then I remembered that tomatoes are technically considered to be fruits, and they are pretty sweet, so I was quickly onboard again.

But once I started to really dig into what exactly these little berry-ish plants are, I realized that I've actually tried them before. The fruits, which, according to Good Housekeeping, are also called "cape gooseberries," look a little like a bright yellow cherry tomato. These might just be the most multi-named fruits I've ever come across, because they also seem to go by the name "golden berries," according to produce company Sunbelle. Here's what they looked like when I (unknowingly) came across the fruit myself back in July:

According to Smithsonian Magazine, the tiny fruits have a texture that's kind of like a mixture between a grape and a tomato, and they're covered in a light husk that you have to remove before digging in. IMO, I definitely think there's a little bit of a pear texture in there, too, as groundcherries have a little bit of a grainy feel once you take a bite, at least in my experience.

Although CNN reports that groundcherries are available in some parts of the United States, as well as in Central and South America, they're pretty difficult to grow because they often fall off the vine before they're fully ripened, the news outlet explains. If researchers continue their efforts to produce groundcherries on a larger scale, the fruits will hopefully arrive in U.S. grocery stores sometime within the next couple of years, according to CNN. They already tend to grow naturally in wild areas, but aren't yet properly domesticated, as per the news outlet. Personally, I've only come across them once at an enormous farmer's market in DeKalb, Georgia, but I've yet to spot a groundcherry — or a golden berry, or a cape gooseberry (seriously, why does this thing have so many names?!) — in a major supermarket.

"There has been an increase in buzz lately about groundcherries due to some advances in non-GMO crossbreeding techniques that have allowed for a more controllable and growable version of groundcherry to be created," Dr. Mike Roussell, Ph.D., co-founder of Neutein and Neuro Coffee, tells Elite Daily in an email. "This will allow for it to be produced in a way so it can be accessible to grocers all over the country."

If the fact that this fruit is genetically modified freaks you out a little, don't worry. It's probably pretty similar to the produce you already eat on a regular basis. "We have been eating mutations in plants and animals since humans started to improve crops thousands of years ago," Zachary Lippman, a Howard Hughes Medical Institute investigator at Cold Spring Harbor Laboratory, told CNN. "That's a random process and took thousands of years. With gene editing, you're now just making one mutation in one gene in the simplest sense."

Plus, according to Dr. Roussell, this type of mass produce production is what will eventually allow groundcherries to be sold in high quantities at your local grocery store. What's more, he says, these crossbreeding methods could also enhance the nutritional qualities of the food. "For example a memory product I developed, Neutein, contains antioxidants from a special kind of spearmint plant that was grown via non-GMO crossbreeding (not gene-editing)," he explains. "This special type of spearmint contains five times the antioxidants (more than 50 different ones) as a result."

So what are the health benefits of this tiny fruit? Unfortunately, groundcherries are better for your taste buds than they are for your body. "Its health benefits are very hyped, but there isn't much substance to the claims of being high in various vitamins, minerals, and protein," Dr. Roussell explains. For example, one cup of groundcherries contains only two grams of protein, Roussell tells Elite Daily. The same amount of green peppers, he says, contains over five times more vitamin C than the groundcherry equivalent.

But, in my personal opinion, groundcherries are delicious enough that they don't need to be especially healthy, too. So if you ever come across a couple of these sunshine-like fruits in a small market or on the side of the road in the rural south, take my word for it and try them yourself.