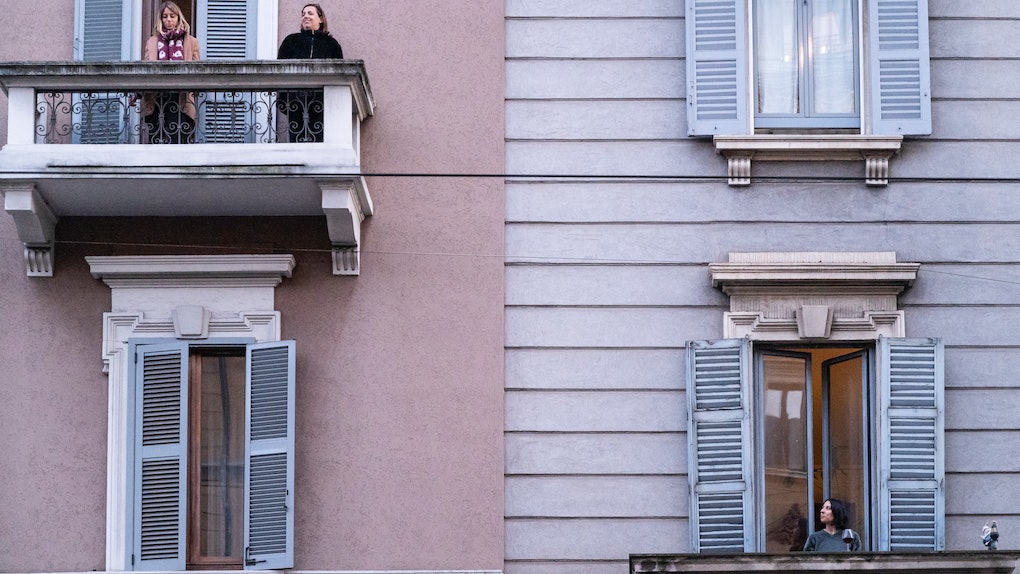 We're On Coronavirus Lockdown In Italy. Here's What We Want American Teens To Know Now

As the novel coronavirus (which causes the disease COVID-19) continues to spread around the world, local and national governments are scrambling to control the outbreak. In Italy, the rapid increase in cases led officials to close all schools and universities as of March 5, before ordering a lockdown of Lombardy, the epicenter of coronavirus cases, which includes Milan, on March 8. One day later, on March 9, the lockdown was extended throughout the country. Residents were ordered to remain in their homes except for necessary activities and travel, such as food shopping. As of March 18, the death toll in Italy has increased to more than 2,500.

David Moreno, 17, and Emily Moreno, 15, siblings originally from Miami, Florida, have been living in Milan for five years. As of March 18, they are still on lockdown. They spoke to Elite Daily’s news editor Lilli Petersen about what it’s like to not see your friends for weeks with no end in sight, and what they wish they could have told themselves two weeks ago, before Italy went on lockdown.

On canceling school and before the lockdown:

David: When they canceled school for the first week, it was — I'm sorry, I'm a teenager! — awesome. It was a great break from school. We didn't take it that seriously at all. The first week school was closed, I was still trying to get my friends to come over. The government was saying, "You guys should stay inside, avoid contact with other people.” But nobody was really listening to it. I still wanted to see my friends and stuff.

Emily: I asked my friend if she wanted to come over, but she couldn't. Her mom wouldn't even let her open the window. And I thought, “Oh wait, maybe this is a big deal.”

The first time I went outside after the announcement, I thought I was gonna die.

David: Then the government canceled school for another two weeks, and they told us to stay inside and not go out at all. My mom and I were kind of nervous at that point. We thought, “Do we have enough food for all four of us to stay inside for a few weeks?” Since we're from Miami, we're used to when hurricanes come and people just raid the supermarkets.

We went to the market early in the morning. A few hours later, we saw a news report that everything in the supermarket was gone. People had just completely raided everything. We were shocked. For me, that was when I was like, “Holy sh*t, this is a real thing.”

Emily: The first time I went outside after the announcement, I thought I was gonna die. I thought I was gonna catch the coronavirus just walking down the street, and I got so scared. [Editor’s Note: The U.S. Centers for Disease Control and Prevention (CDC) recommends maintaining a minimum distance of 6 feet from others in order to prevent exposure to the coronavirus. The virus is thought to spread by close person-to-person contact.] One day right before the lockdown went into effect, we were out walking around and we went to a gelateria — an ice cream store — and there was nobody there. It was completely empty. Normally they're super full, but there was nobody there.

We haven't seen our friends in three weeks, since Feb. 21, because we were already on school vacation when the schools were closed. I'm doing online classes through Microsoft Teams for six hours a day now, and after that, I'm doing nothing. I sit on my couch and that's about it.

David: I'm only doing about one or two hours of school every other day, with the teachers who have been able to keep up and use technology to do group chats on Google Meet. I don't know how we're going to catch up on all this work. It's gonna be hard. I don't know what's gonna happen. I’m a film student, so I also have a little YouTube channel that I use, and I made a short film about life on lockdown. I stay busy.

On how Italian and American teens are dealing:

Emily: In my American friends, I see different types of personalities emerging. There's one type who’s really, really serious and really paranoid about the coronavirus. The other type isn’t even thinking about it. Meanwhile, my Italian friends are like, "Yeah this happened. I'm not gonna freak out about it."

I was texting some of my friends and they’re always going out. I'm like, “This is serious. It's not a joke."

David: All of my Italian friends are posting about how much it sucks to stay inside. And all of my American friends… they just are not taking it seriously at all. I was texting some of my friends and they’re always going out. I'm like, “This is serious. It's not a joke."

I was scrolling through Instagram, and I saw a guy from America making a meme about the coronavirus. A few weeks ago, even a week ago, I would have found that hilarious. But now it’s not funny at all. It’s wild. It shows it didn't affect me at all before.

Emily: I've seen a lot of memes about people throwing each other under the bus. Like there's one of somebody sneezing, and everybody attacks them with hand sanitizer. It's funny at first, but then it's not.

On going out in the middle of a pandemic:

David: It's really wild that American teens are still going out. People think, "Oh, it's not gonna affect me. I'm just a teenager. It can't get to me, it only gets to old people. Don't worry about it.” It's so stupid to think like that, because not only is that not proven, but what if you do have it and you haven't had symptoms yet, and you spread it to someone else? Do you want to take the risk of infecting other people who are actually in danger just because you wanted to go out with your friends and socialize? That's what teens have to ask themselves now. [Editor’s Note: While older adults and those with preexisting conditions are at highest risk for severe illness, per the CDC, people of all ages have become sick. The CDC also notes that although people are thought to be more contagious when displaying symptoms, there have also been reports of potential transmission of the coronavirus from people who are asymptomatic.]

It's silly for anyone to assume that it's only young people going out. This applies to anyone.

Emily: You might have it and not have any symptoms, so you won’t even know. But even if you are completely healthy, going out sets a bad example for someone else who might have it, and that encourages other people to keep going out and ignoring the risk. That's a lot more dangerous than just you, as one person, going out.

My advice is to avoid any social places. I know it sounds like we’re saying that over and over, and I know everybody's telling you to stay inside and you're kind of tired of hearing that message. I get it. But the only thing you can do is to just stay inside.

David: But it's silly for anyone to assume that it's only young people going out. This applies to anyone. There might be more young people and teenagers who are going out, but you can't just put all the blame on teenagers.

On their advice to others:

Emily: It could be worse than not being able to go out. Testing positive for the coronavirus would be so scary, because you wouldn't want to infect your family. You'd actually have to stay alone for a long time. [Editor’s Note: The incubation period for the coronavirus is believed to be anywhere from two to 14 days. The CDC recommends people who become sick with the coronavirus and can’t be tested do not end their self-isolation until at least seven days after symptoms first appear, and at least three days after a patient’s fever ends.]

David: What she said is exactly right. Nobody wants to stay inside for up to three weeks, and yeah, that's gonna suck. But people need to know that this can get a lot worse. Think of the people who have it — they're completely in isolation.

Staying in isn't the bad thing! This is the warning to prevent the bad thing. This is taking precautions knowing things that can get much worse. So take it seriously, because this isn't a punishment.

It probably still hasn't even sunk into the heads of some kids back in America that the coronavirus is actually a threat. I remember the first few weeks of this, I didn’t think it was a threat. People need to realize that this is actually a danger to their lives, and I think once they realize that, then they'll take it seriously. But until they do, then nothing the two of us say or do is gonna change their minds.

This interview has been edited for length and clarity.

More like this
Will Colleges Require A Coronavirus Vaccine In Fall 2021? The Rules Are Clear
By Rhyma Castillo
Lil Nas X Is Going To Hell & He’s Making That Sh*t Gay
By Ciarra Jones
The More Contagious B-117 COVID Variant Is Now The Most Common Strain In The U.S.
By Rhyma Castillo
Stay up to date