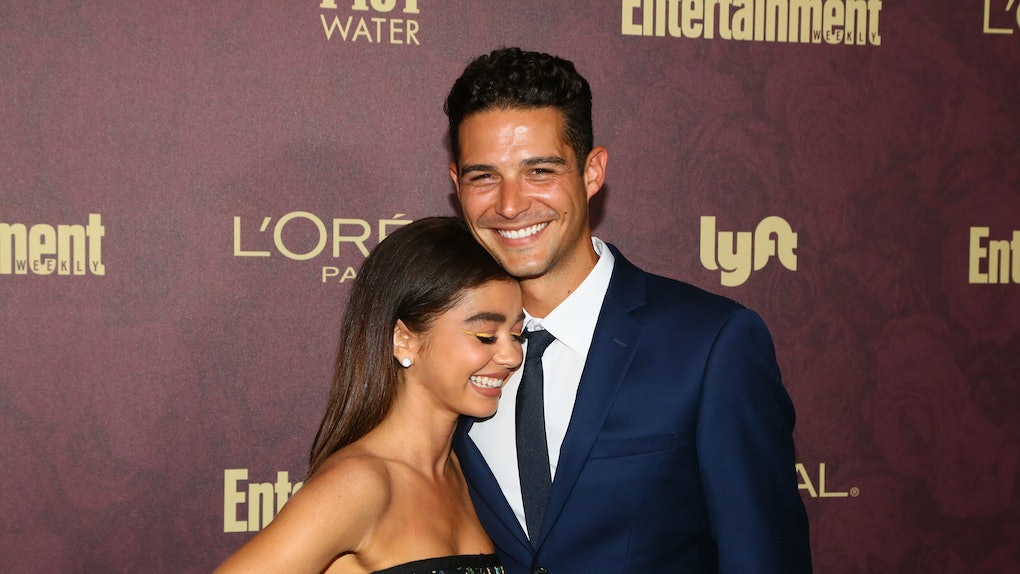 Ugh, can we just take a minute to recognize how adorable Wells Adams and Sarah Hyland are? They're both talented, sweet, and attractive on their own, so when they got together, it was practically magic. Unsurprisingly Wells Adams' quotes about Sarah Hyland are the exact thing you need to get you through the week. After all, it's been a rough few days in the world of celebrity relationships. Honestly, it's been a rough couple of years. Way too many great couples in Hollywood have ended things, so reading Adams' quotes about his girlfriend of one year will definitely remind you that all hope is not lost.

These two just celebrated their one-year anniversary, but it definitely seems like they've been together for longer than that. They're constantly gushing about each other on social media and IRL and regularly keep us up to date on their day-to-day lives, which makes them that much more relatable.

They both have successful careers, cute dogs, great senses of humor, and most importantly, each other! Now that they've been together for a year and are officially living together, they're still going strong. Read on and try not to ugly cry at all the cute things that Wells (BF Goals) Adams has said about Hyland. Good freaking luck.

1. When he wished her a happy birthday.

Adams and Hyland are both pretty open about their relationship on social media. So when Adams wished Hyland a happy birthday back in November 2017, it was no surprise that he took to Instagram to do so. Sharing a photo of the happy couple standing in front a super cool helicopter, Adams wrote:

"Top 5 ways helicopters are like Sarah: 1. They make you feel like you're floating. 2. Every moment with them is an adventure. 3. They make you feel like you're falling, in the best way. 4. They defy gravity. 5. They are really f*cking cool. Happy birthday @sarahhyland. You're my favorite thing. Everyday should feel this good. Thanks @vineyardvines for helping out with this amazing date!"

It's OK if you need a tissue — these two are swoon-worthy.

2. When he praised Hyland's feminist speech.

Again, Adams came in strong on International Womens Day when he posted the above photo of him and Hyland at the Women's March. "This picture was taken right after @sarahhyland inspired thousands of humans at #thewomensmarch with a truly powerful speech," he wrote. "I was in awe of her that day. Honestly, I’m in awe of her every day. She’s one of the strongest, smartest, talented, hilarious, inspiring, compassionate, and thoughtful women I’ve ever met. Little girls all over the world look up to her and I can’t think of a better role model. Facemasks and clap backs!"

I've said it once, but I'll say it again: These two are ultimate relationship goals.

3. Their social media debut was subtly sweet, too.

Back before the world even knew that Adams and Hyland were an item, Adams took to Instagram to show off their costume, debuting their relationship. Dressed as Mike and Eleven from Stranger Things, Adams wrote the sweet, clever, and simple caption, "11 hangin' out with a 10."

On that day, Adams changed the Instagram boyfriend game, and it's never been the same.

4. When he celebrated their anniversary, obviously.

On Monday, Oct. 15, the two celebrated their anniversary and both Hyland and Adams shared a sweet Instagram photo of the occasion. "A couple hours after we took these pics, @sarahhyland said 'when are you going to ask me to be your girlfriend?'" Adams wrote. "I said, 'right now.' I then doubled down and said 'I’m falling in love with you.' She responded with, 'I can’t say that yet.' And then like 15 minuets later she did. Happy anniversary, baby. I love you most."

5. When he celebrated a different kind of anniversary.

Obviously, Adams' post for their anniversary was sweet, but about a month earlier, he shared another sweet milestone to his Instagram.

"I kissed this beautiful woman for the the 1st time a year ago today," he wrote. "Best year of my life. I love you to Pluto and back."

Adams and Hyland have only been together for a short time, but they've easily become one of the cutest celeb couples of the moment. Their honesty and deep love for each other is visible, and the way they talk about each other proves these two are meant to be.