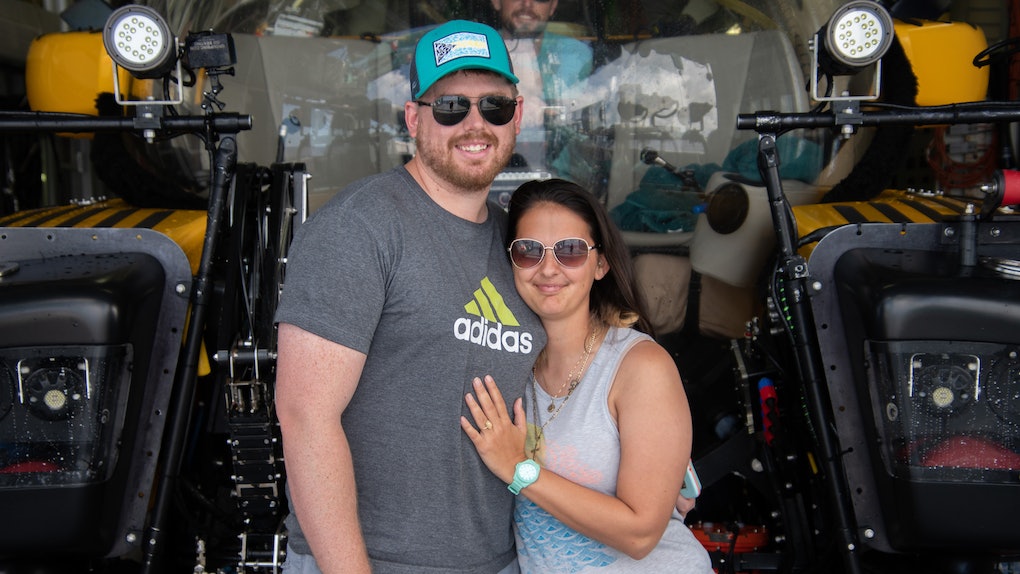 Slowly but surely, I'm approaching the age at which people in my inner circles are getting engaged. For the most part, the proposals I've seen tend to be the same. They're somewhere scenic (for example: the beach or a fancy restaurant or a nice hotel or in front of a beautiful Christmas tree, etc.), there's lots of crying and there's usually a party with friends and family shortly after. But one proposal this past January puts all the rest to shame. What proposal, you ask? Oh, you know... Thomas Pruim's underwater proposal to Christina Pilla. Yes, that's right. He proposed to her beneath sea level.

And when I say "beneath sea level," I don't mean they just took a dip into the deep end of the pool. No, instead, I mean that the couple actually got on a submarine and traveled 1,350 feet into the depths of the ocean. That depth alone makes it one of the deepest marriage proposals to date (also, like, who knew that was a thing people were keeping track of?). Oh man, my ears are popping at just the thought of it. So...yeah, this proposal was a little more adventurous than that of, say, your friends who got engaged during a sunset walk on the beach last weekend. But when you hear more about who they are as a couple you realize that it was more than just adventurous; it was also a perfectly fitting tribute to their passions and careers.

While lots of people have a fondness for the ocean that they don't necessarily act upon, Christina Pilla is truly passionate about it and has devoted her life to studying it. You see, Pilla is so passionate about sea life that she is actually a marine biologist. And what better proposal to plan for a woman who has devoted her entire life to marine biology than one that takes place beneath the sea?

The answer to that question is obviously THERE IS NONE.

So how did Pruim execute this under-the-sea style proposal? Well, to start out, he had to enter a contest. The contest was called "Night at Blue Planet II" and, put together in partnership with Airbnb and BBC, it gave entrants the chance to ride one of the submarines from OceanX's vessel, MV Alucia for one night below the ocean's surface in the Bahamas. Pruim entered and, as part of his application, he explained that, if he won, he was planning on asking his girlfriend to marry him deep beneath the sea aboard the Alucia. His response wowed the judges and... you guessed it... he won!

I don't know about you, but to me, the fact that he won a contest to even be able to get this experience makes the proposal all the more romantic. Not only did he go to the trouble of entering a contest but a panel of judges chose him (or should I say chose them) over everyone else! Adorable. Absolutely adorable.

Now, obviously, an underwater proposal isn't for everyone. While I love the ocean, myself, I have extremely weak ears that experience immense pain even when I swim in the deep end of the pool. For that reason, I don't really think traveling 1,350 feet beneath the water's surface is for me. But what's special about this proposal isn't the fact that it was under water; it's why they were under water. He planned this whole thing because he knew it was something his spouse-to-be would love and that's what every proposal should be about.

Cheers to the happy couple!