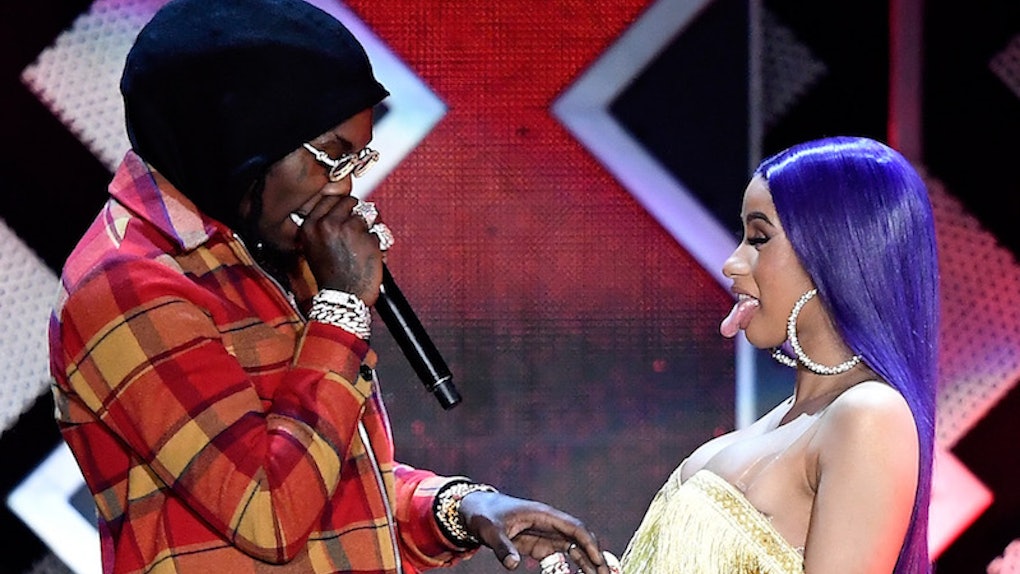 Was Offset Crashing Cardi B's Concert A Publicity Stunt? She Got Real

OK, whoa. What is going on with Cardi B and Offset? You guys might have heard that the match seemingly made in rapper heaven is calling it quits after Cardi B posted a video announcing their plans for divorce. Then, a woman popped up on social media claiming Offset had been having an affair with her. Then, he crashed Cardi B's concert trying to win her back and everyone was like, "Wait, what is actually happening here?" People are wondering — was Offset crashing Cardi B's concert a publicity stunt? How he managed to crash the stage with his intricate presentation of flowers that spelled out, "Take me back, Cardi," is cause for some suspicion, to be fair. But don't get it twisted, according to Cardi B, Offset crashing her set was no publicity stunt.

Ever since Cardi B's divorce announcement, haters have been calling BS. The timing of her and Offset's split seemed suspicious to some because Offset was/is preparing to drop his own solo album that has since been pushed back indefinitely. People felt the move to pull the plug on their relationship might have simply been a PR stunt to drum up attention. The fact that Offset just popped up on Cardi B's concert stage at her Rolling Loud festival performance on Saturday, Dec. 15, with a cake and flowers isn't doing them any favors, either. Honestly, it looks like a stunt. Who just waltzes on stage with a freaking bouquet and dessert while their soon-to-be ex-wife is busy doing her job? Where was security? In videos, Cardi B looks genuinely pissed at Offset's gesture, but, according to the interwebz, there is new evidence that has some critics convinced she was actually in on it.

Here's the video: It shows Offset seemingly being guided onto Cardi B's stage by none other than her publicist and close friend, Patientce Foster. She is the woman with red hair who seems to be clearly directing Offset toward Cardi. Fans think if he really was ambushing Cardi, why would her publicist just let him, let alone help him do it?

Honestly? Good question, and Cardi B is here to explain.

After seeing the video of Foster guiding Offset onto her stage and reviewing fans' feelings, Cardi B jumped on social media, yet again, to set the record straight. According to her, Foster is like family and has a personal investment in her and Offset's relationship. Cardi B says she understands Foster wouldn't want to get in the middle of their romantic up-and-downs, and likewise wouldn't think to turn Offset away based on the nature of their relationship. Cardi B said, "She's not just like any other publicist. She's my friend."

Y'all think I'm going to be draggin' her because I don't agree with some sh*t that she was trying to help a man that was telling her, 'Yo, I love my wife. Please help me get my wife,' cause she told me what happened. I'm not gonna let y'all drag my b*tch for that, Y'all buggin' and thuggin'.

In fact, sources close to both Foster and Cardi B told TMZ, "Patientce strongly believes Cardi is still in love with Offset and does not want to pull the plug on their marriage." Apparently, she "brought him to open the door to a reconciliation." Elite Daily reached out to Cardi B's team for confirmation on this report, but did not hear back by the time of publication.

Time will tell if Offset's efforts win Cardi B back, but we can consider the mysterious case of Cardi B's publicist helping Offset crash her concert closed for now.