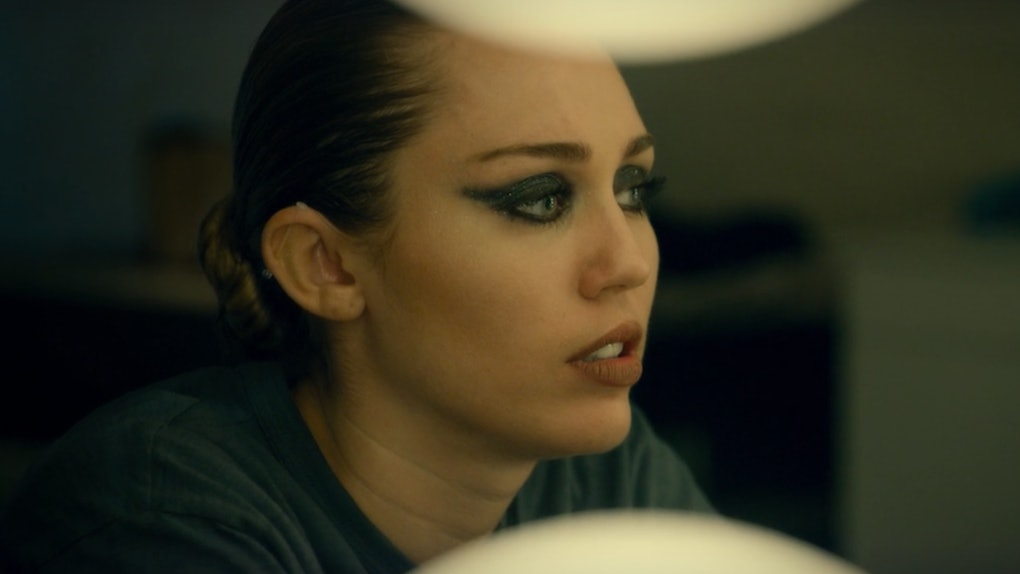 Was Miley Cyrus' 'Black Mirror' Episode Based On 'Hannah Montana'? Fans Have Questions

Miley Cyrus' new role in Black Mirror Season 5 is definitely her darkest acting project ever, but it also feels eerily familiar to Cyrus' beginning as the star of Disney Channel's squeaky-clean sitcom Hannah Montana. A lot of the premise for Cyrus' new wig-wearing, pop star character Ashely O seem like intentional allusions to Hannah Montana, leaving many viewers wonder was Miley Cyrus' Black Mirror episode based on Hannah Montana? Let's dive into all the similarities and differences between Cyrus' latest role and her most famous role.

Spoiler alert: This post contains spoilers from Black Mirror Season 5 Episode 2, "Rachel, Jack and Ashley Too." The similarities between Ashley O and Hannah Montana are immediately apparent from the beginning of the episode. Like Hannah, Ashley is known for her signature wig (which is purple rather than blonde) and is a world-famous pop star. Ashley's music also sounds a lot like Hannah Montana's — her hit song "On a Roll" is the exact positive, inspirational message that perfectly fits into Hannah's whole discography.

However, the differences between the two pop stars becomes apparent in their personal lives. While Hannah Montana always had the love and support of her dad/manager Billy Ray and enjoyed creating pop songs, Ashley O is horribly mistreated by her manipulative aunt/manager Catherine and longs to be free from her contract so she can stop making pop music.

Actually, the story seems like it may be more reflective of Miley Cyrus' life in the music industry rather than just the character of Hannah Montana. Although Cyrus did state that the episode is not her story, but rather the story of how women in the music industry are treated in general, it is hard to ignore what seem to be direct connections to Cyrus' life in the character of Ashley O. After Cyrus was done playing Hannah Montana for Disney, she made it no secret that she did not fully enjoy making the show, stating various times throughout the years that she has killed Hannah Montana since parting with Disney. Much like Ashley O immediately embraced a dark and dangerous new music genre after being free from her purple wig, Cyrus celebrated no longer being Hannah Montana by announcing her freedom in the single "Can't Be Tamed."

Obviously, Miley Cyrus was not put into a permanent coma and subliminally farmed for new song ideas like Ashley O was, but the Black Mirror episode does seem to be making an explicit statement about the importance of artistic freedom, and how hard it may be for a pop star to actually find that amongst all the studios and managers trying to control things.

Emphasizing that point even more, it does not feel like mere coincidence that Ashley O's hard rock final song "God Money" sounds like it would fit perfectly on Miley Cyrus' brand-new album She Is Coming, which was released just days before the Black Mirror episode. Much like Ashley shed her wig and pop star status to embrace grungy rock music, Cyrus has done the same with her current record. So, even though Cyrus was clear in stating that the Black Mirror episode is not her story, viewers can still see a lot of parallels there.

More like this
'Elite's Season 4 Release Date Teaser Introduces The New Cast Members
By Abby Monteil
Kyla-Drew On 'Dad Stop Embarrassing Me!', College Life, & Michelle Obama
By Dylan Kickham
These Fake 'Riverdale' Brand Names Are Even Better Than The Real Thing
By Rachel Varina
Stay up to date