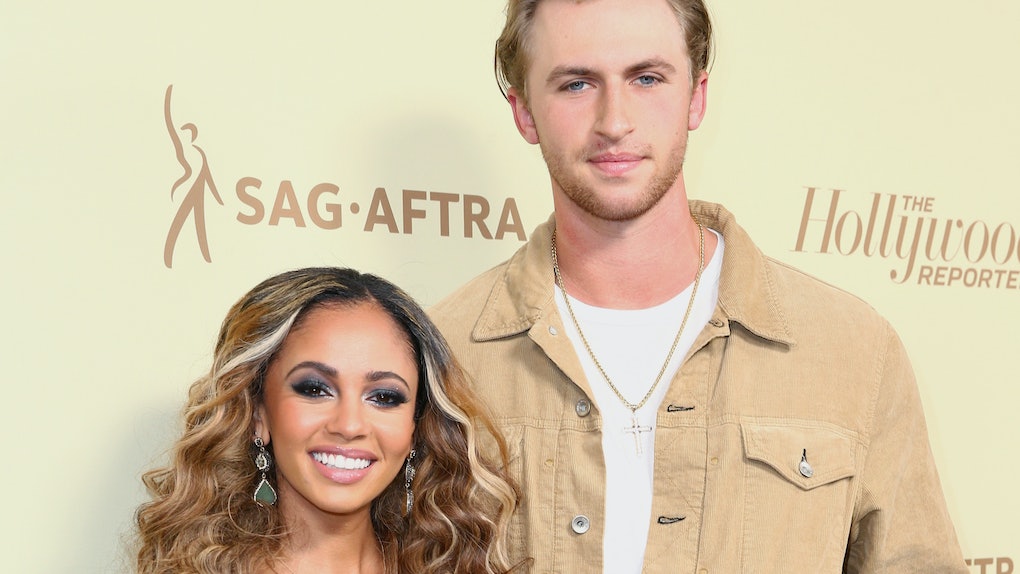 It seems Vanessa Morgan and Michael Kopech's whirlwind relationship has reached its conclusion, and I truly didn't see this one coming. Just two days after the Riverdale star announced she's pregnant with her first child, court documents obtained by The Chicago Tribune revealed her husband of six months had filed for divorce on June 19. While it's unclear why the two decided to split, it's possible Vanessa Morgan and Michael Kopech's astrological compatibility (or lack thereof) may have had something to do with it. (Elite Daily previously reached out to reps for Morgan and Kopech for further comment on the pregnancy and divorce but did not hear back in time for publication.)

Morgan was born on March 23, which makes her an Aries. Kopech's birthday falls on April 30, making him a Taurus. An Aries-Taurus relationship definitely has the potential to succeed, but it's not always smooth sailing with these two. Both signs are known for valuing honesty and reliability, so this duo isn't likely to let each other down. They also share a penchant for stubbornness, but unfortunately, this shared trait tends to hurt them more than help them. Rams and bulls both have horns, and when these two hard-headed signs go head-to-head, it's unlikely either of them will be willing to back down.

Aries tend to be passionate, confident leaders, and — just like her on-screen character in Riverdale, Toni Topaz — Morgan is fierce and fearless. As Morgan told Teen Vogue back in Oct. 2017, "[Toni is] chill; she's a boss; she doesn't really care about what anybody thinks," and IMO, she might as well have been describing herself. When trolls criticized the actor back in Oct. 2018 after noticing Toni was absent from a few Season 3 Riverdale episodes, she shut those haters right TF down, because Aries don't take crap from anyone.

The rams of the zodiac aren't afraid to stand up for themselves, and they're def not afraid to stand up for what they believe in. In May 2020, amid protests against police brutality, Morgan used her platform to call out issues with representation in the entertainment industry. "I'm not being [quiet] anymore," she declared, and that's a major Aries mood. Rams rarely rest, and Morgan is someone who's always down for a challenge. When asked about her future goals by Harper's Bazaar in Nov. 2017, Morgan said, "I would love to do some type of action feature. That's my goal. A really cool, Transformers-type feature would be awesome." Spoken like a true Aries queen.

Unlike tireless Aries, who are always up for adventure, Taureans crave stability and predictability, and they'd rather straight chill than seek thrills. These laid-back individuals are happy to let others take the lead, as they're more interested in focusing on their own passions than inspiring passion in others. And despite being a public figure, Kopech isn't in the game for fame. "...who I am isn't necessarily the center-of-attention person," the White Sox player explained during a Jan. 2020 appearance on the McNeil & Parkins Show. "I'm not looking for the spotlight. I'm just looking to get my stuff done and get out."

For bulls, self-care isn't just a priority — it's a way of life. While Aries dedicate most of their time to helping others, Taureans recognize the importance of taking care of themselves. During his interview on the McNeil & Parkins Show, Kopech spoke about how have a "self-care routine" was "comforting," as it brought stability to his life. "I have a real life and a real support group and a real loving family, and that's really what defines me," he said. Above all, the bulls of the zodiac seek comfort in all aspects of their life, while Aries constantly push themselves out of their comfort zone.

Aries and Taurus approach life with different objectives and at different speeds, and they stubbornly believe their way is the right way. Both signs may seek a partner they can rely on, but you can't rely on an Aries-Taurus relationship to always work out.

More like this
Travis Barker & Shanna Moakler's Zodiac Signs Help Explain Their Split
By Rachel Shatto
Katie Thurston's Ex Joked About Her 'Bachelor' Entrance In His Stand-Up Act
By Corinne Sullivan
4 Zodiac Signs Most Compatible With Sebastian Stan, A Loving Leo
By Rachel Shatto
Stay up to date