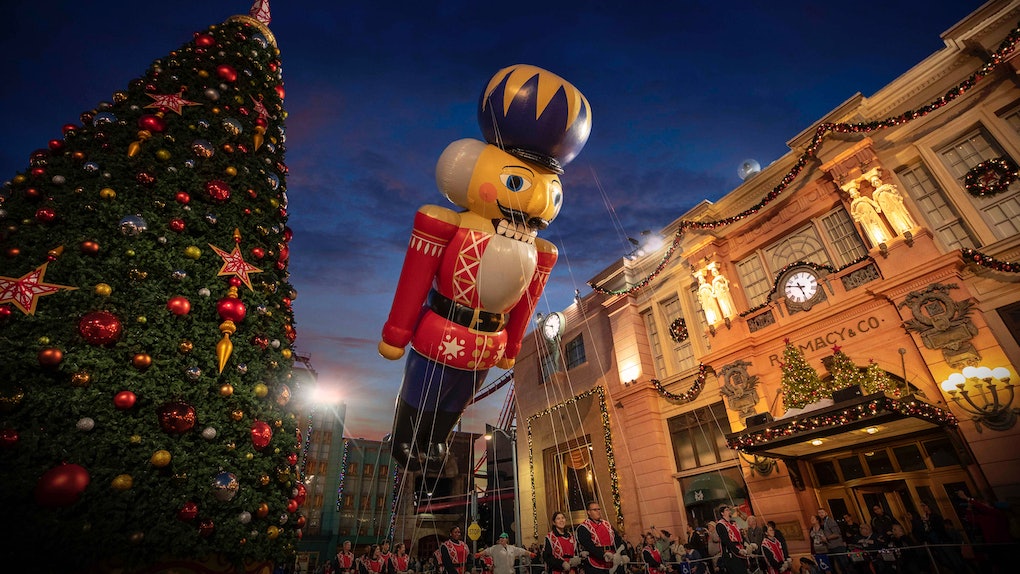 It's the most wonderful time of the year... to head to a theme park. While you may be starting to decorate your tree and hang your fairy lights around the house, Universal Orlando Resort's Holidays Celebration is already in full swing. With festive food, decorations everywhere, and holiday-themed shows, there's no better time to book your flight to Florida to see it all.

Who wouldn't want to spend this festive time of year in the Wizarding World or get a chance to meet the Grinch and try to change his views on Christmas? Just imagine getting your entire family together in matching sweaters to take a group photo in front of Hogwarts Castle all decked out for the season.

On top of all that, you can get your holiday shopping done with all the Grinch and Harry Potter merchandise you can imagine. For this annual event, both parks — Universal Studios Florida and Universal's Islands of Adventure — are embracing the season, and you should too.

If you're still patiently awaiting your Hogwarts letter, make your first stop on your Universal day be the Wizarding World of Harry Potter. Both Hogsmeade and Diagon Alley have been transformed for Christmas with decorations and seasonal shows. Try some warm butterbeer as you shop for new house robes or Harry Potter-themed Christmas ornaments like a chocolate frog.

At night, you can enjoy the "Magic of Christmas at Hogwarts Castle" show, which projects lights onto the castle that'll make you want to rush home and re-watch all the movies again. There's also a "Grinchmas Who-liday Spectacular" that's part of the Grinchmas celebration at Universal's Islands of Adventure.

If parades are your jam, there's an iconic one that comes to mind this holiday season: The Macy's Thanksgiving Day Parade. Well, Universal has their very own version: Universal's Holiday Parade featuring Macy's. According to the official press release, the parade features some of your favorite characters, like the Minions and Shrek, in addition to over 30 gigantic balloons and floats.

Of course, your parks day wouldn't be complete without Instagram-worthy food. Check out all of their new festive food as you #HolidayLikeThis.

You can grab a Grinchmas chocolate cupcake in Seuss Landing because you've been so sweet this year, or pick up Voodoo Doughnut's Stuffed Santa Suit doughnut set. One doughnut is filled with Bavarian and white chocolate, while the other's filled with peppermint chocolate cream. Wash your treats down with a non-alcoholic Frozen Eggnog or Frozen Candy Cane drink, which you can find at the Production Central veranda or Gramercy Pizza at Universal Studios.

For the major dessert fan, Universal is hosting a Sweets & Sounds Dessert Party on certain nights through Dec. 15. Guests will be able to enjoy a plethora of seasonal desserts in an exclusive viewing area for both the Holiday Parade and a special Mannheim Steamroller concert performance. Tickets are $49.99 per person.

If you're already adding all of this to your Christmas wish list, it's time to start looking up flights to Florida. The Holidays Celebration is going on now through Jan. 5, 2020, so you have plenty of time to enjoy what this season has to offer.