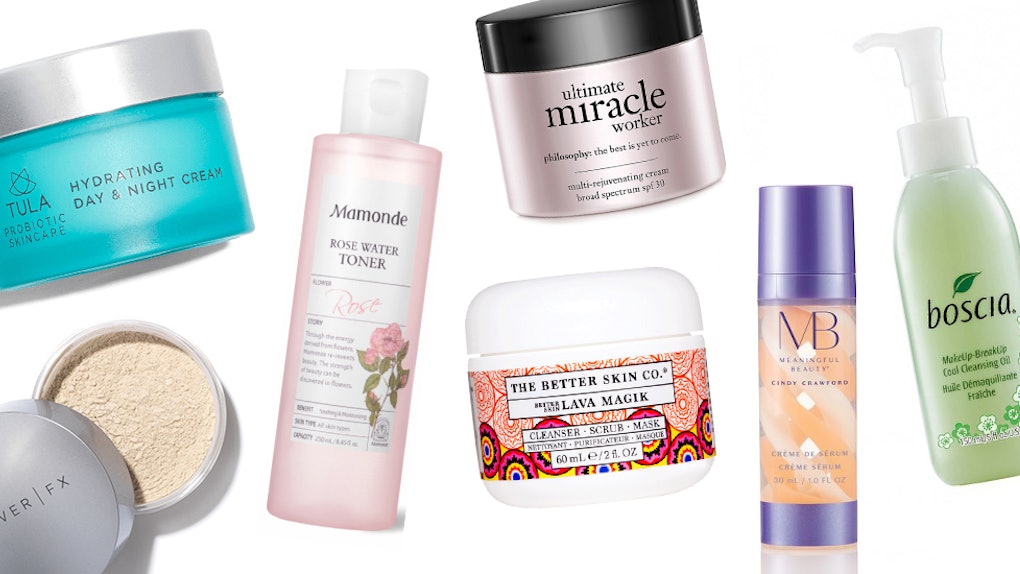 We're in the home stretch of Ulta's most major sale, people, but if you thought the deals were winding down, think again. The majority of days so far have featured sales on four brands at most, but Ulta's 21 Days Of Beauty April 3 sale has 50 percent off deals on these seven brands, so I hate to break it to you, but you're probably about to buy seven more products, minimum. They're all worth your while, though! Instead of making entire brands or product ranges discounted, this time around, they've put only the top best-selling, can't-live-without-'em items on sale, all at half off. Read on to justify your spending.

First up is a brand we've already been blessed with once before during Ulta's 21 Days: Philosophy. The March 28 deals featured the brand's Renewed Hope In A Jar, but today we're talking all things SPF as we enter into spring, summer, and most importantly, #festivalszn. That's why Philosophy's Ultimate Miracle Worker SPF 30 ($38, originally $75, ulta.com) comes in handy, since in addition to hydrating, softening, and rejuvenating your skin a la a traditional moisturizer, this baby has the added benefit of protecting against those pesky UV rays trying to give you a bad burn.

Up next is today's only deal in the makeup spectrum, but it's really the only one you need, anyway. The Cover FX Perfect Setting Powder ($18, originally $35, ulta.com) is an essential for finishing off any look, whether you're going full glam or rocking a little concealer and some SPF (No, I'm not going to stop mentioning it. Wear sunscreen!). This powder comes in two translucent shades for light and deep skin tones, and unlike some other ~invisible~ translucent powders, this one won't betray you and give off flashback in your photos. Promise!

The above are the only two deals online and in Ulta stores today, BTW, so let's move on to the online only savings. First up is the only brand with two products on sale, The Better Skin Co. Their cult-fave Better Skin Mirakle Cream ($17, originally $34, ulta.com) as well as their Better Skin Lava Magik ($16, originally $32, ulta.com) are both in today's lineup, and honestly, I'd be willing to buy both based on cute packaging alone. Fortunately, the formulas are pretty bomb, too —the Mirakle Cream has peptides, hyaluronic acid, coconut oil, sea buckthorn, and moisturizing butters, while Lava Magik has volcanic lava from France to really draw out impurities.

Need a full skincare set? Today's your lucky day! The Boscia Botanical Bestie's Kit ($23, originally $45, ulta.com) is chock full of the brand's best buys, from their powerful Pore Pudding to their reliable MakeUp-BreakUp Cool Cleansing Oil. Consider this kit tailored to all your detoxifying needs: remove your makeup, wash away residue, and nix any other impurities from your pores with some well-deserved masking.

Can you believe we're just a little over halfway through the lineup? Ulta, you didn't have to spoil us like this, but I'm so glad you did! Next up is the Mamonde Rose Water Toner ($12, originally $23, ulta.com), a product I've had my eyes on since I saw it used backstage during New York Fashion Week on models at the Alice + Olivia show. So cool! Mamonde is famous for their flower-infused formulas, so they're definitely a brand well-suited to springtime.

If you've ever been curious about Cindy Crawford's line of skincare products, Meaningful Beauty, you're in luck, because today's sale includes the brand's Creme de Serum ($33, originally $65, ulta.com). Meant to act as a powerful serum and moisturizer all in one, it's got a peptide blend, hyaluronic acid, vitamin C, and a melon complex to ensure skin looks nourished and plump.

Last but most certainly not least, Tula rounds out today's list of deals with their little blue tub of Hydrating Day & Night Cream ($26, originally $52, ulta.com). This anytime moisturizer utilizes retinol soften fine lines and texture, antioxidant-rich blueberries to fend off free-radial damage, watermelon extract to hydrate, and bifida ferment lysate, a probiotics strain to protect the skin from bad bacterias and hold in moisture so it looks supple all day long.

That's it, everybody! Let's get shopping!

All deals are live on the Ulta site now, and will run through the end of the day.

More like this
These Asian-Owned Beauty Brands Are Creating The Products You'll Use Forever
By Margaret Blatz
How To Get A Trendmood Box, AKA The Next Big Thing In Beauty Box Subscriptions
By Bella Gerard and Theresa Massony
Where To Get Farmacy's Sweet Apple Clean Makeup Meltaway Cleansing Balm, A New Take On The Classic
By Margaret Blatz and Theresa Massony
Stay up to date