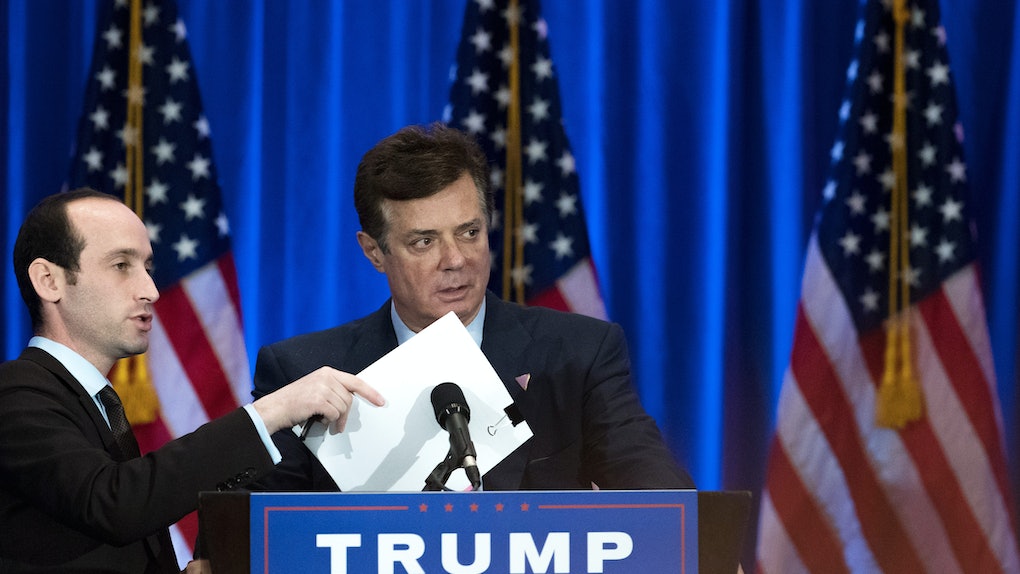 On Oct. 30, Paul Manafort and Rick Gates were charged in the Trump Russia investigation, and all outlets were quick to report the breaking news... except for one. Twitter thinks Fox News ignored the Paul Manafort coverage, and the reactions on social media are ruthless. Naturally, people used their 140 characters to the fullest.

However, Fox News didn't entirely ignore the charges, as the tweets might make you believe. At the top of the hour at 10 a.m. ET, the network discussed the reports with several guests. But there were many other moments throughout the morning when Fox chose to focus on other, perhaps less pressing, topics.

Of course, viewers were quick to comment on those other stories — the emoji cheeseburger crisis at Google, former President George H. W. Bush throwing a pitch during the World Series, research suggesting that Reese's are the go-to Halloween candy. Those pieces gave politicos a lot to work with so early in the morning, and people seemed to welcome the opportunity. Screenshots of Fox's coverage made their way onto newsfeeds across the country.

The indictment was made public on Monday morning, and it shows 12 charges against Gates and Manafort, including conspiracy against the United States, conspiracy to launder money, unregistered agent of a foreign principal, false statements, and failure to file reports of foreign bank and financial accounts. It's pretty heavy duty material, and the country is definitely at war over who is telling the truth. So to add fuel to the fire, many decided to poke fun at Fox's morning coverage.

Once it did focus on the Manafort news, Fox put a different spin on the coverage.

“Just keep in mind this,” host Brian Kilmeade said, according to The Daily Beast. “Just because they indict you, it doesn’t mean you are guilty. So if it is Paul Manafort, then they get to fight back. Mount a defense and find out what they have and go to trial and see where it goes from there.”

The president also had his own twist on the reports that have begun to surface. He took to Twitter on Oct. 30 — after applauding Fox and Friends — to comment on the situation, and in the process, he turned it around on the Democrats. Read his tweets below.

Trump's reaction comes on the heels of a rapid slew of tweets on Sunday, Oct. 29, commenting on the issue and claiming it is a "witch hunt." The indictments against Gates and Manafort were highly-anticipated, and the weekend was full of tweets waiting for the big moment to go public. Before news broke on Oct. 30, Trump wrote the following:

Meanwhile, the president's oldest daughter and White House adviser took a light-hearted approach to the morning... which also happens to be her birthday. Ivanka Trump tweeted Arabella's birthday note for her mom, and obviously the little lady didn't get the memo about what she is supposed to be celebrating. Ivanka shared a photo of her daughter's handiwork and wrote, "Arabella: Dear Mom, thank you for giving me birth. Clearly, I'm not the only member of my family who doesn't understand how birthdays work." The note is decorated with hearts and what appear to be s-like shapes. No doubt, it's adorable, but Ivanka's big day will definitely be overshadowed by this news.

Though this is just the beginning, many were waiting for Manafort and Gates' controversial past to come full cirlce. In and around August 2016, news spread that Manafort had worked for former Ukrainian President Viktor F. Yanukovych, who supported Russia and Vladimir Putin. Gates happened to be a mentee of Manafort. In August 2017, it was reported that the FBI raided Manafort's Virginia home earlier in the summer. Now, the two have officially been charged and even a third source has pleaded guilty for lying to the F.B.I.