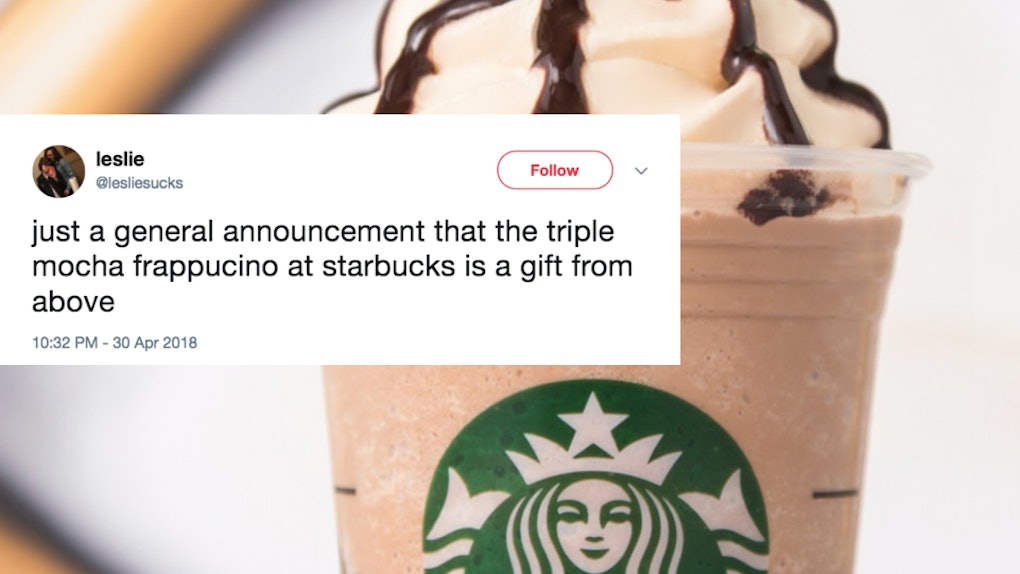 Starbucks has blessed this world with so many glorious creations. At this point, there have been far too many to count. Their latest and greatest innovations, however, have shaken Starbucks fans like no other. The Triple Mocha Frappuccino is not only a complete glow-up from the classic Mocha Frappuccino, but it also happens to be one of the first permanent additions to the Frappuccino menu in (way too many) years. In fact, these tweets about Starbucks' Triple Mocha Frappuccino show that everyone is hyped AF — and I am so overwhelmed.

It's no surprise that Twitter's coffee lovers are having a cow over the new Triple Mocha Frappuccino. Some are hyped about its delicious taste, while others are comparing it to the OG Mocha Frappuccino. Many (ahem, myself included) are also going wild over its many potential #foodporn glam shots (it's so dreamy). I'm warning you, though: There's a likely chance these tweets will inspire you to go on an impromptu Starbies run. I can guarantee that if you end going, your taste buds will thank you.

Starbucks' newest creations don't stop on the Frappuccino menu, though. On May 1, the company also brought Sweet Cold Brew Whipped Cream to the menu. It's a tantalizing mix of cold brew coffee, dark caramel sauce, white chocolate mocha sauce, and of course, whipped cream. In all honesty, it's about to top all of my future Starbucks drinks for only 50 cents extra. Can I get a double order of this stuff? Can I make it at home? It truly is everything I'll ever need in this world.

If you're in the mood for something a little lighter, Starbucks also just introduced a line of cold foam drinks. On Tuesday, April 17, participating Starbucks locations throughout the United States and Canada released several specialty drinks with their latest (non-whipped cream) topping, cold foam. If you haven't already tried it, cold foam is basically the same as hot foam, but the non-fat milk is frothed cold instead of hot, creating a cream-like texture. Specialty cold foam drinks include the Cold Foam Cascara Cold Brew, the Cold Foam Cascara Nitro Cold Brew (as long as Nitro is available at said location), and the Cold Foam Starbucks Blonde Iced Cappuccino.

In my opinion, the Triple Mocha Frappuccino is a life-changing addition to the Starbucks menu, and Twitter clearly agrees. Not only is it delicious, but it's the gorgeous treat that everyone needs in their lives this summer. The Triple Mocha Frappuccino — as well as the Ultra Caramel — are making Starbucks history as the first permanent additions to the Frappuccino menu in way too long. In addition to the Sweet Cold Brew Whipped Cream, they're a great way to kick off the new season. Let summer officially begin.