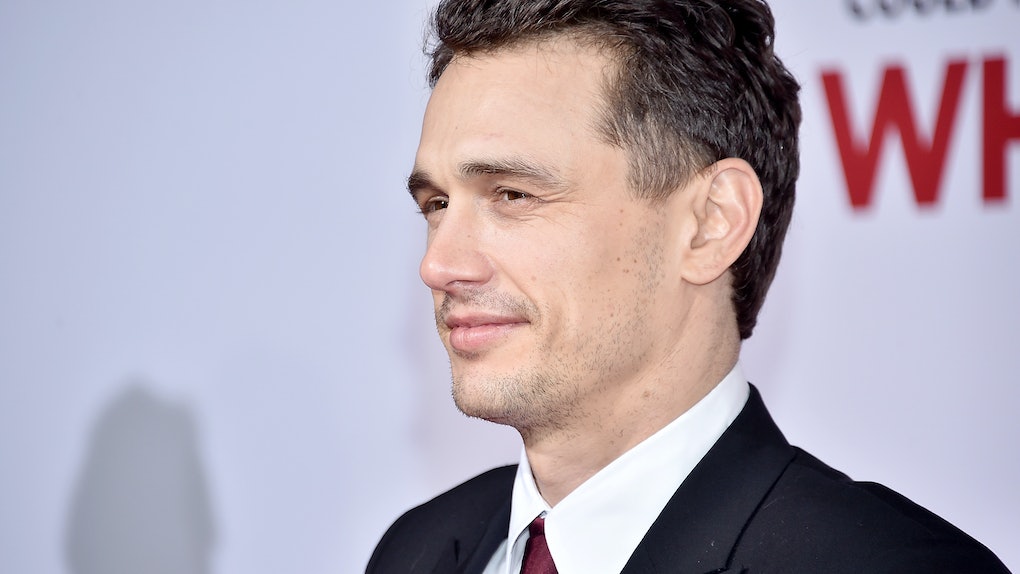 Here we are again. Another major male celebrity is being accused of sexual harassment. Two women have accused James Franco of sexual misconduct on Twitter, and their claims are very upsetting. Elite Daily reached out to Franco's team for comment, but did not hear back by the time of publication.

UPDATE: On Tuesday, Jan. 9, James Franco addressed the sexual misconduct claims during his visit to 'The Late Show With Stephen Colbert.' He told the host, "In my life, I pride myself on taking responsibility for things that I've done. I have to do that to maintain my well-being ... I do it whenever I know that there's something wrong or needs to be changed. I make it a point to do it ... The things that I heard were on Twitter are not accurate, but I completely support people coming out and being able to have a voice, because they didn't have a voice for so long ... So I don't want to shut them down in any way. I think it's a good thing and I support it." He continued, saying, "I can't live if there's restitution to be made. I will make it. So, if I've done something wrong, I will fix it. I have to ... That's how that works. I don't know what else to do."

EARLIER: On Sunday, Jan. 7, Franco accepted the Golden Globes award for Best Actor in a Motion Picture Musical or Comedy for his work in The Disaster Artist. Like many of the people in attendance, Franco was sporting a Time's Up pin in support of the anti-harassment movement providing legal funding for women who are victims of sexual assault. Shortly following the awards show, however, actress Violet Paley took to Twitter to not only accuse Franco of sexual misconduct, but also hypocrisy for wearing the pin following previous sexual harassment allegations.

In her tweet, Paley described a graphic interaction she claims happened between her and Franco in a car. She wrote,

Cute #TIMESUP pin James Franco. Remember the time you pushed my head down in a car towards your exposed penis & that other time you told my friend to come to your hotel when she was 17? After you had already been caught doing that to a different 17 year old?

Paley is apparently referring to Franco's 2014 scandal when he admitted to flirting with a 17-year-old girl on Instagram. During that time, Franco addressed his actions on Live! With Kelly and Michael and gave the following statement:

Paley did clarify that she was not underage when her alleged incident with Franco occurred, and claims the two were in a consensual relationship. However, she also claims there are "a lot more details" to come.

She posted the following two tweets:

thank you for your support just to be clear I wasn’t 17, I was an adult. There are a lot more details that will be out soon. Working with people to do it in the best, safest way

another reason it’s been hard to come forward about this. we did have a consensual relationship as well. unfortunately & fortunately, there are others who went through this same thing as me with him, and worse. I’m glad I am strong enough to speak up for all of us despite trolls

Paley continues to claim that Franco called her a few weeks before the Globes and offered her an "overdue" apology. Paley called the phone call "convenient," and suggested he donate his salary from The Disaster Artist to the anti-sexual violence organization, RAINN. She tweeted,

A couple weeks ago, James offered me & a few other girls an overdue, annoyed, convenient phone “apology”. I don’t accept, but maybe some other people’s lives would be made easier if he donated all of his earnings from “The Disaster Artist” to @RAINN01.

Shortly after Paley's accusations hit the public, another woman named Sarah Tither-Kaplan accused Franco. According to Tither-Kaplan, Franco allegedly paid her $100 to appear nude in two of his films after promising it would not be "exploitive." She tweeted,

Hey James Franco, nice #timesup pin at the #GoldenGlobes , remember a few weeks ago when you told me the full nudity you had me do in two of your movies for $100/day wasn't exploitative because I signed a contract to do it? Times up on that!

Hey James Franco, now that you have a Golden Globe why don't you give speaking roles that don't require nudity in your upcoming films to the dozens of women who have done full nudity + sex scenes in your indie films and art projects?

Tither-Kaplan claims she was not in a position to turn down jobs during the time of the nude scenes. She wrote,

When you are a struggling, unrepresented, non-union actor who doesn't have a trust fund, life is very different than for an actor who is known, union, and repped. I don't have the luxury of turning down jobs.

I rely on powerful people to help me, because I don't have access to opportunities without them. If they choose to abuse their power and take advantage of my need to work, that isn't my fault. It's the fault of the abuser.

During an interview at the Golden Globes, Franco said he wore his pin in support of equality:

Whenever any group is treated differently or given less rights or less equality than any other... it’s everyone's responsibility to stand up and make change.

Franco has not responded to Paley or Tither-Kaplan at this time.

More like this
These Tweets About Beyoncé On Netflix's 'Selena: The Series' Are Too Much
By Dylan Kickham
Is James Charles Single? Here's What To Know About The Sister Squad Star's Love Life
By Tara Martinez
These Tweets About The 2021 Billboard Music Award Nominations Are All Over The Place
By Michele Mendez
Stay up to date