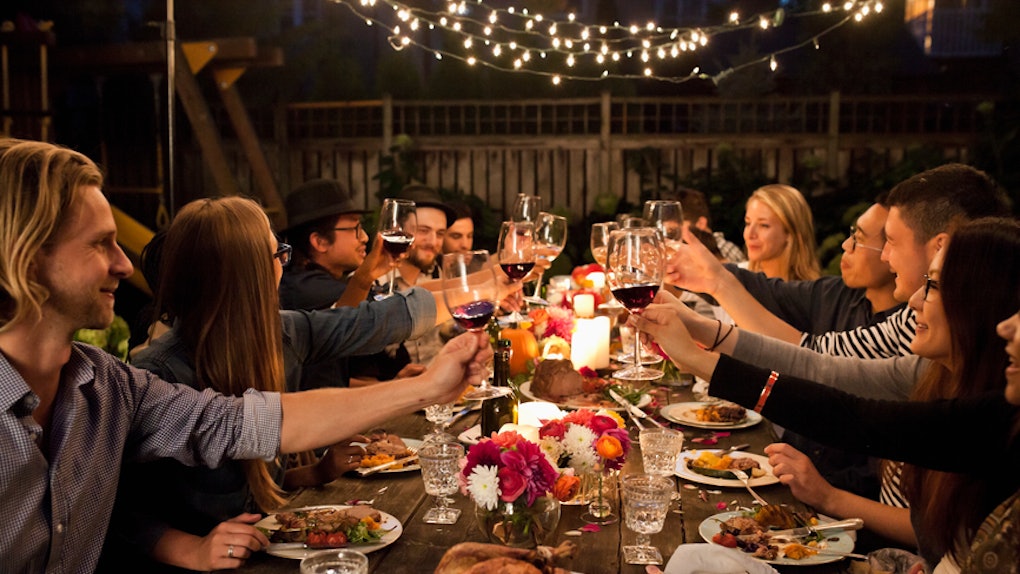 Friendsgiving can be tough. After all, who has the time to organize some big potluck dinner party between 20 different people? (More importantly, who has 20 friends? Asking for a friend, duh.) Sometimes it's the events intended to bring us together that can make us the most aware of how separated we actually are. But if you're feeling bummed about flying solo this holiday, tweets about Friendsgiving are sure to remind you how utterly normal it is to be alone during the holidays.

Between the endless torrent of social media posts and the nonstop holiday TV specials, you might start to wonder if literally everyone is whipping up some insanely delicious meal to share with all of their besties in a gorgeous overlook filled with stringed lights and themed decorations. But in truth, most Friendsgivings are just dinner. That's it.

Who's Ready For A Shark Tank Marathon?

Who knows, maybe you'll come up with the next million dollar idea! Then you can have as many Friendsgivings as you want in your mansion in Malibu, and all of your investors can be your new best friends.

Another Night Home With The Cat

Brain blast: Instead of Friendsgiving, throw yourself a Spa-Giving, and pamper the sh*t out of yourself with a manicure, pedicure, face mask, and maybe some quality time with your cat.

Table For One, Please

Hey, no one ever said that you have to have friends around for a Friendsgiving. Be your own best friend, cook some absolutely delicious food, and enjoy your solitude. At least you can guarantee you'll get your hands on seconds, right?

Honestly, I'm so down for this idea. What if we started some sort of partnership with shelters and took 50 cats and dogs home for the day to celebrate Thanksgiving the right way? And then, you know, we can just keep all of the animals in our own homes indefinitely. Again, just asking for a friend.

That Moment When You Get To The Heart Of The Matter

Craigslist, anyone? This sounds like the plot of the next award-winning indie film — or maybe perfect fodder for the next American Psycho plotline. Either way, let's do it.

It's not Friendsgiving until you've sorted through your squad and decided who you want to axe out of your life, am I right?

How Long Has This Party Been Happening Without Me?

I actually experienced this exact sentiment when I was in college and a friend referenced her longtime tradition of Friendsgiving to me.

There's nothing better than being the last one to the party. But hey, at least the invite finally came, right?

Recipes Can Be Tricky

OK, I'm not going to lie to you, this one actually made me laugh out loud. I'm just imagining someone checking off a long Friendsgiving to-do list, only to get to the bottom and remember that they literally don't have a Friendsgiving to attend. Talk about a let-down.

Nothing Better Than A Holiday Daydream

Imagine having not only enough friends to have a Friendsgiving, but friends who actually know how to use a stove without burning their eyebrows or your tastebuds. What a world, what a world.

With A Little Perspective, Solo-Giving Seems Just As Nice

I resonate with this one on a very serious level. Like, yeah, eating food with your friends sounds fun in theory, but have you ever eaten food by yourself? Because that kind of glory is something that is truly worth celebrating.

Asking For A Friend