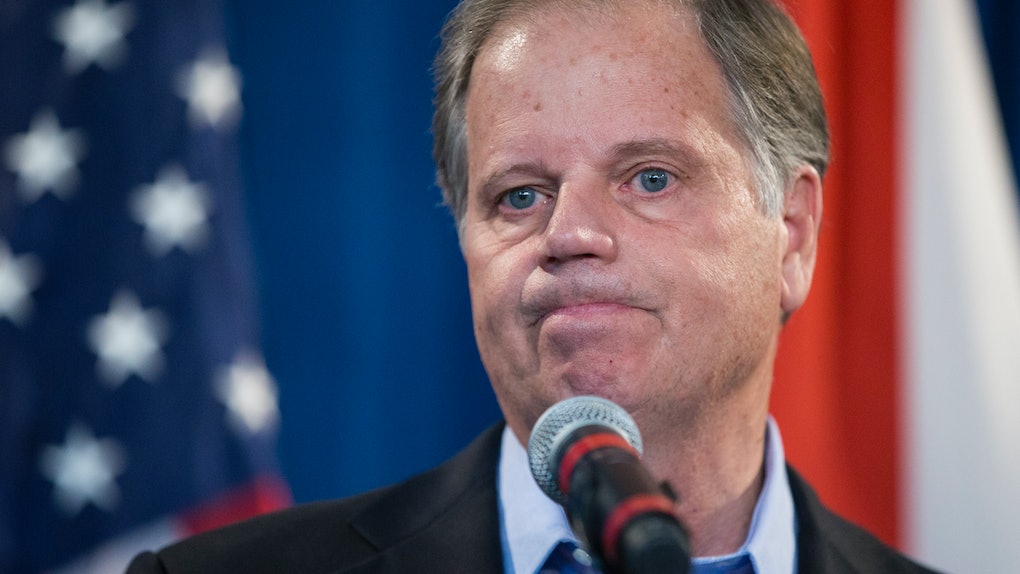 Doug Jones is coming fresh off of his defeat of embattled Republican Alabama Senate candidate, Roy Moore, and he is making the rounds with the media to discuss his historic win. Jones defeated Moore for the open Alabama Senate seat on Tuesday, Dec. 12. On Sunday, Dec. 17, Jones spoke with CNN's Jake Tapper, and Jones revealed that he believes America needs to "move on" from the sexual misconduct allegations against President Trump. As soon as the video was up, so were tweets about Doug Jones' Trump comments.

Ever since Jones defeated Moore on Dec. 12, he has been celebrated greatly for keeping Moore, who was accused of initiating a sexual relationship with a 14-year-old girl in 1979 when he was 32 years old, out of the United States Senate (Moore denied the allegations and called them "completely false."). Cut to Jones speaking with Jake Tapper on Sunday morning. When Tapper brought up the fact that some senators have called on President Trump to resign due to the number of sexual misconduct allegations leveled against him (Trump responded on Dec. 12 with a tweet denying the allegations as completely false and claiming that he doesn't know and/or never met his accusers.), Jones responded with different position on the issue, according to CNN.

Jones told Tapper that "we need to move on and not get distracted by those issues." He expounded on his position and based it on the fact that the allegations were out in the open at the time of the 2016 presidential election when he said:

I think we need to move on and not get distracted by those issues. Let's get on with the real issues that are facing people of this country right now, and I don't think that the president ought to resign at this point. We'll see how things go. But certainly those allegations are not new, and he was elected with those allegations front and center.

I'll just step in for a second here and posit that sexual misconduct allegations sound a lot like "real issues."

Twitter immediately began chiming in on Jones' response, and they were definitely not pleased with Jones suggesting that people "move on" from the allegations.

"We were all rooting for you!"

The public reception of Jones quickly turned from all the love to WTF.

Jones really got dragged for not referring to sexual misconduct as a "real issue."

It was especially surprising since sexual misconduct allegations against Roy Moore were at the forefront of the election he just won.

People didn't understand how he could so quickly forget the circumstances surrounding the Alabama Senate race.

Oh, and people reminded him about the 98 percent of black women who voted for Jones.

Disbelief and bewilderment were best expressed in GIF form.

"Such a slap in the face to women."

People really couldn't believe he would advocate to just "move on."

The Jones honeymoon period didn't even last a full week.

It was definitely "short lived."

Perhaps he should reprioritize his "real issues."

Perhaps the country was viewing Jones through rose-colored glasses.

Many people were turned off by Jones' response to Tapper's question regarding President Trump and the allegations of sexual misconduct leveled against him.

The kicker here, as mentioned by Jake Tapper, was questioning why Democratic Senator Al Franken should have resigned amidst the sexual harassment allegations against him, if the president remains untouched by his. Franken resigned from Congress in a speech on Dec. 7, and while Franken has apologized for some of the claims, he has also claimed that some of the allegations were untrue.

In his Dec. 7 speech, Franken also commented on the allegations against President Trump:

Of all people, am aware that there is some irony in the fact that I am leaving while a man who has bragged on tape about his history of sexual assault sits in the Oval Office.

Franken was referring to the vulgar Access Hollywood recording that was taken of Trump in 2005 and released to the public in October 2016 when Trump was a presidential candidate.

In the end, people were not pleased with Jones giving President Trump, the man who holds the highest political office in the country, a pass on the sexual misconduct allegations leveled against him, and a week filled with lauding the Democratic victor turned sour on a dime on Sunday morning.