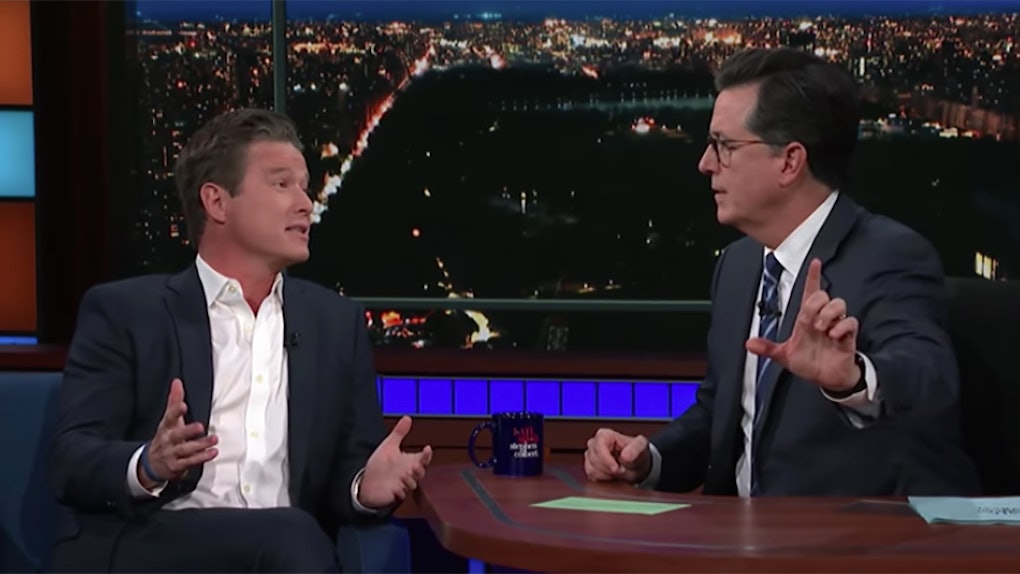 Billy Bush On Trump Reportedly Denying 'Access Hollywood' Tape: "That Is Your Voice, I Was There"

In an interview on The Late Show with Stephen Colbert, Billy Bush addressed Trump's reported denials about the Access Hollywood tape. The former TV host both rebutted against the idea that the footage was manipulated (and didn't feature Trump's actual voice) and talked about what he was thinking during the time the audio was being recorded in 2005. Bush's appearance on The Late Show, which came on Monday, Dec. 4, was his first on television since being fired by NBC after the Washington Post published the footage in October 2016 — a month before the presidential election.

The subject of Trump's view on the authenticity of the tape — which featured Trump using the words "grab "em by the p*ssy" — was the first subject Bush and Colbert discussed.

"By the way, I would also like to say that’s not me on the bus," Bush said sarcastically. "You don’t get to say that, because I was there and the last 14 months of my life I have been dealing with it. You dealt with it for 14 minutes and went on to be the president."

The reason why Bush was discussing the subject of whether or not Trump's voice on the Access Hollywood tape is real stems from a report from the New York Times that was published a week prior to Bush's interview.

According to theTimes, President Trump has questioned the authenticity of the tape during multiple private conversations since taking office in January. The Times' story was broken by multiple reporters, including Maggie Haberman, who has been first to multiple high-profile stories related to Trump's White House. Trump has not publicly stated that the tape isn't real.

"You can't say that. That is your voice," Bush told Colbert. "I was there; you were there."

The report of Trump's apparent doubts about the tape prompted Access Hollywood to provide an a response. "We wanted to clear something up that has been reported across the media landscape," host Natalie Morales told viewers during the Monday, Nov. 27 broadcast of the show. "Let us make this perfectly clear — the tape is very real. Remember his excuse at the time was 'locker-room talk.' He said every one of those words."

During Bush's appearance on The Late Show, he also explained how he perceived the 2005 conversation with Trump that the Access Hollywood tape portrays.

"Along with Donald Trump and me, there were seven other guys present on the bus at the time, and every single one of us assumed we were listening to a crass standup act," Bush said. "... If I had thought there was a man detailing a sexual assault strategy to me, I would have called the F.B.I., not just reported it to my executive producer. So you know, that was it for me."

Bush's interview with Colbert echoed an article he'd written for the opinion section of the New York Times, which published the article the morning of Bush's TV appearance.

"He said it. 'Grab ’em by the pussy.' Of course he said it. And we laughed along, without a single doubt that this was hypothetical hot air from America’s highest-rated bloviator," Bush wrote. "... Surely, we thought, none of this was real."

At the time that the Access Hollywood tape was filmed, Trump had been the star of NBC hit show The Apprentice. The eventual president's status at the network played a part in how the infamous conversation was received, Bush said.

"Yes, like I wrote in the Op-Ed, I think a lot of us were, the big word is 'complicit,' Bush told Colbert. "But everybody had to sort of kiss the ring a little bit of the Donald, because he was making so much money for NBC."

Bush has not been hired by a network since his firing from NBC.