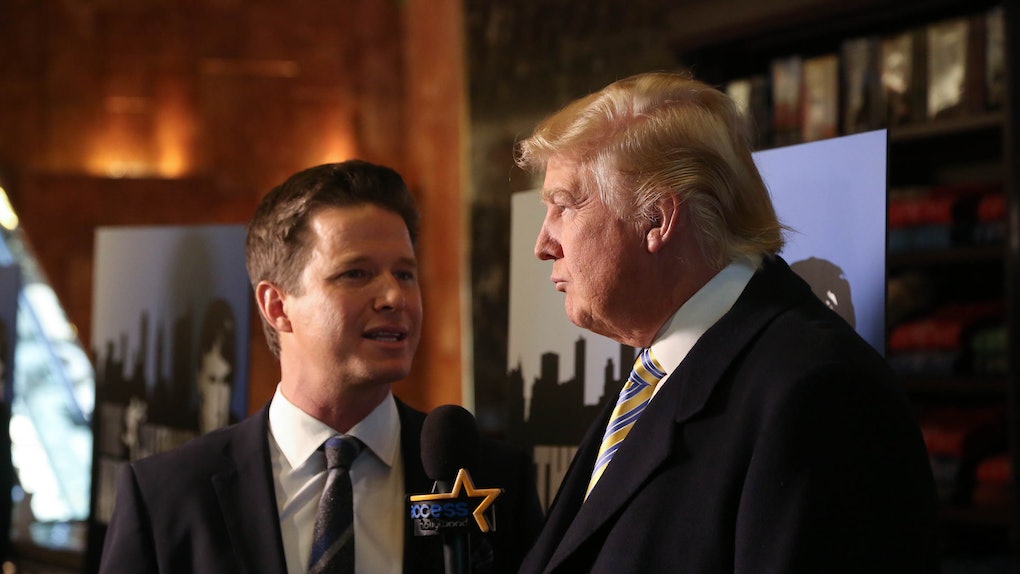 In the days after the release of a video tape in October 2016 that featured him talking about groping women on the set of NBC's Access Hollywood, then-candidate Donald Trump apologized to supporters. Now, over a year later, a new report says the president has suggested to multiple people that the tape isn't real at all. The show, however, went out of its way to combat any question of whether Trump's Access Hollywood is real.

"We wanted to clear something up that has been reported across the media landscape," host Natalie Morales told viewers during the Monday, Nov. 27 broadcast of the show. "Let us make this perfectly clear — the tape is very real. Remember his excuse at the time was 'locker-room talk.' He said every one of those words."

Actress Arianne Zucker, who was shown greeting Trump and host Billy Bush in the infamous 2005 Access Hollywood video, also pushed back on Monday night against Trump's reported suggestion that the tape isn't real.

"I don’t know how else that could be fake unless someone’s planting words in your mouth" Zucker told CNN's Anderson Cooper. "How do you apologize for something and renege on it? It’s puzzling to me."

During the presidential debate that followed the release of the tape, Trump did indeed apologize for what he was heard saying on the tape, labelling the conversation — as Access Hollywood host Morales mentioned — "locker room talk."

When Anderson Cooper, who was co-hosting the debate, asked Trump whether the candidate understands that he "bragged that you have sexually assaulted women," Trump pushed back.

Trump then went on to criticize both Hillary and Bill Clinton.

Following the release of the Access Hollywood tape, many women came forward with allegations of sexual misconduct by Trump. The White House's official stance is that those women are lying.

Nevertheless, in recent months, Trump has suggested to both a senator and an advisor that the infamous Access Hollywood tape was not real, the New York Times reported. In addition, the Times' Maggie Haberman reported during Monday night's airing of CNN's AC360 that Trump made a similar suggestion to a third person.

"Yes we stand by the reporting," Haberman told CNN. "What he said to this senator, earlier this year it was in January — was that he was looking into hiring people to ascertain whether it was his voice [on the Access Hollywood tape]."

During the White House's press briefing on Monday afternoon, Press Secretary Sarah Huckabee Sanders was asked about President Trump's position on the authenticity of the Access Hollywood tape. She responded by pointing to Trump's victory in the general election.

"The president addressed this, this was litigated and certainly answered during the election by the overwhelming support for the president and the fact he's sitting here in the Oval Office today," Sanders said.