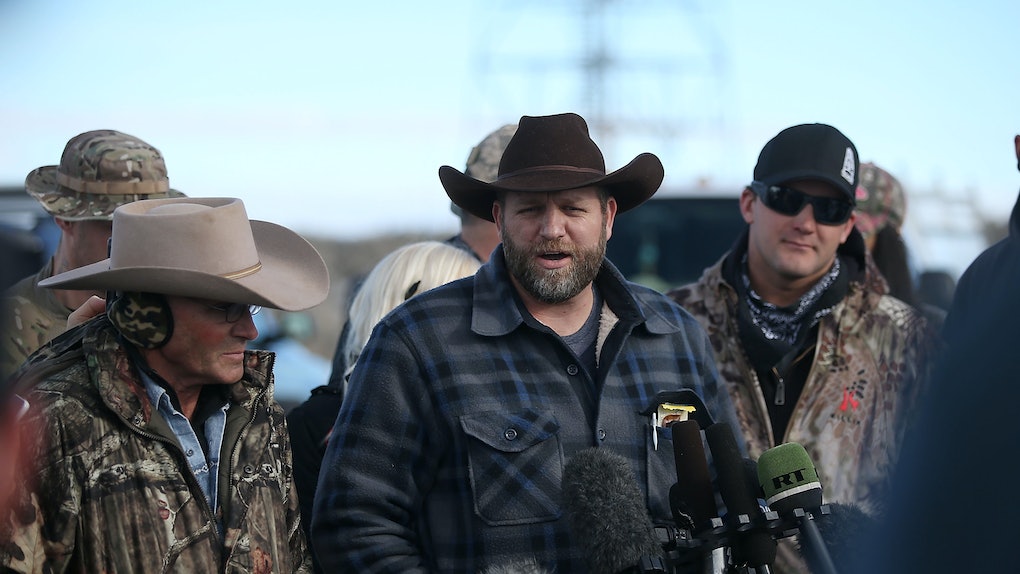 Trump's Pardon Of Oregon Ranchers Is Yet Another Famous Case

President Donald Trump has issued yet another pardon. On Tuesday, July 10, the White House announced that the president had given "executive grants of clemency" to the father and son duo of Dwight and Steven Hammond, who had been convicted of setting a series of fires to their own land, which then spread to government-owned land. Trump's pardon of the Oregon ranchers now represents yet another instance of the president extending his pardon power to a high profile case.

To date, Trump has either granted pardon or clemency to the likes of Alice Marie Johnson, the grandmother who had served over two decades in prison as part of a life sentence for a drug-related charge and attracted the attention of the president with the help of Kim Kardashian, and Dinesh D'Souza, the conservative filmmaker who pleaded guilty to violating federal campaign finance laws.

The Hammonds, for their part, had been convicted of a much more obscure crime. The father, Dwight, and son, Steven, are part of a prominent ranching family in the southeastern part Oregon. In June 2012, they were found guilty of intentionally setting fire to public land in two seperate cases, one in 2001 and the other in 2006, ostensibly to make the land conducive to cattle grazing.

A press release from the Department of Justice in 2015 describes the case and reads, "One witness testified that he barely escaped the eight to ten foot high flames caused by the arson. The fire consumed 139 acres of public land and destroyed all evidence of the game violations. After committing the arson, Steven Hammond called the BLM [Bureau of Land Management] office in Burns, Oregon and claimed the fire was started on Hammond property to burn off invasive species and had inadvertently burned onto public lands."

Following the Hammonds' conviction, they had initially been sentenced to months in jail. However, the Justice Department, under President Barack Obama, appealed the sentenced in 2015, three years after the initial trial, and successfully fought to impose a mandatory five-year sentence on the father and son.

"Congress sought to ensure that anyone who maliciously damages United States’ property by fire will serve at least 5 years in prison," the Justice Department's release read. "These sentences are intended to be long enough to deter those like the Hammonds who disregard the law and place fire fighters and others in jeopardy."

The Hammonds' case would gain more notoriety a year later, when a small militia seized a government-owned wildlife refuge in Oregon in protest of the Hammonds' conviction.

“These men came to Harney County claiming to be part of militia groups supporting local ranchers,” Sheriff David Ward said in a statement at the time, “when in reality these men had alternative motives, to attempt to overthrow the county and federal government in hopes to spark a movement across the United States.”

The Hammonds never endorsed the refuge takeover. Now, two years later, they have been granted pardon by the Trump administration, which says the Obama Justice Department was "overzealous" in pursuing a five-year sentence.

At the Hammonds’ original sentencing, the judge noted that they are respected in the community and that imposing the mandatory minimum, 5-year prison sentence would “shock the conscience” and be “grossly disproportionate to the severity” of their conduct. As a result, the judge imposed significantly lesser sentences. The previous administration, however, filed an overzealous appeal that resulted in the Hammonds being sentenced to five years in prison. This was unjust.

Among the other high profile pardons Trump had issued is one to Scooter Libby, the former White House staffer convicted of obstruction of justice while working during George W. Bush's tenure as president.

Now, another can be added to a list. Trump has pardoned the Hammonds, two ranchers whose imprisonment inspired a militia's takeover of a government facility.