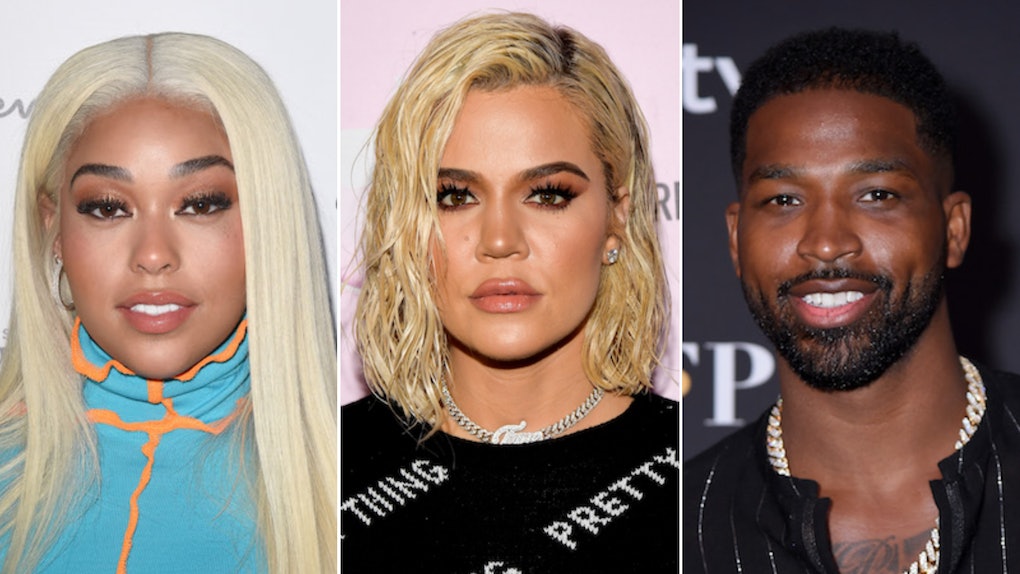 OK, guys. It's happened. The Keeping Up With The Kardashians episode featuring the Tristan Thompson and Jordyn Woods drama aired on Sunday, June 23, and I'm just wondering... how is everyone doing? After reports surfaced suggesting Thompson cheated on Khloé for the second time, fans have been at the edge of their seat waiting for the show to catch up to the real-life drama. Fans watched in wonder as the story unraveled. Specifically, Tristan Thompson's reaction to Khloe Kardashian confronting him about Jordyn was alarming. Elite Daily previously reached out to Kardashian, Thompson, and Woods' teams for comment on the reports but did not hear back by the time of publication.

The episode interspersed the Woods and Thompson news with Khloé's growing health concerns. The show began with Khloé describing debilitating migraines and incapacitating nausea, which resulted in her seeking out an MRI. In my totally unprofessional non-medical opinion, I sat at home shouting, "Stress!!! It must be stress!!!" because let's be clear — even though, up until February 2019, she and Thompson were working on their relationship, the show still touched on their fluctuating trust issues ever since he was caught kissing multiple women during Khloé's pregnancy with baby True. Fortunately, the MRI came back clear.

I wish I could say the same for Khloé's conversation with Woods, but that seemed to be anything but clear.

In the beginning, Khloé told her sisters that she spoke with Woods the day after she reportedly spent the night partying with Thompson at a house he rented to party at with friends during All-Star Weekend. According to Khloé, Woods claimed Thompson was trying to kiss her but she couldn't remember if they did or did not. Later, Khloé claimed Woods told her that they did make out. (It's worth noting that we never actually heard Woods giving her side of the story, but rather a filtered version of her conversation with Kardashian, and that, after the cheating reports hit the media, Woods went on Jada Pinkett Smith's talk show Red Table Talk and claimed that Thompson followed her on her way out of the party where he then kissed her.)

Stunned fans watched as Kim orchestrated a sisters conference call for the history books to get to the bottom of the reports. Kourtney, Kylie, Kendall, Khloé, and Kim spoke in a flurry of emotion as they corroborated stories and swapped details. In the end, reports told fans Khloé reportedly broke up with Thompson and Woods moved out of Kylie's home. However, in the episode, fans also heard a little bit about Thompson's reaction to Khloé learning about his reported night with Woods.

In one tense scene, Khloé tells Scott Disick and her sister Kourtney that Thompson was reportedly discussing hurting himself via text message. While she mentioned that she was avoiding talking to Thompson directly, she did ask one of his friends to check on him. Cameras recorded Khloé's phone conversation with Thompson's friend who claimed he locked himself in a room and refused to open the door. When Khloé asked the friend if he thought Thompson was going to hurt himself, the friend responded, "I don't know." Elite Daily reached out to Thompson's team for comment on the claim but did not hear back by the time of publication.

The episode ended with Khloé powering through a contractual obligation she made prior to the scandal and a truly intense teaser for the second part of the season finale.

For now, all KUWTK fans can do is continue to watch and wait to see how this continues to unfold.

If you or someone you know is experiencing suicidal thoughts, call the National Suicide Prevention Hotline at 1-800-273-8255 or text HOME to the Crisis Text Line at 741741.