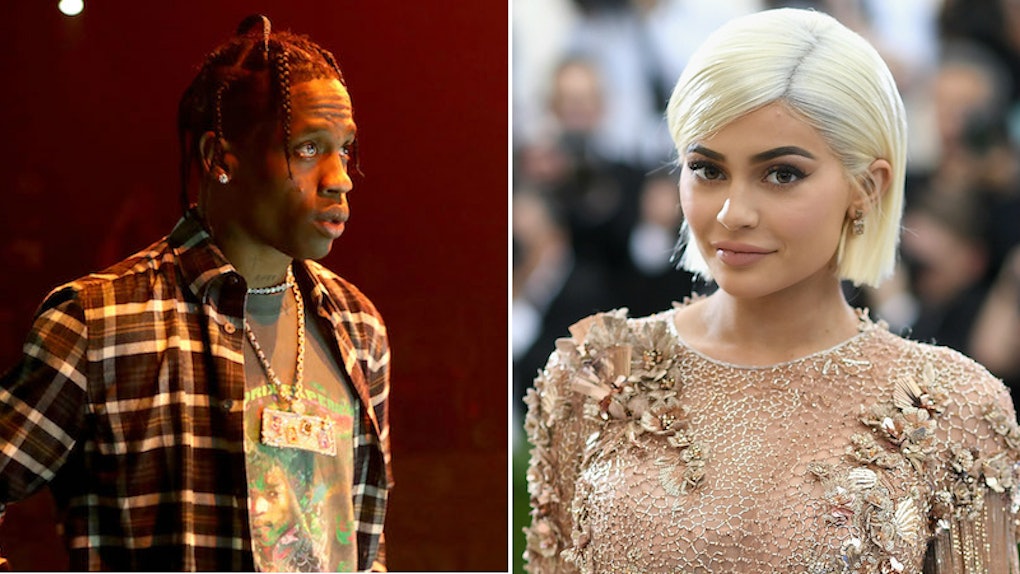 Little by little, fans are getting a glimpse at what an adorable baby Kylie Jenner and Travis Scott have made. Back on Feb. 1, Jenner gave birth to the couple's first daughter, Stormi Webster. Jenner announced the news on her Instagram and followed up with a beautiful (and emotional) YouTube video chronicling her nine-month pregnancy. In one of the final shots, fans got to see a tiny sliver of the newborn baby's body. And soon after Stormi's birth, we also got a blurry image of her face with her hand holding tight onto her mom's. Travis Scott's photo of Stormi Webster on Thursday, March 1, showed even more of the tiny tot, and the sweater she's wearing in the pic is so cute, it will literally make you sob.

On Feb. 4, Kylie Jenner announced she gave birth to Stormi Webster in a lengthy Instagram post. She wrote,

Jenner quickly followed up with a link to her YouTube video, entitled "To Our Daughter." In it, we see Jenner and Scott through the months of her pregnancy, and even see baby Stormi at the end. Honestly, it's beautiful. I've watched it like 87 times, and I'm not ashamed.

On the one-month anniversary of Stormi's birth (March 1), Travis Scott took to Snapchat to share an adorable picture of his daughter. The photo shows Stormi wearing a pink sweater with a red heart on it and the word "DADDY" written inside. His caption read, "My lil mama 1 month today her favorite unit of course." DYING. SO CUTE.

While Jenner has posted photos of Stormi before (including a blurry face photo and a Snapchat of her tiny, tiny toes), this is the first photo of Stormi we've gotten from Scott.

Earlier this week on Feb. 28, Scott posted another photo to his Snapchat. It showed him on the road with the caption, "Otw mama."

If you're wondering where Scott was "on the way" from, it's possible he was traveling from a show to reunite with his girlfriend and daughter. But, Scott also isn't living with Kylie Jenner despite them having a child together. No worries, though. Nothing is wrong, they're just taking things slow. A source told People,

Kylie and Travis are not officially living together. He has his own place. They are co-parenting though, and things are going great. They are together and happy.

The source also said that Scott is "very sweet with his daughter," which is so apparent in his latest Snapchat pic.

Regardless of their setup, it's clear both parents have such a love for newborn baby Stormi. All the best to the family of three – and keep the adorable pics comin'.