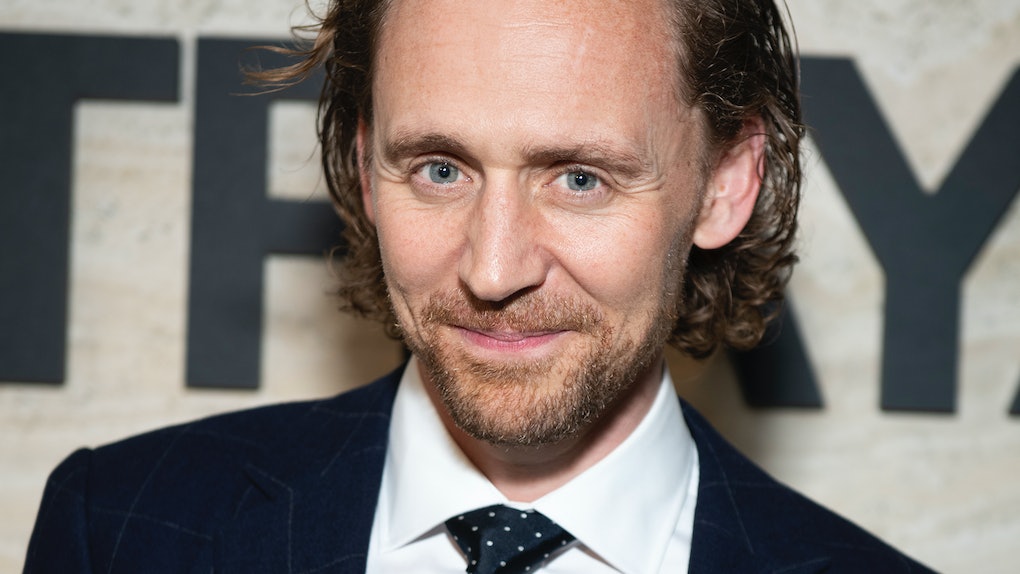 Just like his Marvel Cinematic Universe character Loki, Tom Hiddleston loves to keep fans guessing. From his very public fling with Taylor Swift to his super-private romance with his rumored girlfriend, Zawe Ashton, Tom Hiddleston's relationship history is a complete enigma... and I'm pretty sure he likes it that way. With the highly-anticipated premiere of the Disney+ series Loki coming up, fans are more curious than ever about the British actor's dating life, and here's the one thing I know for sure: Hiddleston definitely has a thing for co-stars.

Currently, Hiddleston is rumored to be dating his co-star from the 2019 West End production of Betrayal, and though he and Ashton have yet to open up about their maybe-relationship, things seem to be getting serious. In July 2020, a source for The Sun reportedly claimed the two were living together in Atlanta, Georgia, but following Hiddleston's whirlwind romance with Swift, he reportedly wants to keep things with Ashton on the low-down. "He is so paranoid about his private life since his relationship with Taylor that he has gone to great lengths to keep this under wraps," another source for The Sun reportedly claimed. Fair enough.

Here's what I do know about Hiddleston's enigmatic dating history.

Hiddleston's first major relationship in the spotlight was with his Wallander co-star Susannah Fielding. The two reportedly began dating in 2008, and after more than three years together, the pair decided to go their separate ways in November 2011.

"The fact is we've split up. The relationship ran its course," Hiddleston told the Daily Mail in February 2012. "People assumed it was about me getting well-known and leaving her behind. But she is a very talented actress and has lots of projects coming up. It's just I am very driven right now and there isn't really any time to have a proper girlfriend."

While filming Thor back in 2010, Hiddleston reportedly hit it off with his co-star Kat Dennings, and they raised eyebrows when they were reportedly spotted looking cozy at Comic-Con in July that year, per Entertainment Tonight. However, since Hiddleston was reportedly still dating Fielding at the time, it's unlikely anything ever happened between the two. Neither actor has ever commented on the rumored fling.

Despite telling InStyle she had a "no actor" dating policy, reports emerged claiming Jessica Chastin was dating Hiddleston in January 2014. "Tom is taken with Jess and it's serious," an insider for Metro reportedly claimed at the time. "Before Christmas she visited Britain to stay with him and meet all his family for the first time." However, little else was heard about the rumored romance after that.

Hiddleston and Chastin went on to star in 2015's Crimson Peak, and when asked by the M what she found sexiest about her co-star in October 2015, she said, "What is the most sexy thing about Tom? It is hard for me to say, because I see him as a friend, but I think it is his voice. He has such a lovely accent, doesn't he?" Whether these two dated or not, they seem to be tight.

In July 2013, Hiddleston raised eyebrows when he attended the 2013 Wimbledon Championships with Jane Arthy, a music producer with whom he reportedly looked cozy. Fans became even more suspicious after Elle UK's former editor-in-chief Lorraine Candy tweeted, "I sat next to actor Tom Hiddlestone and his girlfriend Jane #wimbledonfinal. He's a very funny man."

When asked about the rumored relationship by GQ in October 2013, Hiddleston played it coy. "I understand the curiosity," he said. "One day I hope when there's really something to write home about, then I'll be able to talk." Nothing else was heard about the maybe-couple after that.

After co-starring in 2015's I Saw The Light, Hiddleston reportedly started up a romance with fellow MCU member Elizabeth Olsen. Reports emerged about their rumored relationship in May 2015, with a source for Us Weekly reportedly claiming they were "hooking up" and it was "casual." By July, Olsen and Hiddleston reportedly got legit. "They've been talking constantly. It's been good for the both of them. They really care for each other," an insider for Us Weekly reportedly claimed at the time. "Neither of them are looking to jump into a large commitment, but it's getting more serious."

According to Star magazine, the two reportedly decided to end things towards the end of 2015. "Elizabeth's so focused on her career," a source for the magazine reportedly claimed, per Classicalite. "She wasn't sure she could handle a serious relationship right now." Though Olsen never confirmed their romance, she did call Hiddleston "an incredible person" during a March 2016 interview with Entertainment Tonight, so apparently, there's no drama to see here.

Dating rumors first began circulating about Hiddleston and Swift in May 2016, when the two were spotted dancing at the Met Gala. Not long after, Swift split from her then-boyfriend Calvin Harris, and she and Hiddleston embarked on a whirlwind romance. Though some fans thought the relationship was just a PR stunt (especially after Hiddleston wore that iconic "I HEART T.S." tank top), Hiddleston told The Hollywood Reporter they were the real deal in July 2016. "Look, the truth is that Taylor Swift and I are together and we're very happy," he said. "Thanks for asking. That's the truth. It's not a publicity stunt."

The couple reportedly called it quits in September 2016, but afterwards, Hiddleston had nothing but good things to say about his ex. During a February 2017 interview with GQ, he gushed, "Taylor is an amazing woman. She's generous and kind and lovely, and we had the best time… Of course it was real."

After working together on Betrayal, Hiddleston and Ashton reportedly began dating in February 2019, though news of their relationship didn't emerge until September of that year. "Tom really has fallen for Zawe in a big way. They've actually been together for more than six months," a source for The Sun reportedly claimed at the time.

The maybe-couple is reportedly still together, and with Ashton set to play a villain in Captain Marvel 2, these two may just become the latest MCU actors to date IRL.

Hiddleston probably won't step out wearing an "I Heart Z.A." tank top anytime soon, but here's hoping fans learn something about Hiddleston and Ashton's maybe-relationship in the future.