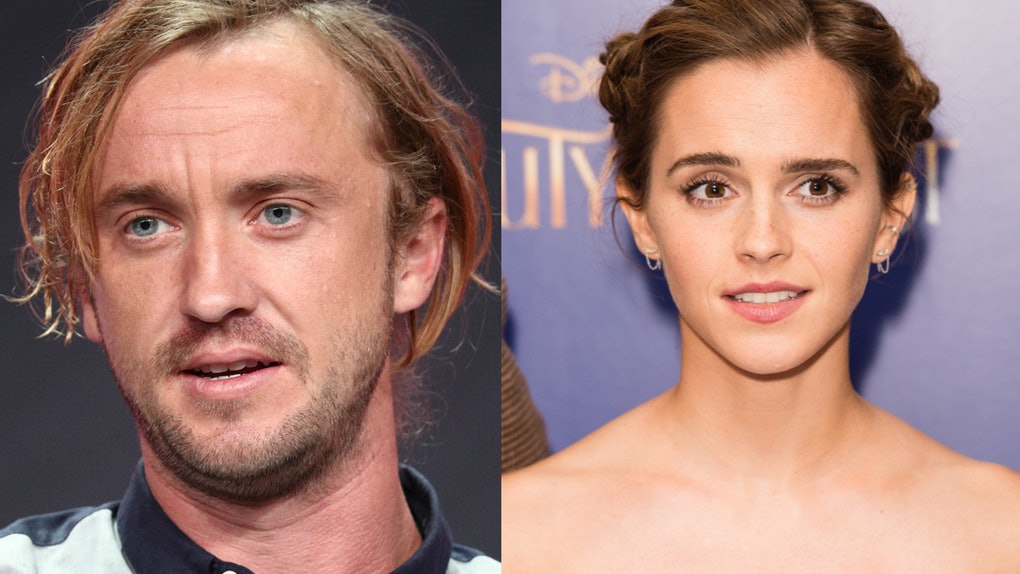 I should preface this by saying that I have no idea if these two Hogwarts grads are actually in a relationship. I'm also fresh out of Veritaserum, so I can't coax the truth out of them with a magic potion. However, I can still use Tom Felton and Emma Watson's zodiac signs to hypothesize whether or not Dramione is really meant to be. Professor Trelawney unfortunately did not reply to my request for assistance with this matter, but based on my own astrological knowledge, I'm sorry to say that these two are probably better off as friends.

Watson's was born on April 15, which makes her an Aries, while Felton's Sept. 22 birthday makes him a Virgo. While Aries and Virgos both have a strong sense of responsibility and are known for being hard workers, a romantic relationship that progresses between these two usually leads to major compatibility issues. Just as a relationship between a Gryffindor and a Slytherin is possible, but not likely, pairing fiery Aries and a closed-off Virgo is more likely to end in heartbreak than it is in a happily-ever-after. Sorry, Hermione. I think there's a reason why J. K. Rowling paired you with Ron instead of Draco.

Anyone familiar with Watson knows that she is an outspoken feminist queen who never hesitates to share her ideas and promote discourse. And that makes sense — those born under the sign of the ram are known for being energetic, independent, and strong-willed. As a fire sign, Aries have an infinite zest for life and aren't afraid to pursue what they want (so, basically, all Aries are Hermione Grangers). When it comes to love connections, an Aries cannot be with someone who is timid or complacent. They need someone who can match their power and drive or they'll simply grow bored with the relationship.

Now I'm not saying that Felton isn't ambitious, but it's hard to match the force of nature that is Watson. It's clear that she has had some influence on the actor — soon after posting the picture of their guitar lesson, he shared a photo of himself sitting cross-legged on a beach wearing a a "Women Do It Better" T-shirt, with photo credit given to "EW" (though I'm pretty sure I could have figured out who staged this photoshoot without him giving photo cred). However, Watson would probably agree that being an agent for change requites more than sporting a T-shirt.

Those born under the sign of Virgo may be just as energetic and sharp as Aries, but they also tend a hard time when it comes to expressing their emotions. While Watson is always emphatic and impassioned, Felton tends to be a man of few words when it comes to both interviews and his social media presence. Virgo is primarily an intellectual sign, prone to analytical thinking (and sometimes over-analysis), and an Aries is more likely to wear their heart on their sleeve. These differences in self-expression tend to pose a problem when it comes to establishing an emotional connection.

Despite both valuing industriousness and ambition, Aries and Virgos don't tend to see eye-to-eye when it comes to other values. Virgos hold intelligence and logical reasoning in high esteem, while an Aries believes that bravery is a greater impetus for progress than smarts. Basically, Watson is a total Gryffindor, while Felton may be a better fit for Ravenclaw IRL. Just as there is a big difference between wearing a T-shirt with a feminist slogan and campaigning for equal rights, there's a difference between knowing what is right and doing what is right. A Virgo is more likely to admire initiative, while an Aries is more likely to take it.

As much as I ship Dramione, I think that their lack of astrological compatibility makes them a better fit as friends than lovers. Don't get me wrong, Tom — you're great, but Emma doesn't have any time for a person who isn't ready to tirelessly crush the patriarchy with her.