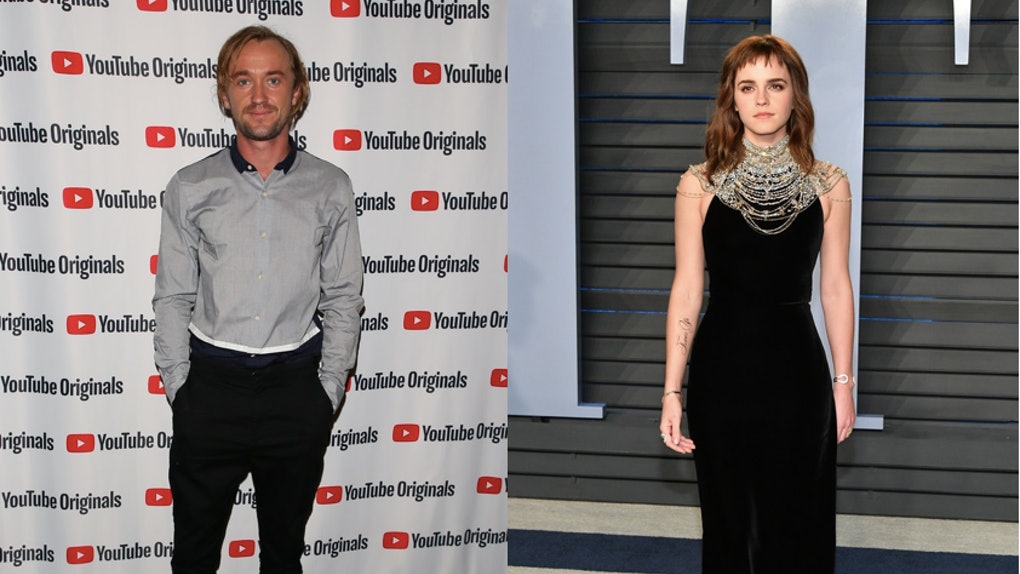 Though I'm sure someone has written fan fiction at some point exploring the possibility of a hot magical hookup between these two, I think most people can agree that Harry Potter's Hermione Granger and Draco Malfoy don't make for the most compatible couple. Once you call someone a Mudblood and then receive a punch in the face in response, any chance of a romance is kind of dead in the water. But believe it or not, the actress who played Hermione used to crush on the actor who played Draco, and Emma Watson's quote about her crush on Tom Felton will seriously Wingardium Leviosa your heart.

During an appearance on The Jonathan Ross Show back in 2012 (which was soon after the release of the final film, Harry Potter and the Deathly Hallows: Part 2), Ross asked whether Watson ever "got off" with any of the men on set. After laughing at his turn of phrase and its implications, Watson said, "The whole 10-year period, I never so much as pecked either one of them (Rupert Grint or Daniel Radcliffe) on the cheek. It was pure friendship." But when Ross teasingly brought up Draco, Watson couldn't help but admit to being a bit under Felton's spell.

"Between the ages of 10 and 12 I had a really terrible crush on Tom Felton," she confessed to Ross. "We love a bad guy, and he was a few years older and he had a skateboard and that just did it really. He used to do tricks on it. He was so cool. He totally knew [I had a crush]. And the thing is, he’d turn and go, ‘Oh, I see her in a younger sisterly way.’ And it just broke my heart, still does.” Um, same, girl, which is why these relationship rumors about Watson and Felton are giving me way too much hope.

If you haven't gotten the news from your owl yet (or, you know, just checked Instagram), Felton posted a pic on Instagram on Aug. 19 of the two of them in South Africa together. Where Felton was giving Watson guitar lessons. Looking freshly showered. And both of them were dressed in pajamas. "Quick learner x," Felton captioned the photo. Um, hi, does anyone have any extendable ears and a time turner I can borrow real quick so I can eavesdrop on this devastatingly adorable (and scandalously intimate) music lesson?

The next day, Felton posted a picture of himself sitting cross-legged on the beach wearing a "Women Do It Better" T-shirt, with photo credit given to "EW," but honestly, no photo cred was really needed, because that T-shirt slogan basically screams "Emma Watson."

This wasn't even the first time that these two gifted the world with a photo of themselves together, but Watson always seems to make a point to emphasize that they are just friends. In November 2018, Watson posted a smiley selfie on the two of them on the beach, where she promoted Felton's new YouTube original sci-fi series Origin and said, "Congrats dear friend." Then, in February 2019, she shared a solo shot and gave photo credit to Felton, captioning the pic, "Friends capture you best." OK, enough with this 'friends' business, Emma. Is Dramione a thing or not?

In any case, if anyone wants to sign my petition to have J.K. Rowling edit the Harry Potter and the Deathly Hallows epilogue so that Hermione and Draco end up together, LMK.