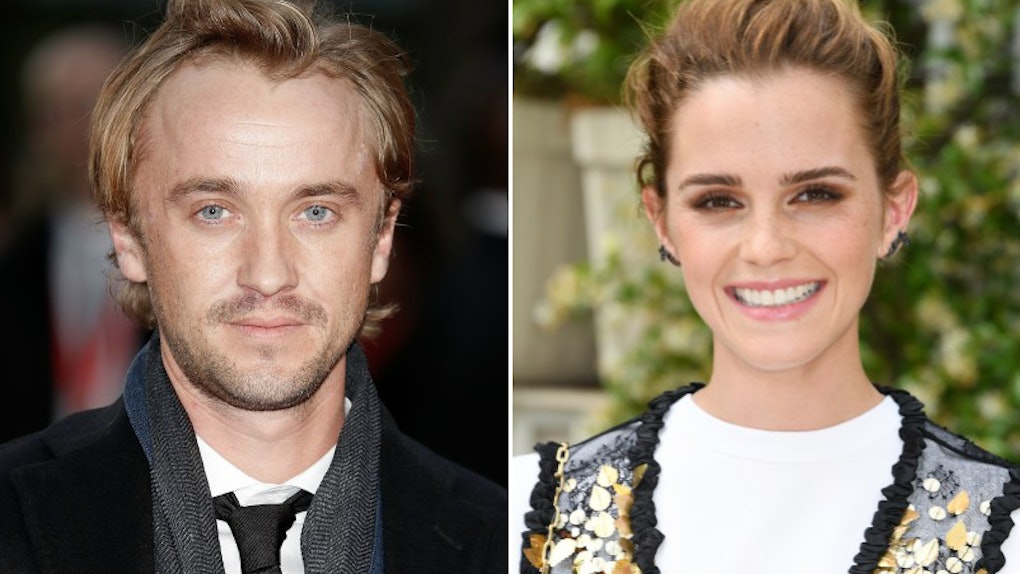 Tom Felton's Photo Of Emma Watson Is So Sweet, It'll Give You All The 'Harry Potter' Feels

All right, all you Potterheads, it’s time to let nostalgia take over because Emma Watson just posted the sweetest photo. And it was taken by none other than her Harry Potter co-star Tom Felton! The photo Watson shared on Instagram shows her sitting in a truck wearing a hat and looking at the camera. In the caption of the photo, Watson revealed that Felton had taken the photo. Tom Felton’s photo of Emma Watson is beyond adorable!

The photo that Watson shared on Sunday, Feb. 17, totally captures the sweetness of her longstanding friendship with Felton. She even said in her caption that friends like Felton are the best people to take portraits such as the one she shared.

And when you look at the photo, it’s hard to deny that Watson looks amazing. She looks happy and relaxed, and you kind of get the sense that what Felton captured in the photo is the true Emma Watson. She’s not posed or made up like you can usually expect of a Hollywood star at all, so it’s nice to see her in this laid-back, casual light.

All in all, the photo is really lovely and showcases Felton’s talent for photography, for sure. If you haven’t seen it yet, here’s a look:

This isn’t the first time Watson has shared photos and details about her friendship with Felton. Back in November 2018, Watson shared a photo of Felton and herself having a laugh on the beach. And that photo gives off the same vibe as the one she shared on Sunday. In the photo, you can definitely see that they share a very close friendship which goes all the way back to their Harry Potter days.

“🌴🤡 Tom’s @origin_series is out on 14th November. Congrats dear friend. #TFToleratingmysubparskatingskillssince1999,” Watson wrote in the caption of the post.

So, not only do they have a lot of laughs together, but they also support each other 100 percent! So sweet!

Here’s a look at that photo:

All in all, it seems like Felton and Watson share a solid friendship. But it wasn’t always quite that way. Back in 2011, Watson revealed to Seventeen that she had a crush on Felton when they first started working on Harry Potter.

"For the first two movies, I had a huge crush on Tom Felton. He was my first crush," she said. "He totally knows. We talked about it — we still laugh about it. We are really good friends now, and that's cool."

Sadly, the feelings weren’t mutual. In his own interview with Seventeen, Felton revealed that he didn’t have a crush on Watson and he didn’t even know that she had a crush on him at the time.

"No," Felton said when Seventeen asked if he knew about Watson’s crush. The question also prompted him to burst into laughter. "Sorry, I'm being a bit aloof with my answers."

Well, even though nothing came of that crush, at least both actors have been able to enjoy a long-lasting friendship!

More like this
Prince Harry Looks Like Prince Philip Did In This Photo From The '50s & It's Wild
By Michele Mendez
Lizzo's TikTok About DMing Chris Evans On Instagram Is Truly Hilarious
By Abby Monteil
Why Did Addison Rae Deactivate Her Twitter? Fans Think This Is The Reason
By Brandy Robidoux
Stay up to date