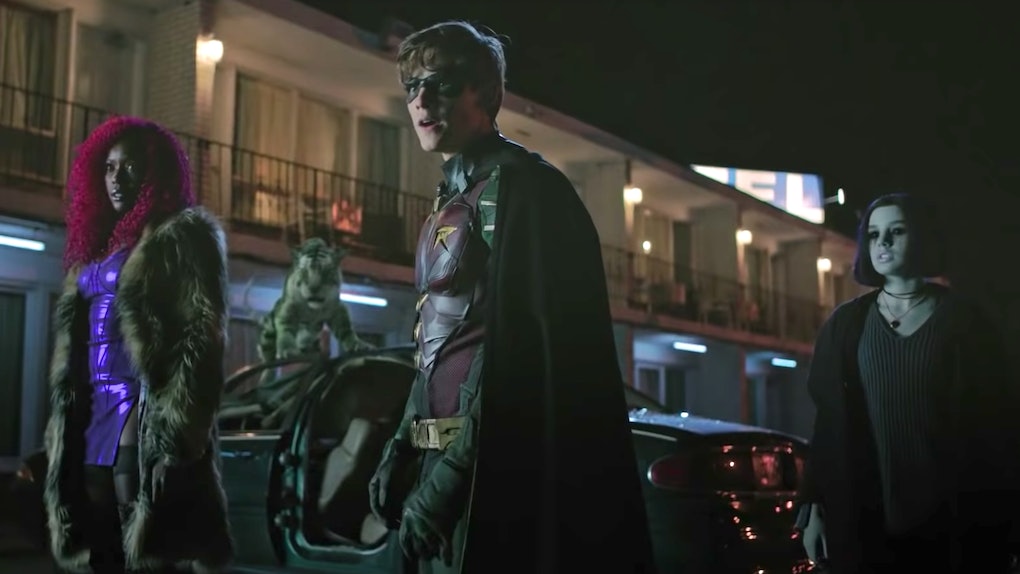 'Titans' Has Already Been Renewed For Season 2, So You Know Season 1 Will Be Good

DC's live-action Teen Titans adaptation has not even premiered yet, but the superhero studio is already assuring fans that it will not be a one-hit wonder. The premiere episode of Titans was screened at New York Comic-Con on Wednesday, and it came with a pretty big announcement: Titans has already been renewed for Season 2. So, if you wind up loving Titans when it premieres in a few days, then you do not have to worry about the possibility of it getting canceled.

Titans will be the first major live-action imagining of the popular DC Comics superhero team the Teen Titans, and the fact that it is live-action is not the only thing that will make Titans so drastically different from how fans have seen the Teen Titans before. Most famously, the Teen Titans have been adapted into animated series directed at young audiences — first for The WB in 2003 and currently as the even younger-skewing Teen Titans Go! for Cartoon Network. Titans, however, is being hailed as the first R-rated mainstream superhero series. The show's first trailer hit that point hard, featuring incredibly graphic fight scenes, gore, and even a choice expletive from Robin.

The new show is also the flagship original series for DC's recently-released streaming service, DC Universe, and an early second-season pickup like this shows just how much stock the new service is placing in Titans. And as the show's executive producer Akiva Goldsman revealed to ComicBook.com, the Titans creative team has actually already planned out a second season... and even a third season after that:

In early days we kind of grossly discussed the first three seasons just in very large blocks, and obviously with serialized television, what's great these days is you can do setups and payoffs at least within the season, and there are also some that we hope will be able to pay off next season.

That sure sounds promising. Along with the pickup announcement, Titans also unveiled a brand new trailer for the series, showing all the Teen Titans meeting up with one another and finding out about Raven's evil parentage, which seems like it will be central to the plot of Season 1:

Along with introducing live-action versions of the Teen Titans into the DC Entertainment Universe, Titans will also contain a backdoor pilot for the upcoming DC Universe series Doom Patrol. Based on the DC Comics superhero team of the same name, Doom Patrol will star Brendan Fraser, Matt Bomer, Diane Guerrero, Alan Tudyk, and more, and is expected to premiere at some point in 2019. However, first, the heroes will be introduced in the fifth episode of Titans.

Titans stars Brenton Thwaites as Robin, Anna Diop as Starfire, Ryan Potter as Beast Boy, and Teagan Croft as Raven, along with Minka Kelly and Alan Ritchson recurring as the Titans' allies Dove and Hawk. Although other adaptations of the Teen Titans included Cyborg as the team's fifth member, Titans seems to have no plans to bring Cyborg in at this time. Ray Fisher currently portrays Cyborg in the DC Entertainment Universe on the big screen.

Look for Titans to premiere on DC Universe on Friday, Oct. 12.

More like this
Netflix Renewed 'Bridgerton' For Seasons 3 & 4, Likely With More To Come
By Ani Bundel
These Tweets About Regé-Jean Page Leaving 'Bridgerton' Are Royal Bummers
By Cianna Garrison
5 Facts About Courtney From 'The Circle' Season 2
By Dylan Kickham
Stay up to date