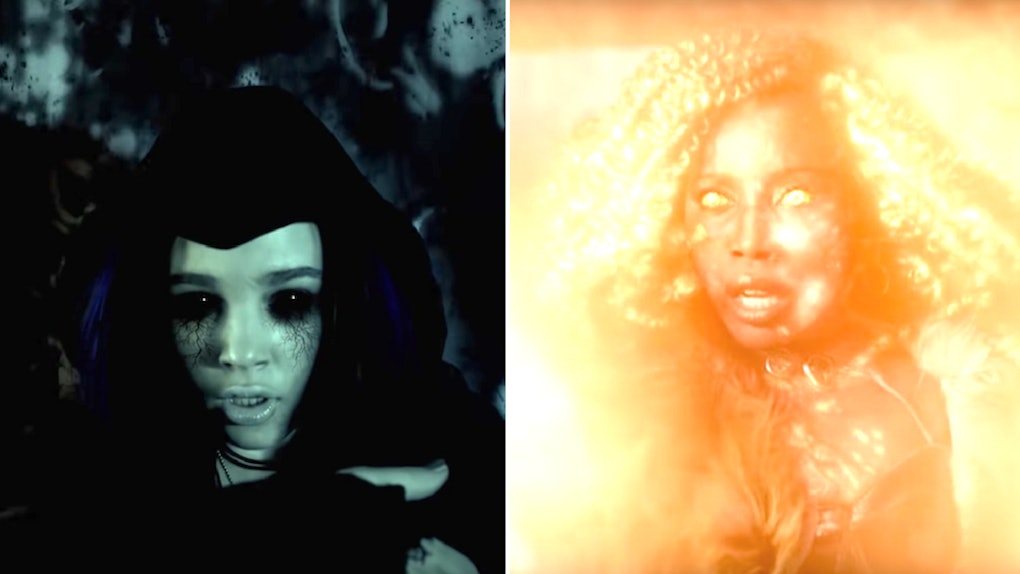 These definitely are not the Teen Titans you grew up watching during your Saturday morning cartoons. The first trailer for DC's Titans just dropped, giving fans their first look at the live-action adaptation of the DC Comics superheroes the Teen Titans. And the most shocking part of the trailer may come in its very first second: The clip has a TV-MA rating, citing explicit language, adult themes, and violence. Sure enough, the blood-filled Titans trailer definitely indicates that the upcoming series will not be for children.

To most TV fans, the DC Comics superhero team Teen Titans is probably best known for the animated series Teen Titans, which aired on Cartoon Network from 2003 to 2006. The cartoon followed Robin, Raven, Cyborg, Beast Boy, and Starfire as they fought crime, and although that basic premise remains pretty much the same in Titans, the new live-action adaptation of the superhero team promises to be a whole lot darker and more violent. The first Titans trailer does not hold back any of the new show's gritty and explicit aesthetic, which reaches its peak when we see Robin slaughter a group of men by shooting them with a gun and stomping their heads, before irreverently muttering "F— Batman." I guess we shouldn't call him a sidekick anymore!

Check out the gory new Titans trailer below:

The first-look clip also gives fans a look at Raven, Starfire, and Beast Boy. Notably absent is Cyborg, which is likely to avoid continuity issues — the DC Cinematic Universe is currently using Cyborg on the big-screen, having recently been portrayed by Ray Fisher in Justice League. Robin and Raven seem to be at the heart of Titans, with the trailer mostly focusing on Raven finding detective Dick Grayson and asking him to help her with something. The two heroes will join up with the alien princess Starfire and the green-skinned shapeshifter Beast Boy to form the Titans and stop a plot that threatens the planet.

It looks like a major theme of the show will be "inner demons," both literally and figuratively. Raven is struggling to control the demonic energy within her, while Robin has a flashback to his parents dying during a circus stunt gone wrong. The character notes also tease that Beast Boy's powers in the show developed as the side effect of an antidote to a lethal disease he had.

The trailer also gives us some quick glimpses at Hawk and Dove, two crimefighters whose skill-sets perfectly complement one another. Hawk and Dove are also dating each other in the series, and will be recurring characters in Titans. The series will also feature members of the superhero group Doom Patrol, comprised on Titans of Chief, Elasti-Woman, Robotman, and Negative Man.

Titans is set to be the first original series to air on DC Entertainment's upcoming streaming service DC Universe. The new network is also working on the Titans spinoff Doom Patrol, which will premiere in 2019 alongside its other planned original releases: Swamp Thing, Harley Quinn, and Young Justice: Outsiders. But first up is Titans, which is set to premiere sometime this fall when DC Universe goes live.