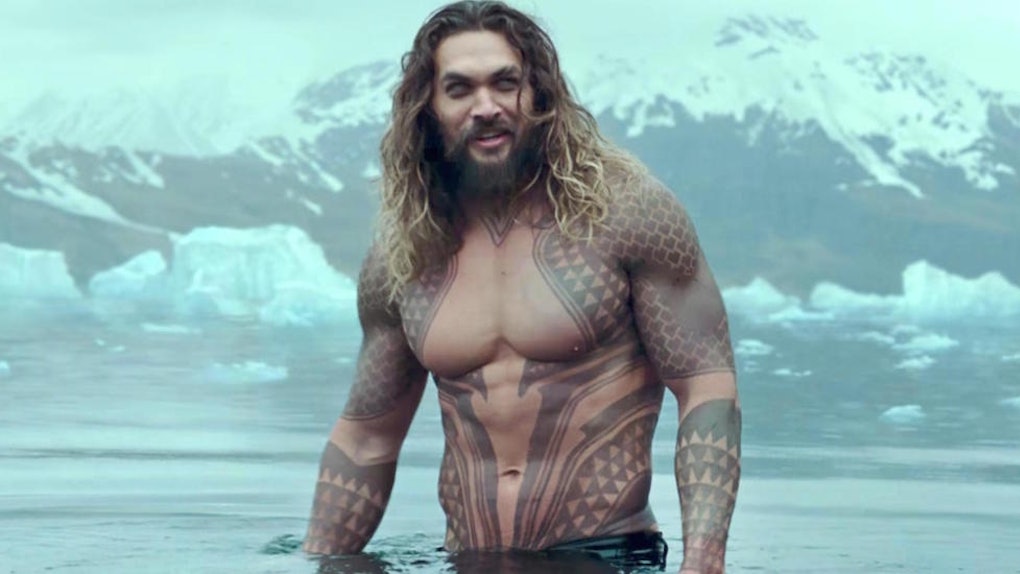 Sadly, Khal Drogo never got to meet his Khaleesi's dragons on Game of Thrones, but Jason Momoa is getting another chance to handle dragons in Aquaman. Yep — Aquaman is going to have dragons in it, Entertainment Weekly has revealed, and that is a pretty unexpected addition to the DC Extended Universe of movies. I guess Khal Drogo just couldn't let Daenerys have all the giant-lizard fun.

Fans can expect to see a whole lot more of the underwater world in Aquaman than the short glimpse that we got from last year's Justice League. Not only will the new movie introduce us to the entire city of Atlantis and its water-breathing inhabitants, but it will also feature massive, fearsome dragons. These new dragons are not exactly like the ones from Jason Momoa previous dragon-centric project — unlike the flying, fire-breathing dragons on Game of Thrones, the Aquaman dragons will be (fittingly) entirely aquatic, equipped with fins and gills to live underwater alongside the Atlanteans.

The sea dragons are actually based on seahorses, which were famously used as underwater transportation for Aquaman in his past appearances in DC Comics books and cartoons. But of course, the big-budget, live-action adaptation of Aquaman was not going to show Jason Momoa riding around on a seahorse, so the production team came up with a more badass version, transforming the seahorse into a massive water dragon. Entertainment Weekly shared the first photos of the sea dragons from Aquaman: Check them out here.

Yeah, that is definitely more intimidating than the seahorses we've seen Aquaman ride on in earlier appearances. Compare that dragon to the seahorse Aquaman rode in his 1960's cartoon series:

Producer Peter Safran revealed even more details about how these sea dragons will play into Aquaman. The dragons belong to the Xebel tribe, one of Atlantis' seven kingdoms. The Xebellian people will play a major part in Aquaman, seeing as Mera (Amber Heard) is a warrior for the tribe and the daughter of its ruler, King Nereus (Dolph Lundgren). Though the dragons are Xebellian, Safran teased that Aquaman will probably ride one during the movie.

The idea was to turn on its head the idea of Aquaman riding a seahorse, take something for which he was mocked and turn it into something terrifying and impressive. He’s a Xebellian creature but I wouldn’t be surprised if we saw Arthur (Jason Momoa) on one at some point…

The addition of these badass dragons is one of the few ways that the new Aquaman movie will build on the aquatic superhero's past appearances. One of the most resounding fan complaints about Arthur Curry in Justice League was that he was shown to be unable to speak underwater, needing Mera to create an air pocket before they could have a conversation. Thankfully, director James Wan has confirmed that the Atlanteans will speak freely underwater in Aquaman, so we don't have to watch Mera make an air bubble before every bit of dialogue.