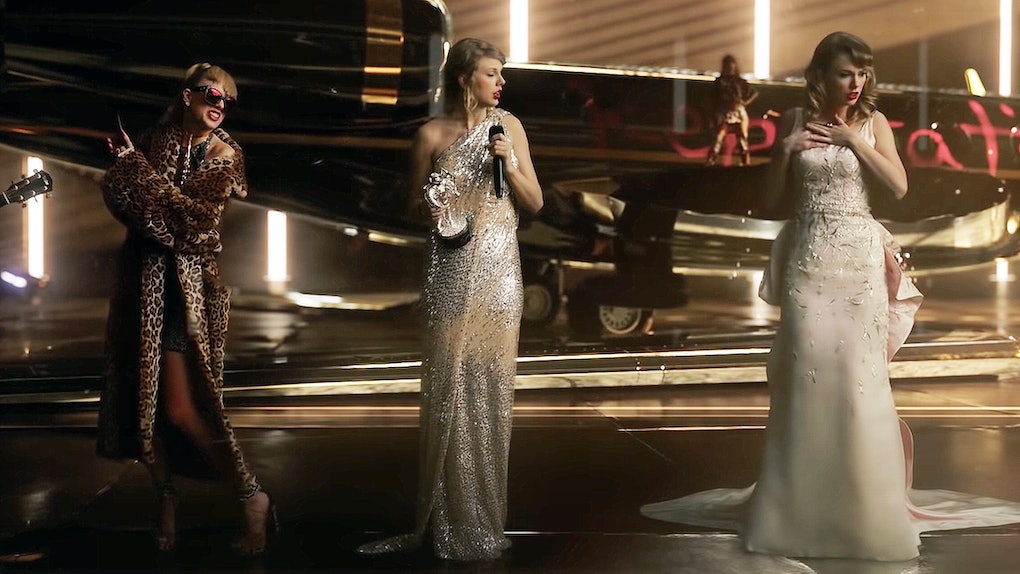 Who knew Taylor Swift rereleasing her album Fearless would bring back so many memories? Listening to songs like "Love Story" and "Forever & Always" all over again really takes you on a trip down memory lane, which is why so many fans are partaking in TikTok's Taylor Swift era trend. Using a sound created by TikToker @juliiianne that mashes up songs from every T. Swift album, users are showing off what they looked at the time each album was released.

This super adorable trend not only shows off some amazing fashion from 2006 onward, but it really showcases how long the Swift fandom has been going on. If you're a nostalgic Swiftie, you might want to try this trend out for yourself. All you need to do is some deep diving into old throwback pics. Start with 2006, when Swift's self-titled debut album dropped and everyone fell in love with hits like "Our Song" and "Teardrops On My Guitar." The mashup ends with her latest original album, evermore. So, what are you waiting for? It's time to get nostalgic with Taylor and find your fave pics of yourself from each era so you can do the Taylor Swift era trend on TikTok just like these seven TikTokers:

1. Use The Green Screen Effect For Your Photos

In order to time out your photos with the songs, use the green screen effect on TikTok. Make sure you have @juliiianne's sound selected. With green screen on, search your camera roll for your chosen photo and record with that photo for the snippet of the song. TikToker @bronanabicth does this perfectly.

2. Choose Photos That Really Fit The Vibe Of The Time

If you really want to show off what an influence Taylor Swift was on you, you can specifically choose photos that match each era. TikToker @artbymycha does this really well, and even matches some of Swift's different hairstyles over the years. But the best is the folklore/evermore photo shoot at the end.

3. Don't Forget To Use Text In Your Video

If you've scrolled past a few of these Taylor Swift trends on your "For You" page, you already know what to expect. But for anyone new to the trend, make sure you put some text up front to let them know this is you at each Taylor Swift era.

TikToker @dylanmarkmurphy does this with a simple, "What I looked like during each Taylor Swift era," text you can add after recording. You can even select to have "text-to-speech" so it reads the text for your viewers.

4. Add The Album Title And Year With Text

Be sure to also add text for each album that includes its name and release year. TikToker @brybrybingbing does this for each picture and even color coordinates the text to each album's color scheme. For instance, Fearless is yellow and Red is red.

5. Set The Duration Of Your Text

To make your text line up with each photo, make sure you're setting the duration as well. There's also an option along with "Text-to-speech" that you can select when you tap on your text. TikToker @megasadgirlhours does this, and even adds an age for each era.

6. Focus On The Fashion Trends

If you want to make your video extra special, focus on the fashion of each era that inspired you. TikToker @chelseaefinn's caption even says, "It’s safe to say that the T Swift has inspired my style throughout the years." And you can really see that from the dark tones of the reputation era to the cottagecore of folklore.

7. You Really Get To See How Much You Grown Up With Taylor

Since Taylor Swift has been releasing music since 2006, you really get to see yourself grow up from then 'til now. It's kind of fun seeing how some fans started out as babies. You might even notice you have an awkward phase at one point like TikToker @juliacvzs, who hilariously says, "Plz turn a blind eye to 2014."