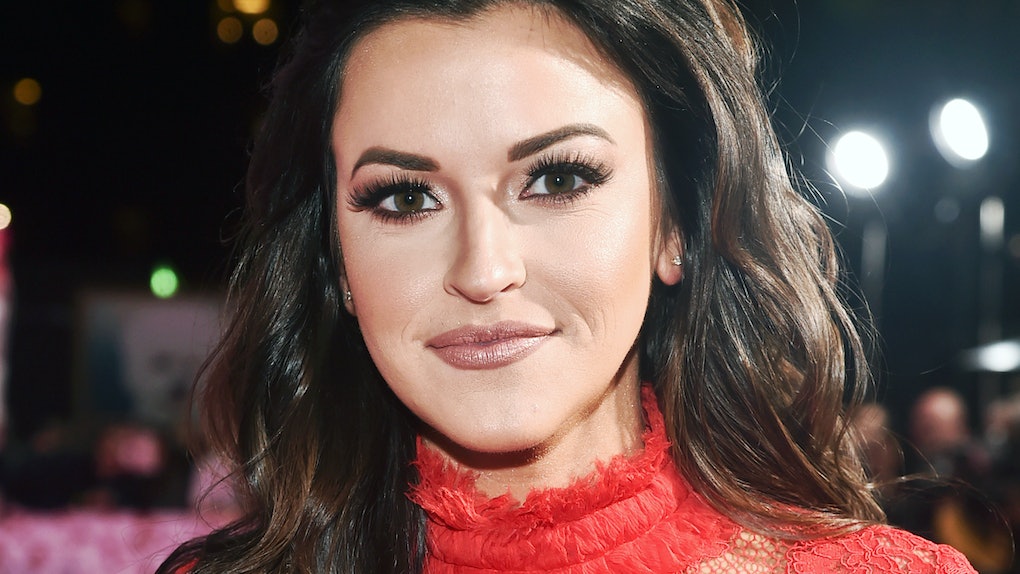 There's nothing like watching ridiculously attractive people risk it all on national television in the name of love. Truly, The Bachelor franchise has a lot to offer, and it doesn't end when the season comes to a close. Many contestants on The Bachelor go on to become successful Instagram influencers with large fan bases. Take Tia Booth: a successful physical therapist with a million-dollar smile, a total hopeless romantic, and ex-girlfriend of the current Bachelor, Colton Underwood. But, while Underwood is currently searching for new love on The Bachelor, Booth's already found it. Tia Booth's new boyfriend Cory Cooper is just about the complete opposite of Underwood, and that might be a good thing.

Now, for those of you who didn't watch Booth on The Bachelor or the most recent season of Bachelor In Paradise, you'll remember that Booth's quest for love was anything but smooth sailing. Booth first appeared on the 22nd season of The Bachelor, where she fought hard for Arie Luyendyk Jr.'s love. While Booth made it relatively far, going home on week eight, she wasn't done trying to find the one. After Booth was on The Bachelor, she met Underwood before he appeared on Becca Kufrin's season of The Bachelorette. They briefly dated before Underwood went on the show, where it came out that he knew and had dated Booth (who was friends with Kufrin from Arie's season of The Bachelor). I know... talk about a love triangle. Finally, Booth and Underwood reunited on season eight of Bachelor In Paradise, where they tried to make it work, but realized that they just didn't want the same things. Underwood ended things on camera, and went on to become the Bachelor.

So, what has Booth been up to since her televised heartbreak? As it turns out, she's doing just fine.

In fact, back in November 2018, Booth confirmed that she was in a new relationship, according to E! News. With a series of adorable snapshots, Booth gave her Instagram followers a glimpse into her love live, which definitely no longer involves Underwood. As E! News reported, Booth is currently dating Cory Cooper of Nashville, Tennessee. According to E!, Cooper is actually a businessman, serving as the Executive Vice President of his family's steel company, Cooper Steel.

Basically, he's a total boss, and these two seem completely head-over-heels for each other.

As Cooper lives and works in Nashville, and Booth lives in Arkansas (in a town called Weiner, no joke), it might seem like the two don't get to see each other a lot, but based on Booth's Instagram, they're making it work. While Booth hasn't said too much about her new relationship, her Instagram posts with him say it all: She's happy.

Additionally, Booth also opened up to Us Weekly about how her relationship with Underwood was a huge part of why she's with Cooper. "People ask about him and I can be nothing but supportive for him, because I’m in this relationship I’m in now because of the show and because of the heartbreak,” Booth told Us Weekly while attending the Isn’t It Romantic movie premiere on Feb. 13, 2019. "So I’m excited." She also added that "It’s going really well," with her current relationship. "I wouldn’t want to be here with anybody else and I think he feels the same, so we're excited to be here."

Booth is showing people everywhere that heartbreak doesn't have to be just an ending. For Booth, heartbreak was the beginning of something new and wonderful, and that's a beautiful thing. The 27-year-old is seriously glowing with happiness, and that's what it's all about, after all.

More like this
Sofia Richie Rumored Boyfriend, Elliot Grainge, Is Reportedly A Family Friend
By Corinne Sullivan
Madison LeCroy Has A New Boyfriend After Those Alex Rodriguez Cheating Rumors
By Lydia Wang
Scott Disick's Quote About Seeing Kourtney Kardashian Date Is Heartbreaking
By Candice Jalili
Stay up to date