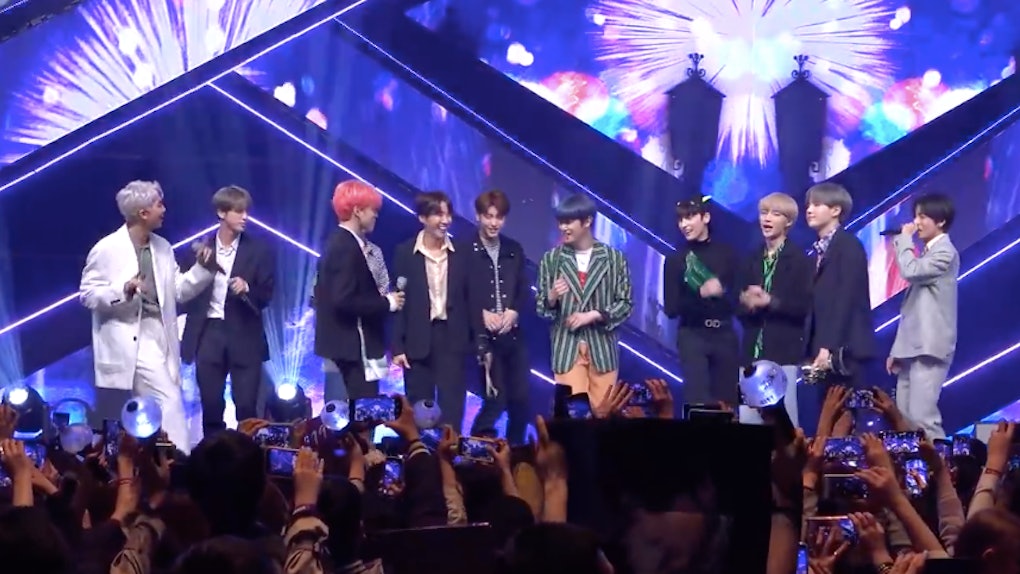 This Video Of TXT Reacting To Getting BTS Concert Tickets Is So, So Pure

TXT’s YouTube reality show — ONE DREAM.TXT — arrived on June 27 to give fans an amazing behind-the-scenes look at the five-member K-pop band while they prepared for their very first showcase tour in America, "Tomorrow X Together Showcase: Star in U.S." which took them to five different cities back in May. Pretty cool, right? In Episode 1, the boys from BTS showed up to offer Yeonjun, Soobin, Beomgyu, Taehyun, and Huening Kai advice on what to expect in America because, you know, they're total worldwide sensations, in case you didn't already know. But it's the video of TXT reacting to getting BTS concert tickets for their May 11 show in Chicago in Episode 3 that you really need to see, because the quintet legit loses their minds and the whole thing will just be so relatable to any ARMYs watching.

OK, so before we get to that unbelievably epic moment, let's take a look back at the inaugural episode of ONEDREAM.TXT to see all the amazing guidance Jungkook, Jin, V, RM, Suga, J-Hope, and Jimin offered up. For example, one of my favorite moments was when Soobin revealed that TXT was worried about their first showcase and what to expect in America.

"What should we watch out for?" he asked BTS.

Then Jungkook added: "They have a more free atmosphere."

RM also explained to TXT how the seven members of BTS got a great reaction from the audience during their own U.S. showcase, but not for the reasons you might think.

"I don’t necessarily think it’s because we were good," he admitted. "But we were really aggressive. We weren't messing around. We really wanted to show them something. I think that’s what the American fans are expecting, and looking forward to from you guys. And if you show them exactly that, you’ll get a great reaction."

I'm pretty sure BTS has been more than generous when it comes to doling out advice to their new little-brother group. Remember this tweet from back in March of the very first picture of BTS with TXT?

According to fan translations, the caption accompanying the tweet read, "Thank you so much for giving us time and saying such nice things to us with good advice. We will do our very best to be your juniors! We love you."

So yeah, that was probably taken the day they all filmed Episode 1.

Now fast-forward to Episode 3. After TXT successfully completed a mission in the rain, the staff surprised them with... tickets to that May 11 BTS' Love Yourself: Speak Yourself concert at Soldier Field in Chicago.

I love how Yeonjin's eyes got super-wide once he saw what was in the envelope, and how Hueningkai and Soobin's mouths dropped open. The whole thing is just so cute as they jump around in the rain with their umbrellas that I could legit watch it on a loop all day.

But don't take my word for it. Check out the entire episode below, or skip right to all of the adorable reactions at around 2:56:

Could BTS and TXT's relationship be any cuter?!