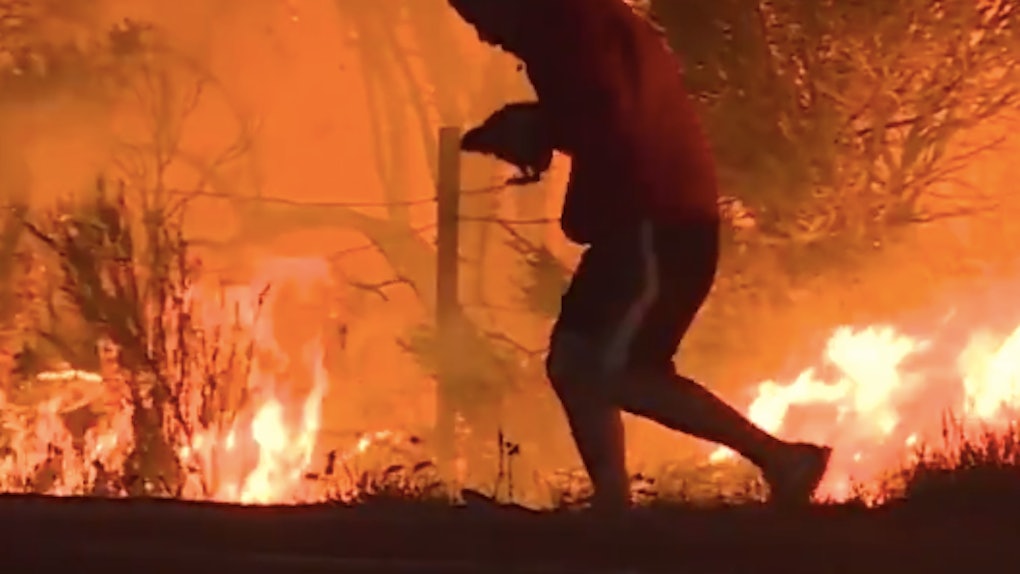 If you've been following the news lately, then you're probably familiar with the wildfires that have been devastating Southern California. As families are forced to evacuate their homes, neighbors are relying on one another to get through this ordeal. Humans aren't the only ones affected by the blaze, though, and one man did all that he could to help a little creature get out of harm's way, and it was caught on tape. This video of a man saving a bunny from California wildfires will restore your faith in humanity.

The CNN Twitter account posted the video on Thursday, Dec. 7. According to CNN, the video of the dramatic rescue was taken along a Ventura County freeway. You can see that the man ventures dangerously close to the flames after he notices a wild rabbit enter into the flame-engulfed brush. Dressed in merely shorts and a hoodie, he appears visibly panicked as he runs after the rabbit in attempt to save it from the growing inferno.

Initially, the wild rabbit doesn't go to the would-be hero, but that doesn't stop the good samaritan from jumping up and down and doing all that he can to get the rabbit's attention. As you watch the video, you can truly sense this individual's growing concern over the rabbit's safety. His valiant efforts finally pay off when the rabbit acquiesces to the man's pleading and jumps into his arms to safety.

You can hear in the video that the onlookers were at first confused by the man's wild gesticulations, but they soon realize that his actions were that of desperation to get the rabbit to safety. If you're welling up right now, that's totally understandable.

The genuine care and concern with which this unnamed man acts is clearly conveyed through his actions, and if you were thinking that he was doing it for the spotlight, that was not the case. The video was taken by chance as a news reporter happened to catch the heroic moment, and the man declined to comment.

The California wildfires have been raging since Monday, Dec. 4, and over 100,000 acres of land have burned with little containment. Given the grave circumstances, people were filled with hope once this video began to make its way around the internet.

This was a reminder that all is not lost, and there is still good to be found in this world.

This man's actions spoke loudly, and they conveyed his compassion.

He is the very definition of a "good guy."

In the toughest of circumstances, this man served others before protecting himself.

You can never have too much hope, and actions like this one inspire it in all of us.

Humanity in action is a welcome sight.

"Hero" is the label being given to the unnamed individual, and from the looks of the video, it appears to fit him quite well.

While this video is a hopeful one, the wildfires in Southern California are still far from being safely contained. According to CNN, the brush burning index, as of Thursday, Dec. 7, is currently sitting at 296. For reference, an index of 165 or higher is an indicator of extreme danger.

Some people have lost everything along with their homes, and others are still being evacuated away from the wildfires. If you're hoping to follow the lead of the man in the video, you can help the victims of the Southern California wildfires by volunteering with the Red Cross if you're in the area, or you can help from afar by donating directly to evacuees.

As firefighters continue to do their best to contain the wildfires, people will continue to come together and help one another through this trying time. Judging from the bunny rescue, there is (thankfully) no creature too small to save.