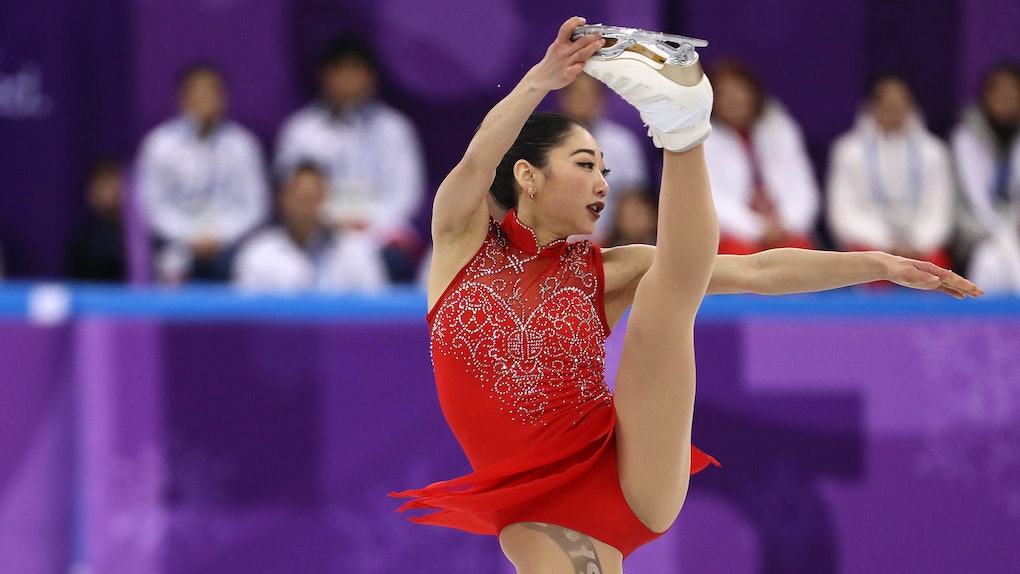 Watching all of the Winter Olympics athletes out there doing their damn thing has truly had my jaw constantly on the floor. Seriously guys, I can only imagine the passionate dedication and commitment it takes for these athletes to nail such impressive, and sometimes even dangerous moves. But when I saw a video of Mirai Nagasu training for her triple axel jump, I got a little peek into just how intensive and wild it can be for competitors to master their sport.

In case you haven't heard by now, on Feb. 11, Mirai Nagasu became the third woman in the world to successfully land a triple axel jump — aka a jump that involves three and a half rotations in the air before landing on one foot — in Olympic figure skating, as well as the first American woman ever to successfully land the tricky jump. And somehow, she still manages to make it all look so incredibly effortless.

Nagasu showed her competitors who was freaking boss during the women's free skating portion of the Winter Olympics with all of her grace and ease in nailing what is known as the most difficult of all six triple jumps in figure skating, according to USA Today. Needless to say, when it came time for the triple axel in Nagasu's routine Monday night, everyone was holding their breath in anticipation.

And then Nagasu floored us all as she stuck the landing like she'd been doing triple axels since emerging from the womb.

Seriously, how? Just, how.

On the real, Nagasu made the triple axel look so effortless and simple that I legitimately believed I could do it, too — you know, if I really tried. I then attempted to do a single spin in the air after launching myself off my living room couch, and... I'm just embarrassed at this point, OK?

As I'm sure you could imagine, it takes years and years of practice to master the technique involved in figure skating in general, let alone one of the sport's most difficult moves, which has only been accomplished by a small handful of athletes. In case you're wondering what exactly goes into all that training, Nagasu posted a behind-the-scenes video to Instagram that shows us how she gets comfortable leaping up in the air and twirling three times before landing back down on the ice on one leg. Side note: Is anyone else exhausted just thinking about that, or is just me?

To master the jump, Nagasu trains with the help of a device called the Champion Skating Harness. TBH, it looks like a freaking blast.

According to SELF, the Champion Skating Harness is a device that assists figure skaters in tightening and pulling in their bodies so that they can more effectively rotate while they're airborne.

Here's how it works: The figure skaters are clipped into the harness, which is a part of an intricate pulley system that's hanging from the ceiling. As they jump, the skater's coach has to immediately pull down on the rope to keep them lifted while they practice the jump, and follow it up with a safe landing.

BTW, don't think for even a second that just because you're secured in a harness, your muscles aren't still putting in serious work here. You essentially have to engage every single muscle in your body to perform and successfully land a triple axel, even when you're practicing it with the assistance of this fancy looking apparatus. So yeah, in case it wasn't already clear, Nagasu is a total badass, and she's strong as hell.

But no matter how strong you are, figure skaters have to commit to a ton of practice both on and off the ice before they can even attempt such wildly challenging jumps as the triple axel.

The Champion Skating Harness is a safe way to master coordination and bodily alignment, so when it comes time to perform the triple axel on ice, it won't be as intimidating.

Along with having flawless coordination, impeccable timing, and incredible core strength, figure skaters also need to stretch their bodies for literal hours every day to make sure that their muscles are loose — but not too loose.

Honestly, I'm exhausted and sweaty just thinking about all of that effort. But while I sit here and try to pick my jaw back up off the floor, Nagasu will be back and ready to wow us all again on Feb. 21 in the women's figure skating competition. Until then, you can probably catch her chillin' somewhere near a Champion Skating Harness — just a wild guess.