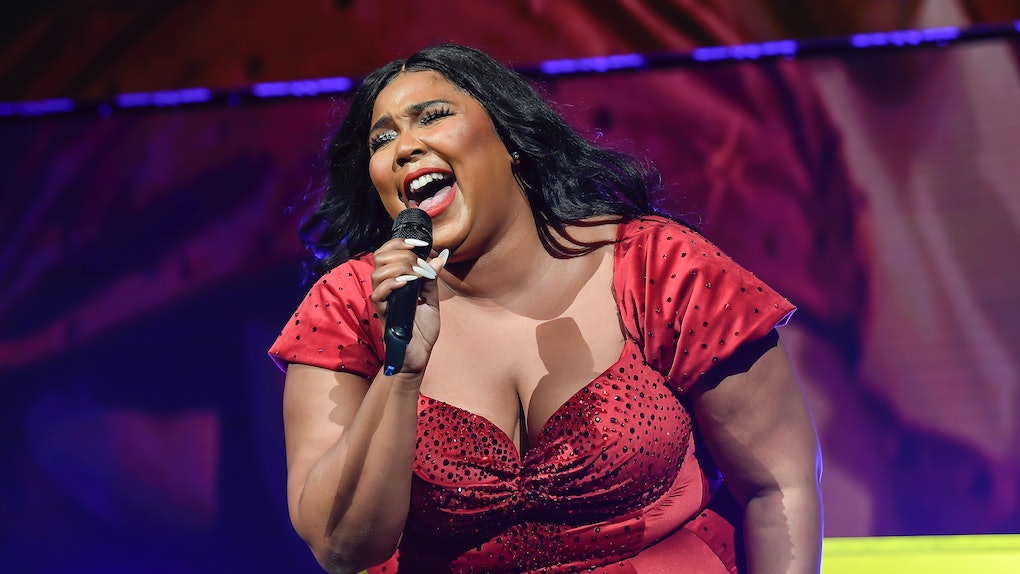 KISS FM held its annual Jingle Ball concert on Friday, Dec. 6 in Los Angeles at The Forum. With some of the biggest artists in the line up including BTS, Halsey, Billie Eilish, Katy Perry, Sam Smith, and Lizzo, to name a few, it was a musical celebration for the books. But nothing is going to make you lose it more than this video of Lizzo asking fans to pretend she's Jimin from BTS.

BTS was the first group to kick off performances, dressed in white and performing "Boy With Luv" alongside Halsey. The crowd was undoubtedly full of ARMYs, as the audience's screams were called "venue-shaking" by Billboard. The K-pop group performed plenty of hits to keep fans happy.

When Lizzo took the stage, she literally shone with a sparkly silver top, a pair of cutoffs, and a cape that looked just like what Mrs. Claus would be wearing. KISS FM's report of the event said Lizzo was an inspiration for attendees.

Right before the video of Lizzo asking fans to pretend she's Jimin, Lizzo was telling the crowd to "close [their] eyes and say 'I love you, me," following up with "this is a very no-judgment crowd." She really, really wanted to hear the audience cheer like they did when BTS took the stage at the opening of the show, though, so she asked them to cheer again, saying: "One more time can you pretend that I’m Jimin from BTS? Wow so that’s how the other side lives!”

You can watch the video here:

Fans may be losing it over the mention, but the background behind Lizzo's relationship with BTS makes this whole event even funnier.

Lizzo posted a video of BTS' "Boy With Luv" on her Instagram on May 4, but the music was dubbed over with Lizzo's own song, "Juice." She captioned it: "LIVE FROM THE TOP 2 ALBUMS IN THE COUNTRY The Lizzo x @bts.bighitofficial collab we need." However, Lizzo had never actually heard any music from BTS until recently.

She first listened to the K-pop group in August, when she was on CBC Music's game of Jam or Not a Jam and the station played "Boy With Luv" for her. Initially, Lizzo was a little ~confused~ until she finally realized who it was. "Now I know why people sleep outside in tents for days," she said. "That was sexy. That was sexual, actually."

So it's safe to say that Lizzo is a fan of BTS, too. And who could blame her for wanting to live the BTS lifestyle by having crowds pretend she is a member of the group? Maybe someday fans will get a real collab between Lizzo and BTS, but until then, this viral video will totally suffice.